A very troubling new Security Council (SC) report circulating in the Kremlin today states that the American shadow government “Deep State”, this past week, sent a warning message to President Trump to not dare fire ex-FBI Deputy Director Andrew McCabe, with the former Obama-Clinton regime Attorney General Eric Holder grimly declaring “you want to rumble, let’s rumble…you want to have a knife fight…we’re gonna do it”—but that forces loyal to Trump ignored by firing McCabe just hours ago—and that was quickly retaliated against by the “Deep State” controlled Electronic Gulag whose member Facebook immediately extinguished one of Trump’s top 2020 presidential campaign sites—while at the same time, the Ministry of Defence (MoD) has just warned of the American military forces illegally in Syria: “We’re registering the signs of the preparations for the possible strikes. Strike groups of the cruise missile carriers have been formed in the east of the Mediterranean Sea, Persian Gulf and Red Sea.”  [Note: Some words and/or phrases appearing in quotes in this report are English language approximations of Russian words/phrases having no exact counterpart.]

According to this report, the “Deep State” aligned Electronic Gulag is an internet based political labor camp whose main members are Google, YouTube, Facebook, Wikipedia and Twitter wherein Western elites are able to control the narrative while censoring Christians and Conservatives—with anyone who expresses scepticism to them being seen as an “enemy of the state”—and who, this past week, revealed their true dark power when Twitter censored the most popular Conservative news site in America, called the Drudge Report, for its posting President Trump’s new 2020 presidential campaign slogan “Keep America Great!”. 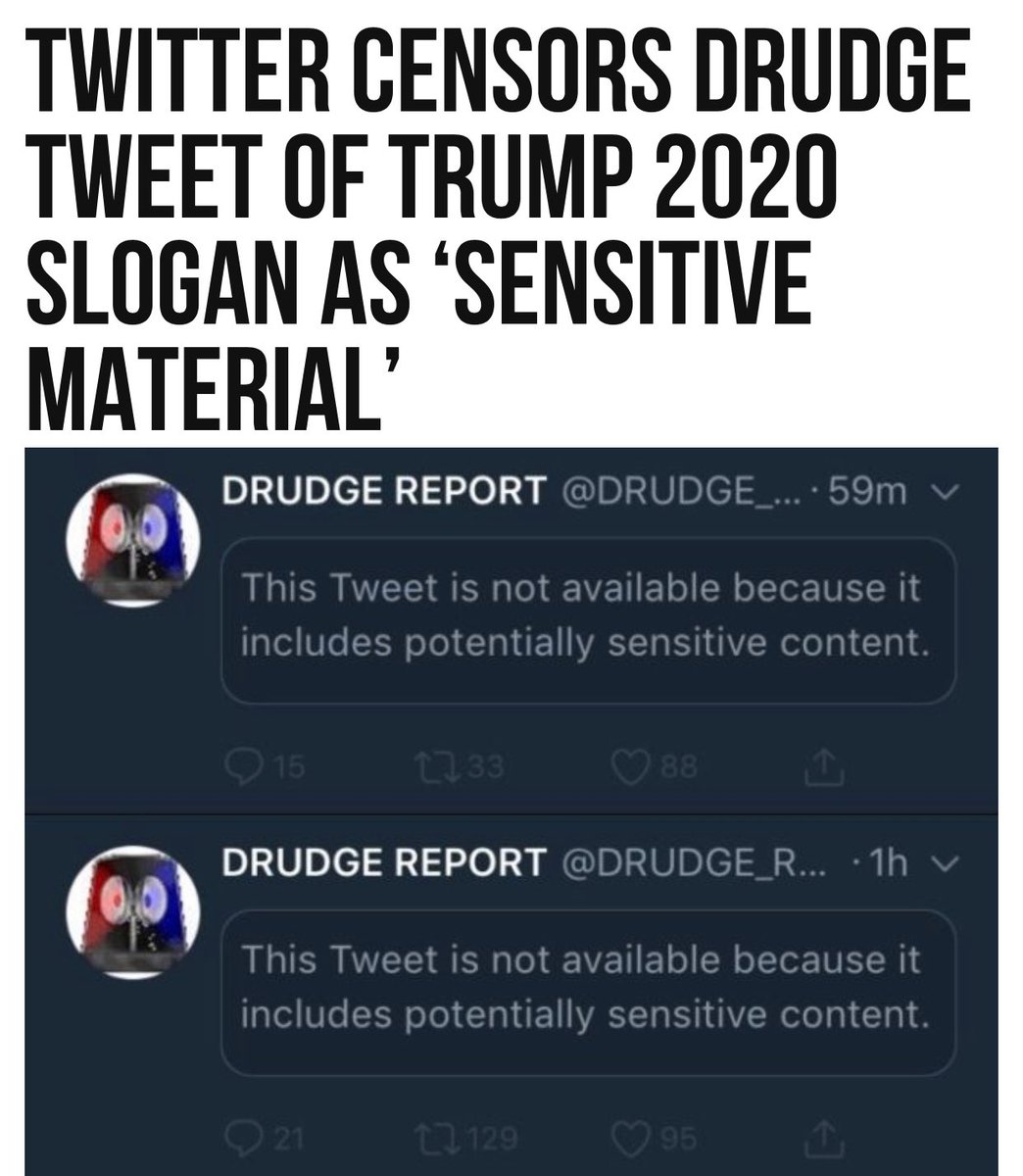 In censoring the Drudge Report for its posting President Trump’s new 2020 presidential campaign slogan, this report says it’s important to note, the “Deep State” aligned Electronic Gulag member Twitter, also, openly showed for the first time its deep satanic roots by its depicting the “demonic owl graven image”—whose over 40-foot graven image of is worshiped by the most powerful Western elites every year in a place in California named Bohemian Grove where “mock human sacrifices” are preformed at its feet—and one of whose members, California Democratic Party US Congressman John Garamendi, this past week directly threatened President Trump by declaring: “It is time to get this guy out”. 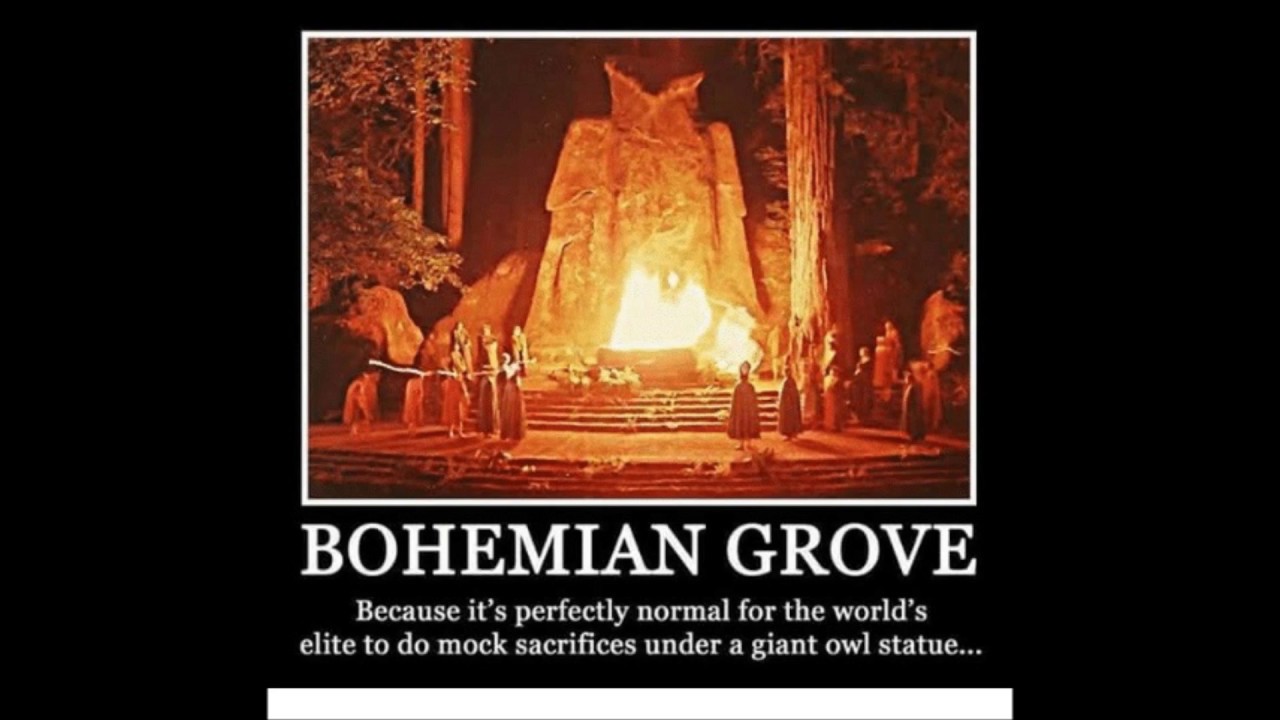 As to why the “Deep State” has unleashed the full force of its demonic Electronic Gulag against President Trump, this report explains, is due to Trump loyalist forces refusing to back down against them—and as just exampled by the firing of ex-FBI Deputy Director Andrew McCabe, who was one of the “Deep State’s” most loyal operatives—but who became ensnared in President Trump’s long running investigation into “Deep State” crimes against the American people known as the Department of Justice Inspector General Report—that is expected to be released in the coming weeks and whose contents of former FBI Assistant Director Chris Swecker warns will be “Pure TNT” and “shake the American people to their core”. 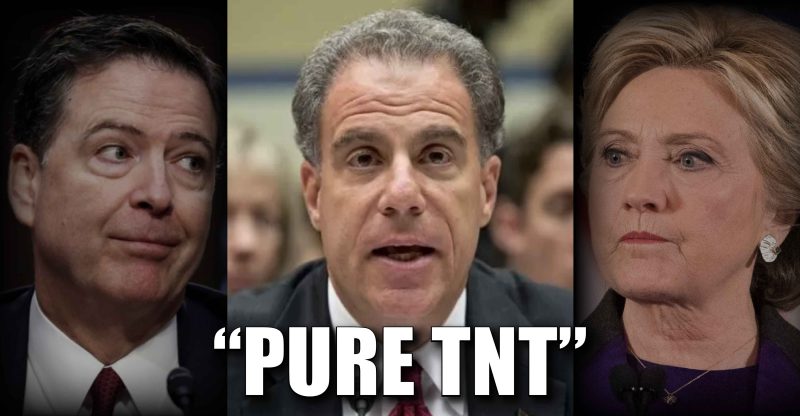 In knowing that the only way to protect themselves from this soon coming “Pure TNT” explosion is by igniting a global war, this report grimly warns, “Deep State” aligned forces in Britain this past week began a massive Western propaganda campaign pushing a completely false Russian spy poisoning story based upon the exact same propaganda methods used to ignite the US-UK 2003 invasion of Iraq because of deliberate lies that it had weapons of mass destruction—with the Electronic Gulag, also, aiding in this mass propaganda effort by censoring and suppressing some of the most critical questions any normal investigation would seek to the answers to, and that include:

1) Porton Down has acknowledged in publications it has never seen any Russian “novichoks”.  The government has absolutely no “fingerprint” information such as impurities that can safely attribute this substance to .

2) Until now, neither Porton Down nor the world’s experts at the Organization for the Prevention of Chemical Weapons (OPCW) were convinced “Novichoks” even exist.

3) The is refusing to provide a sample to the OPCW.

4) “Novichoks” were specifically designed to be able to be manufactured from common ingredients on any scientific bench.  The Americans dismantled and studied the facility that allegedly developed them.  It is completely untrue only the Russians could make them, if anybody can.

5) The “Novichok” programme was in not in .  Its legacy was inherited by the Americans during their alliance with Karimov, not by the Russians.

With a British court having just ordered that MI6 operative Christopher Steele, the creator of the fake “Trump-Dossier” document paid for by Hillary Clinton and the Democratic National Committee, must give a video deposition about in the United States (and that Steele said he will not appeal this ruling of), and that the alleged poisoned Russian double agent spy recruited by Steele was set to prove was entirely created by MI6 to destroy President Trump, this report continues, the “Deep State’s” full machinations for making up this spy poisoning story in the first place was in order to link it to Syria—and as shockingly detailed by the “Deep State” aligned US Ambassador Nikki Hayley—who, yesterday, at the United Nations, outrageously suggested that there is “some link” between Russia’s involvement in the Salisbury case and its alleged failure to ensure that the Syrian government destroys its chemical weapons—though she was not bothered by the fact that the Organization for the Prohibition of Chemical Weapons (OPCW), a UN watchdog, and the Pentagon confirmed that the Syrian government’s chemical weapons had actually been destroyed.

Choosing not to go by the “some link” theory put forward by the “Deep State” in the United Nations regarding an alleged chemical weapon used to attack a Russian double agent spy in the UK and Syria, this report says, the Ministry of Defense has, instead, continued to use the long and accepted practice of the “evidence first” method of discovery of facts—and that this past week shockingly led to the discovery in the liberated Eastern Ghouta (Syria) farmlands, between Shifouniyeh and Douma, of a well-equipped chemical laboratory run by Saudi-backed Islamist terrorists—that “not a single Western reporter showed up to investigate”.

Even worse, this report grimly notes, the Ministry of Defense, just hours ago, reported that “US instructors” are training Islamic militants to stage false flag chemical attacks in south Syria, and in their emergency bulletin state: “They are preparing a series of chemical munitions explosions.  This fact will be used to blame the Syrian government forces.  The components to produce chemical munitions have been already delivered to the southern de-escalation zone under the guise of humanitarian convoys of a number of NGOs.”—and that—“The Al-Nusra Front terrorist group, in coordination with the White Helmets, have already received 20 containers of chlorine to stage an incident.”

The Ministry of Defense, also, in their just released emergency bulletin, this report notes, states that “Deep State” aligned US military forces have already pre-positioned themselves to start a global war in Syria—and who further state: “The provocations will be used as a pretext by the United States and its allies to launch strikes on military and government infrastructure in Syria...and we’re registering the signs of the preparations for these possible strikes with Strike groups of US cruise missile carriers now being formed in the east of the Mediterranean Sea, Persian Gulf and Red Sea.” 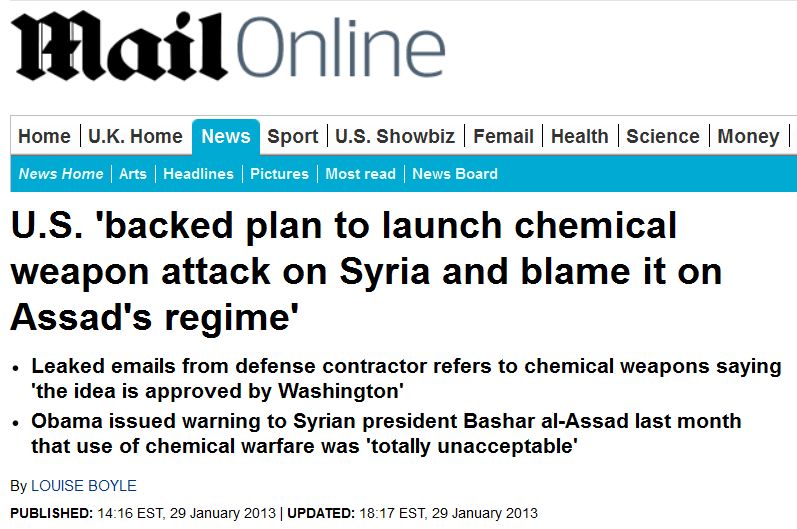 ’s Daily Mail pulled down this article shortly after publishing it—but it can still be read HERE.

Unlike in 2013, when the “Deep State” aligned Obama regime was exposed for plotting a “false flag” chemical attack on Syria, this report concludes, Russian military forces, since 2015, are now operating there too—and that should the US and UK begin carrying out strikes upon Syria in their newly planned chemical weapon “false flag” attack, will be met with “over equal” retaliation—and is why the Ministry of Defense, for the first time in its history, authorized the release this past week of the stunning highly classified information that Russian nuclear submarines had quietly reached the United States coastline and left undetected—thus ensuring that the warning time for the obliteration of American cities would be measured in mere minutes—with none of the millions of American dead ever being allowed to know beforehand that this war was “never about ideology, but geography”. 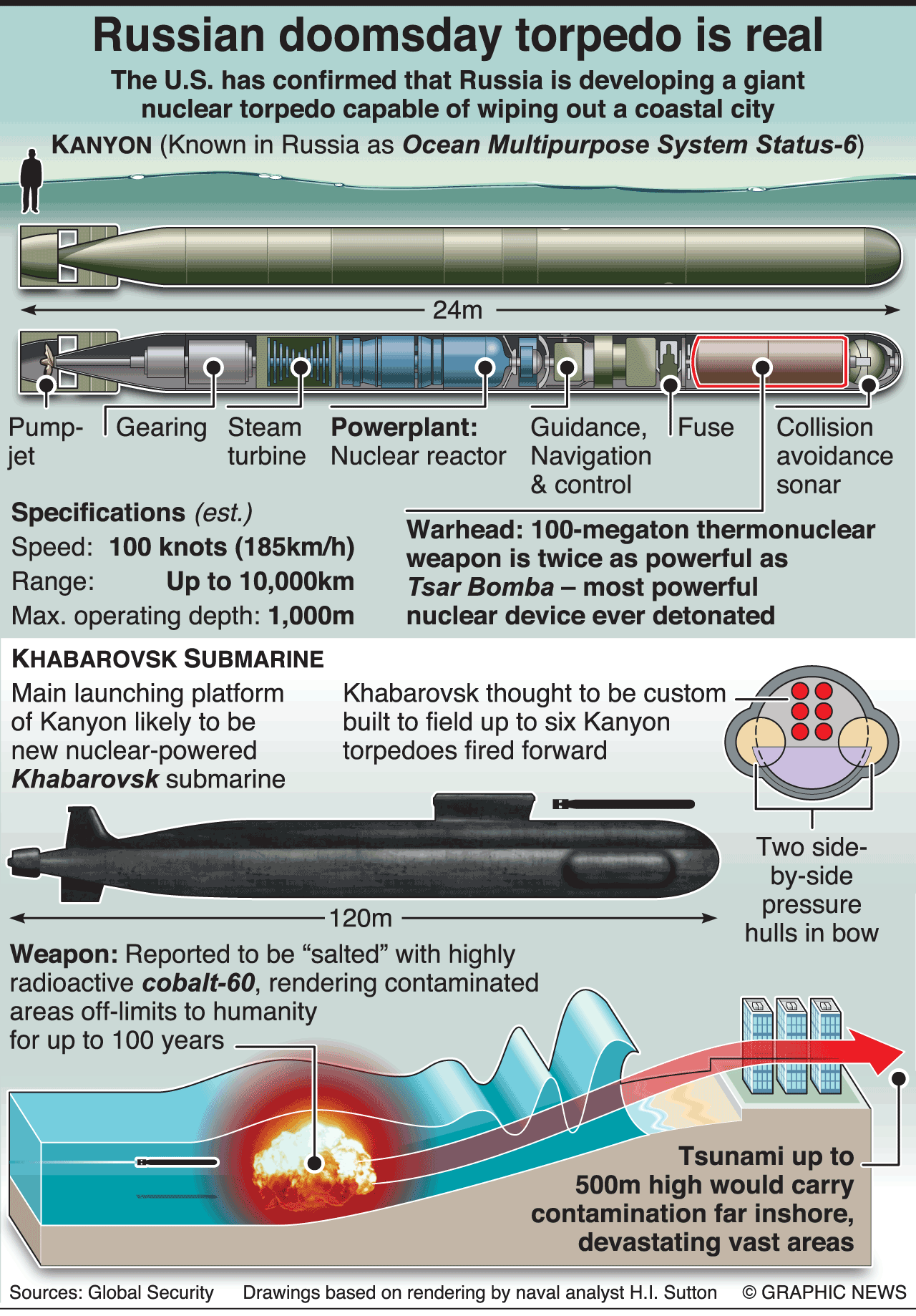 March 17, 2018 © EU and US all rights reserved.  Permission to use this report in its entirety is granted under the condition it is linked back to its original source at WhatDoesItMean.Com. Freebase content licensed under CC-BY and GFDL.