A shocking new Ministry of Foreign Affairs (MoFA) report circulating in the Kremlin this afternoon states that the grim hypocrisy of Western democratic values is on full display today in the Kingdom of Spain after that European Union (EU) monarchy launched what is being called the “World’s first Internet War” to prevent the peoples of Catalonia from being able to vote on their independence—with hundreds of these peoples shockingly being met with bullets as they tried to vote, and who now lay bloodied on their streets.  [Note: Some words and/or phrases appearing in quotes in this report are English language approximations of Russian words/phrases having no exact counterpart.] 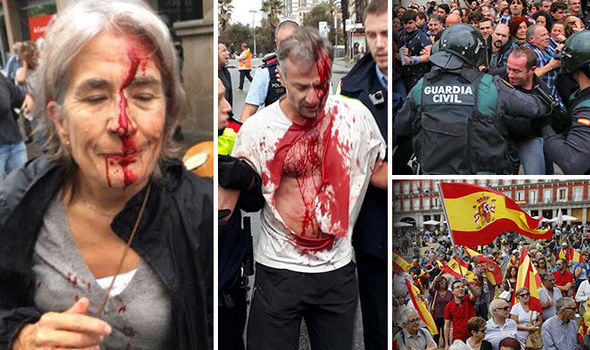 According to this report, the Kingdom of Spain is a dictatorial monarchy ruled over by King Juan Carlos I, who nominates and appoints all members to the Council of Ministers that is, in turn, presided over by the Prime Minister—and that is now in open declared warfare against the peoples of Catalonia.

Catalonia, this report continues, is an autonomous community of 7.5 million people located on the eastern extremity of the Iberian Peninsula and designated as a “nationality” by its Statute of Autonomy—and that consists of four provinces named Barcelona, Girona, Lleida, and Tarragona, with its capital and largest city being Barcelona—which is the second-most populated municipality in Spain, and the core of the seventh most populous urban area in the European Union. 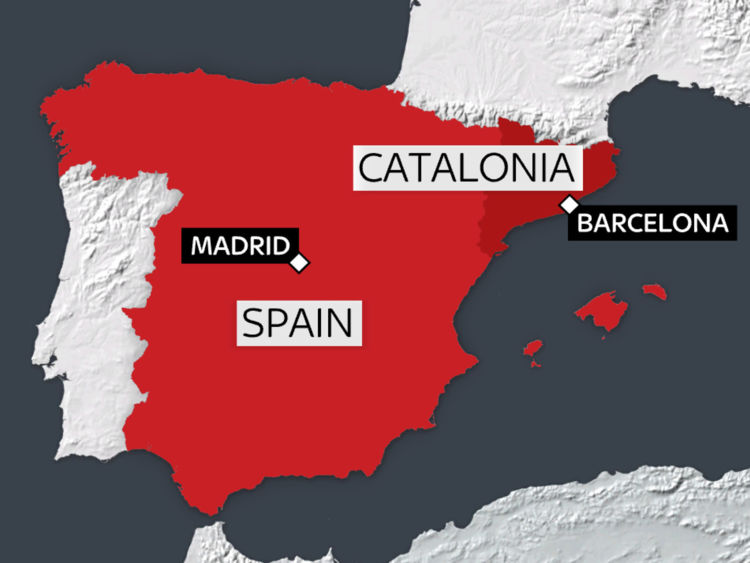 Unknown to many Westerners, this report explains, is that Catalonia is a conquered and occupied nation whose Kingdom of Spain overlords have long persecuted these peoples—including the banning of their language, the murder of their leaders and, during the 1930’s, the bombing of their cities.

After the death of Kingdom of Spain fascist dictator Francisco Franco, in 1975, this report details, Catalonia regained its autonomy, there after securing enhanced judiciary and taxation powers following a landmark vote in 2006—but that, in 2010, was struck down by the Constitutional Court of Spain who shockingly ruled that parts of Catalonia’s autonomy statute were unlawful, and that references to it as a nation had “no legal validity”.

In November 2014, this report continues, Catalonia's government continued its bid for freedom by holding an informal referendum in which more than 80% of its citizens voted in favor of independence—and who, today, are holding an official vote having a simple yes/no ballot paper asking their peoples: “Do you want Catalonia to become an independent state in the form of a republic?” 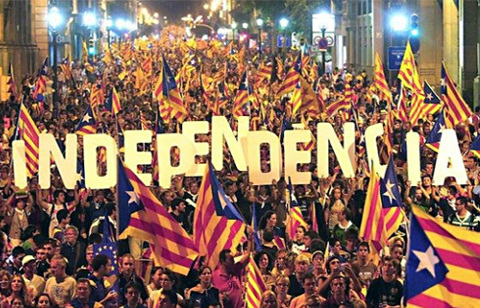 Today’s vote, this report explains, was approved by the Catalonia parliament on 6 September—but was struck down the next day (7 September) by the Constitutional Court of Spain—immediately after which, Spanish Prime Minister Mariano Rajoy scolded the Catalonia peoples like babies telling them that their actions were an “intolerable act of disobedience”—and his further vowing to “stop at nothing” to prevent these peoples from being able to vote for their freedom.

Like all Western colonial powers have done for centuries, too, against their conquered and subjugated populations they consider inferior, this report notes, the Kingdom of Spain sent thousands of police troops to prevent this independence vote from occurring—imposed a de facto “State of Emergency” in Catalonia, thus allowing them to round-up and arrest this independent nations political leaders—and, most shockingly, shut down Catalonia’s entire voting computer system—and that led Wikileaks leader Julian Assange to accuse Spain of conducting the “world’s first internet war”.

But even while facing these brutal Kingdom of Spain police state actions against them, this report notes, the peoples of Catalonia remain defiant—but with over 337 of them now reported to be gravely wounded as Spanish police troops continue to destroy polling stations and open fire on masses of unarmed peoples with grenades and rubber bullets. 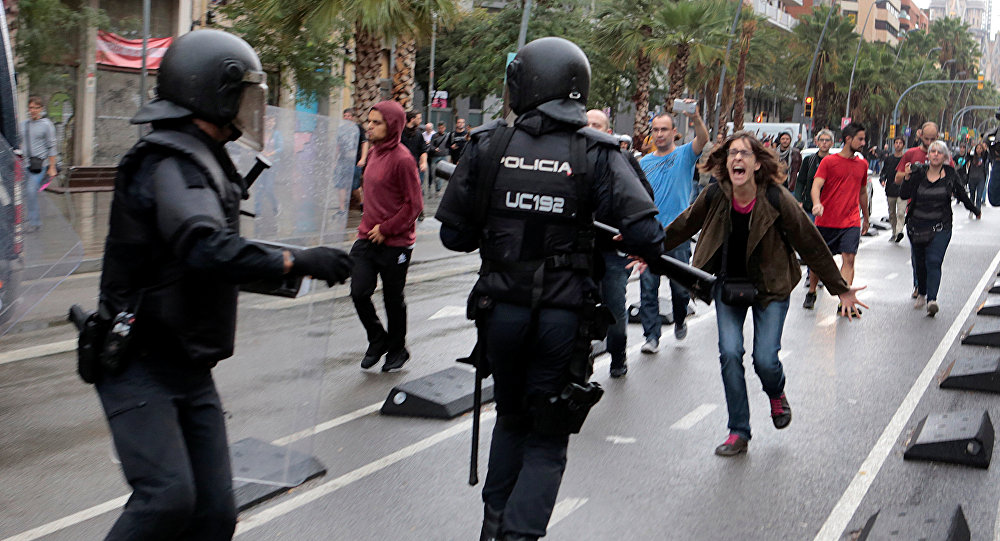 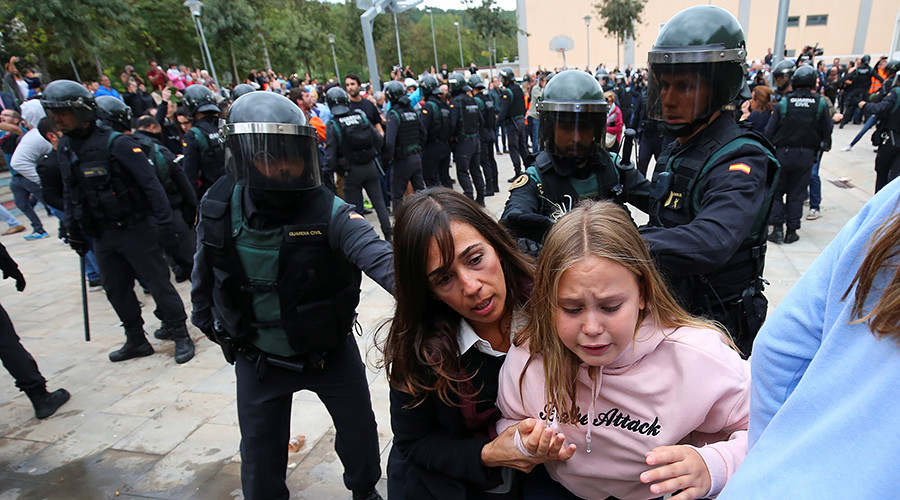 But to the most shocking action against the peoples of Catalonia by the Kingdom of Spain to prevent their voting for freedom today, this report says, is troubling new evidence suggesting that the 17 August 2017 terror attacks in Barcelona (that killed 13, and wounded over 130) were, in fact, a “false flag” attacked designed to discredit Catalonian leaders.

What this new evidence shows, this report details, is that last month, as the referendum fervor in Catalonia was heating up, leading Spanish daily newspaper El Periódico published a document, less than an hour after this terror attack occurred, alleging that the CIA had warned the Catalonia police about a potential attack in Barcelona—and this document stating that three months before the attack, the CIA had warned the Catalonia police [the Mossos d’Esquadra (MOSSOS)] of “unsubstantiated information of unknown veracity“ pointing to a summer attack in Barcelona—and that named Las Ramblas as a potential target, which it was. 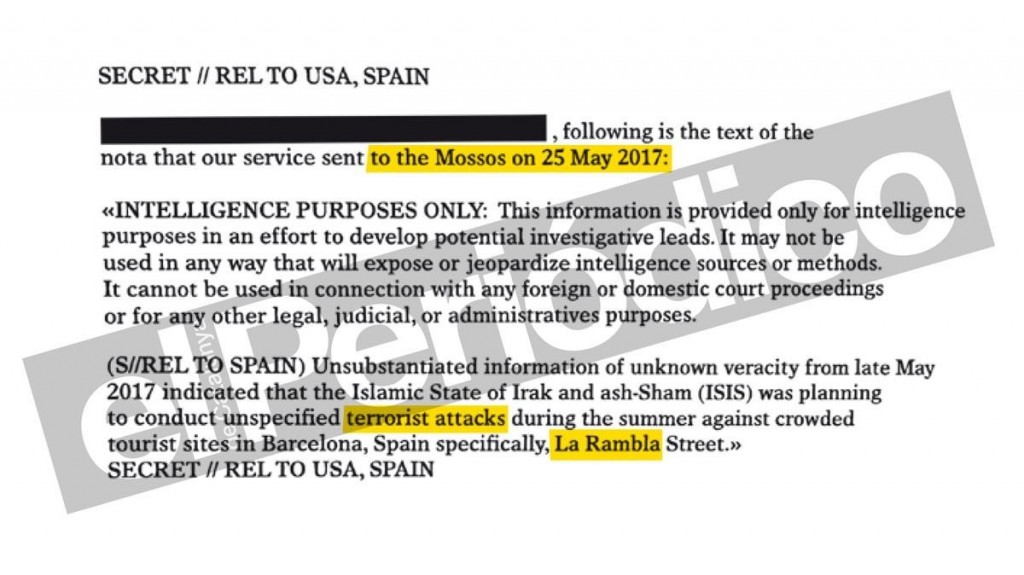 Should this fake CIA document have been true, this report explains, it would have resulted in a catastrophic loss of faith among the entire Catalonia peoples towards their government leaders, and would have, most assuredly, doomed today’s independence vote—but that Enric Hernàndez, the director of the El Periódico newspaper, had to backpedaled about in response to questions about the document’s veracity—with his stating during an interview with a Catalonia radio station, on the same day he published the purported CIA warning, that it was the US National Counterterrorism Center, not the CIA, that had sent the warning to the Catalonia police.

In response to a request under the Freedom of Information Act (FOIA), this report further notes, the US National Counterterrorism Center stated that it had no record of any communications sent in 2017 between its office, Spanish counterterrorism police, or the Catalonia police—but that Enric Hernàndez argued was because the communication was classified, and thus there would have been no record available under FOIA—an excuse quickly slammed by Sally Nicholson, FOIA Chief for the Office of the Director of National Intelligence, the agency responsible for National Counterterrorism Center records, who bluntly stated that in the case of her agency, that is not how it works, and who said: 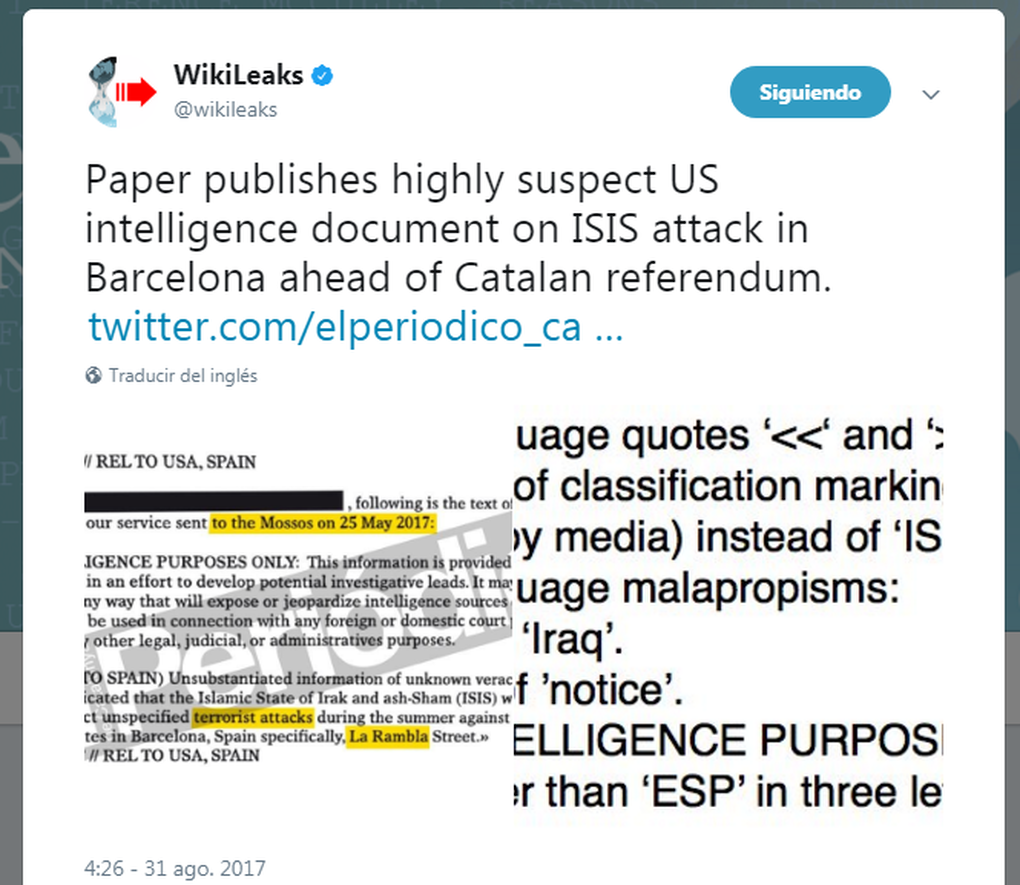 Under the pressure of international experts from around the world, this report continues, the El Periódico newspaper was, finally, forced to admit that it made up this CIA document—leaving unanswered the questions as to how much the Kingdom of Spain really knew about the 17 August terror attack in Barcelona before it happened—and why they tried, but failed, to blame it on Catalonia police and government officials in order to discredit today’s independence vote.

This report concludes by stunningly noting that neither the US or EU is condemning, or even reporting on, the Kingdom of Spain for its brutal treatment today of the Catalonia people, who are only seeking to achieve their goal of freedom—thus proving, once again, that these Westerners only believe in democracy when it serves the interests of their own elites—but for ordinary peoples of the world is NEVER to be allowed, or tolerated—and as evidenced by the peoples of Crimea, in 2014, having 95.5% of its citizens vote for independence from Ukraine so they could join with Russia—and that destroyed the West’s narrative of Russia being an “evil nation”, but that they could never allow to happen or let their modern day colonial subjects know truthfully about.

October 1, 2017 © EU and US all rights reserved.  Permission to use this report in its entirety is granted under the condition it is linked back to its original source at WhatDoesItMean.Com. Freebase content licensed under CC-BY and GFDL.