Just two days after the oldest living member, Prince Dimitri Romanov (1926-2016), of the House of Romanov (that ruled Russia from 1613-1917) died, the Security Council (SC) is reporting today that it has received a declaratory document from the Civic Chamber (CC) advocating that President Putin be installed as the royal Tsar having supreme power over the Motherland and Church (ROC) as a “necessary/needed” action to prepare the nation for Holy War against the satanic West who, among many of their moral crimes against humanity, have shockingly passed a law allowing the prostitution of children in the State of California in order to appease their “new gods/ idols” called “Hollywood celebrities”.  [Note: Some words and/or phrases appearing in quotes in this report are English language approximations of Russian words/phrases having no exact counterpart.] 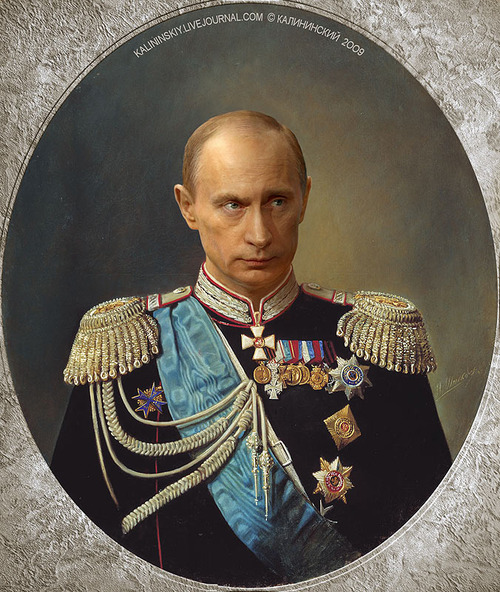 According to this report, this Civic Chamber declaratory document advocating that the constitution be changed so that President Putin can be declared Tsar was pushed forward by top Putin advisor Aleksandr Dugin and The Very Reverend Archpriest Vsevolod Chaplin (who is the most recognizable person in the Russian Orthodox Church after His Holiness Patriarch Kirill), and who publically stated about this action: “While we don't have a formal monarchy, we have monarchic understanding that Russia cannot be without a tsar.  But this tsar must take advice from people, which is why having a nation is so important.”

Critical to understand about this Security Council report is that Russia is now, and always has been, a Christian theocracy (though subdued by Communism between 1917-1991) , which is a form of government in which God is the source from which all authority derives and whose conflicts are “directed/authorized” by a Tsar who is the leader of the Russian Orthodox Church—such as this past year when His Holiness Patriarch Kirill, in absence of a Tsar, declared a world-wide Holy War on Islamic terrorism. 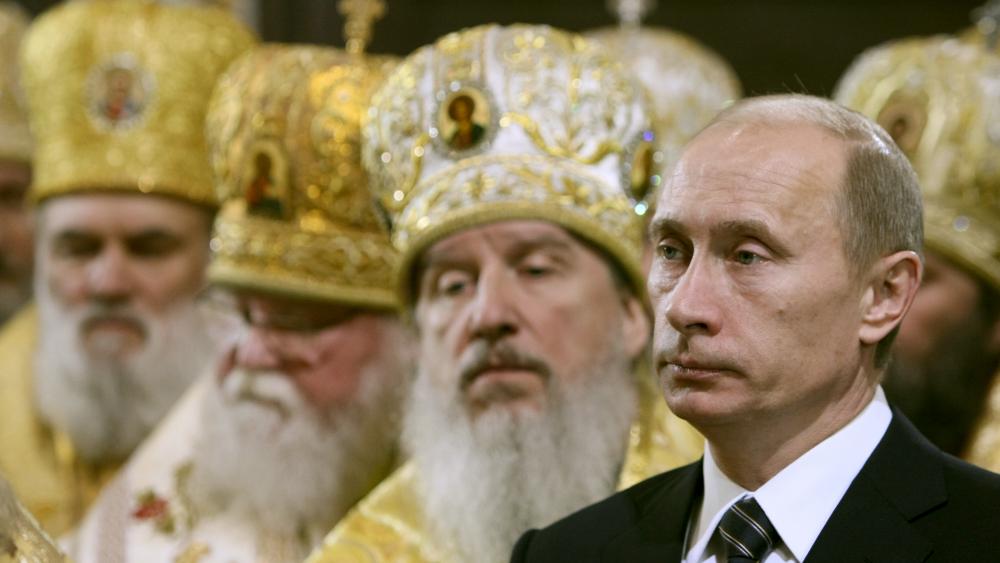 With President Putin being declared a royal Tsar as this Civic Chamber declaratory document advocates, it must be understood, his ability to declare a Holy War would not be able to be challenged as he would be imbued with “divine knowledge” not known to ordinary persons—and is why the West has responded to what they see as their most dangerous threat by unleashing the largest military buildup since the Cold War all along their borders with Russia.

As well as this massive military buildup, the West has, likewise, increased their propaganda campaign against Russia using their Hollywood elites as well every mainstream media outlet too—and that is, literally, spinning out of control with more “fake news” stories being published about Russia being proved as lies faster then they can be retracted. 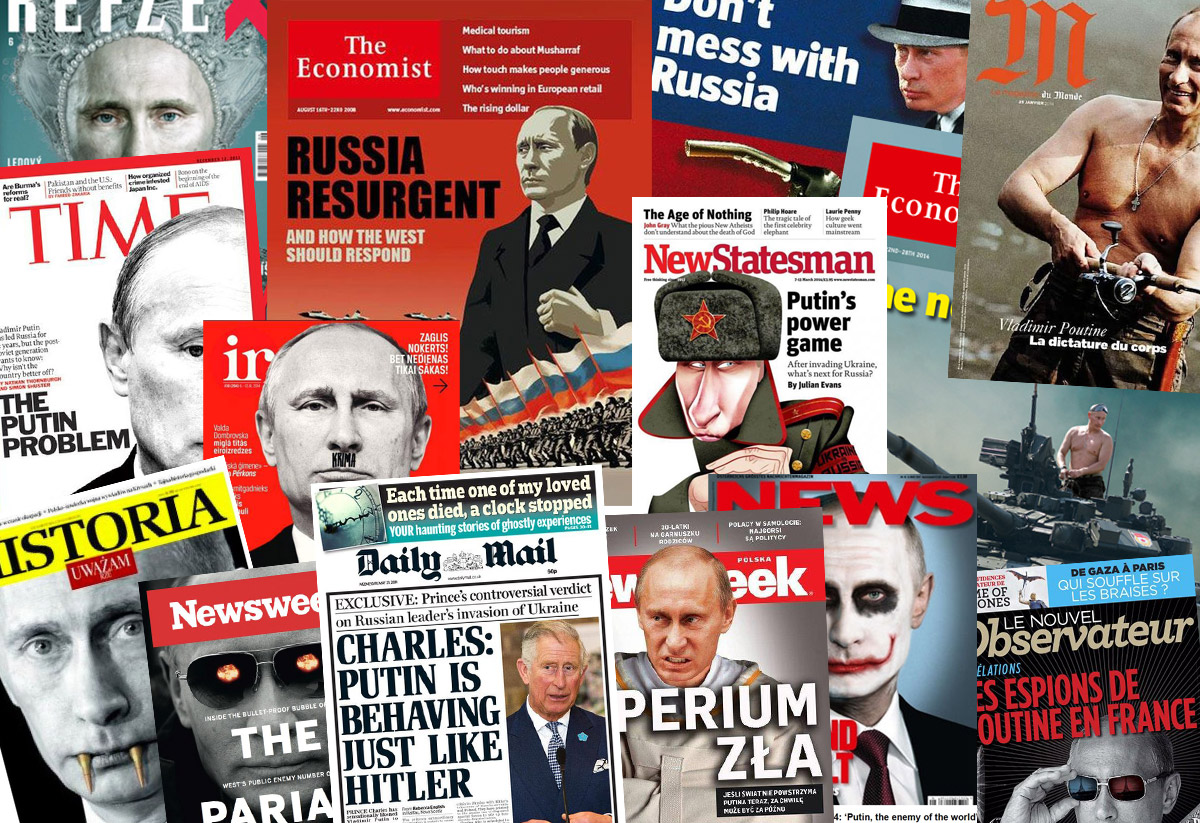 Not known to the Western people, though, about what is truly happening in the world today (as they’re constantly bombarded by anti-Russian propaganda on an hourly basis), is that it’s not “hacking” or “fake news” their elite rulers are in terror of—but a growing ancient Christian ideology that has overtaken all of Russia, including all of its church, political and military leaders, and President Putin too.

Known as The Fourth Political Theory that integrates and supersedes the three past “theories” of Liberal Democracy, Marxism, and Fascism, this ideology articulated by Russian political scientist Aleksandr Dugin is so feared by the West that he (Dugin) now lives under sanctions imposed on him by the United States.

And to fully understand the Western elite’s fears of Dugin and how his works have changed all of , one only need read his words describing the moral failure of the West: “Fundamental failure of globalist version of liberalism is now evident. Brexit, Trump's victory and then elsewhere. But in its place comes the simplest solution: a return to national State (Etat-Nation) and to various forms of nationalism. That means we return - mutatis mutant - to the beginning of the twentieth century.”

But to the solution of the West’s moral failures is what these elite’s have the greatest fear of, and as, again, Dugin articulates:

“We need to return to the Being, to the Logos, to the fundamental- ontology (of Heidegger), to the Sacred, to the New Middle Ages - and thus to the Empire, religion, and the institutions of traditional society (hierarchy, cult, domination of spirit over matter and so on).

All content of Modernity - is Satanism and degeneration. Nothing is worth, everything is to be cleansed off. The Modernity is absolutely wrong -- science, values, philosophy, art, society, modes, patterns, "truths", understanding of Being, time and space. All is dead with Modernity. So it should end. We are going to end it.” 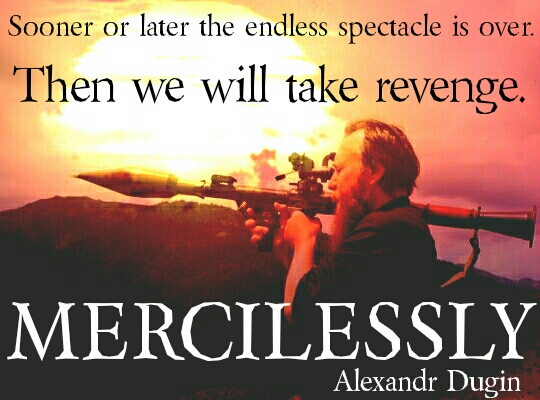 And when Dugin says “So it should end. We are going to end it.”; no one should be under any illusion as to what he means—and that is detailed in the book "The American Empire Should Be Destroyed": Alexander Dugin and the Perils of Immanentized Eschatology wherein he describes the “ancient fight between Hyperborea and Atlantis” our world is now in the final battle of.

With Dugin comparing Russia to the mythical people who lived “beyond the North Wind” called Hyperborea, and the West as being the fallen, and evil, lost continent of Atlantis, one need understand that Russia today is fully armed and prepared to not only defend itself against the West—but is, actually, preparing to destroy it as it sees no other option left before it’s destroyed by these satanic led nations too.

As the Western satanic elites face destruction, however, does see one glimmer of hope before this final Holy War begins, and as stated this past week by Dugin in the open letter he released in the Kremlin that says:

“The USA is the Far West of the world. It is the space of Midnight. And there the final point of the Fall is reached. The moment at hand is one of a change of poles.

The West turns into the East. Putin and Trump are in two opposite corners of the planet.

In the 20th century, these two extremes were embodied by the most radical forms of Modernity – capitalism and communism.

Two apocalyptical monsters – Leviathan and Behemoth. Now they have turned into two eschatological promises: Putin’s Greater Russia and America liberating itself under Trump.

The 21st century has finally begun.” But to Dugin and the Kremlins wish that “the 21st century has finally begun”, and in order to achieve this end to avert total global war, he, also, called for the “true world” to unite behind President Donald Trump in his moral war to “Drain the Swamp”:

“The Swamp” is to become the new name for the globalist sect, the open society adepts, LGBT maniacs, Soros’ army, the post-humanists, and so on.

Draining the Swamp is not only categorically imperative for America. It is a global challenge for all of us. Today, every people is under the rule of its own Swamp.

We, all together, should start the fight against the Russian Swamp, the French Swamp, the German Swamp, and so on. We need to purge our societies of the Swamp’s influence.

Instead of fighting between ourselves, let us drain it together. Swamp-drainers of the whole world unite!”

With President Trump, however, just 18 days from taking power and being able to destroy these “swamp monsters” forever, and in the future unite this world in peace with Tsar Putin, be warned that there is a reason that today, for the first time since World War II ended, not one single US aircraft carrier is deployed anywhere in the world—which makes perfect sense as these modern day “floating cities of war” only go where they are most critically needed, that in this case is all around the United States.

The only question being, whose side are they on? 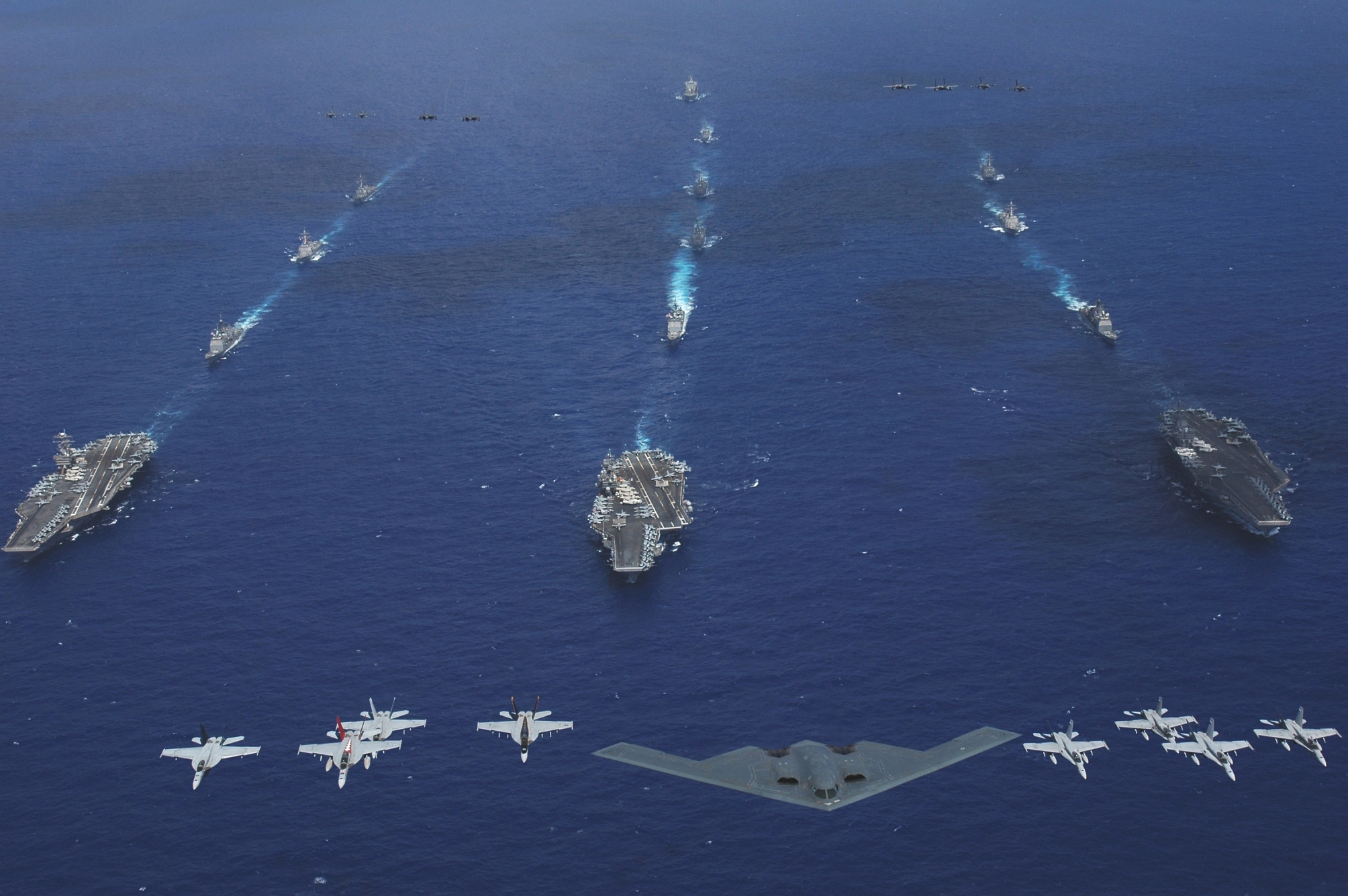 January 2, 2017 © EU and US all rights reserved.  Permission to use this report in its entirety is granted under the condition it is linked back to its original source at WhatDoesItMean.Com. Freebase content licensed under CC-BY and GFDL.