In what we can only surmise may be a “tongue-in-cheek” report issued by the Ministry of Foreign Affairs (MoFA) today, Russian diplomats are lauding Nobel Prize winning United States President Barack Obama for his development of what can only be described as a “miracle bomb” after the US State Department issued its year end report stating that these feared weapons of war were dropped by American aircraft 23,144 times in 2015 on the nations of Iraq, Syria, Afghanistan, Pakistan, Yemen and Somalia, and not only failed to stop the terrorist gains in these Islamic nations, but amazingly only killed 6 innocent civilians! 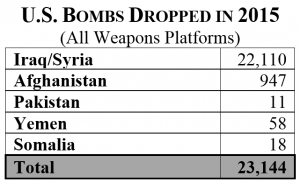 According to this report, the Western world may, indeed, be rushing to President Obama’s door to obtain for themselves these new “miracle bombs” that don’t kill anyone to distinguish themselves too, like the Americans, in their war fighting prowess—particularly against the barbaric Islamic State (ISIS/ISIL/Daesh) terrorists operating in the Levant War Zone that will allow these nations to claim that they are doing something when, in fact, they don’t have to do anything at all.

Being left out and not being allowed to either use or purchase President Obama’s “miracle bombs”, this report continues, are Federation Aerospace Forces who are being be left with only “old fashioned bombs” to use in their fight against these barbaric terrorists—and which in the past 10 days alone, 1,097 Islamic State terrorist targets in Syria have been struck thereby allowing Syrian Democratic Forces to continue their advance on the Islamic State’s capitol, Raqqa, and has allowed these forces to gain control over al-Salhiya, Rdzheman-Alaia, el-Qria and Hadriyat-Ayn-Isa too. 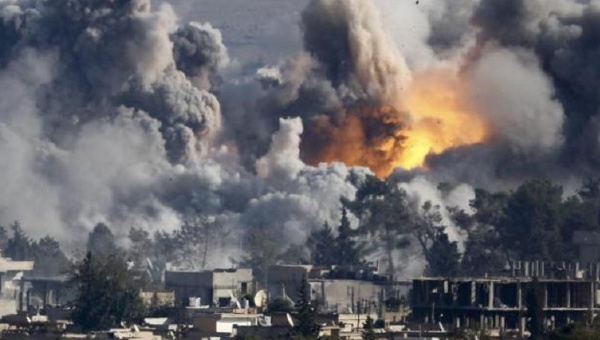 As to what President Obama has done with America’s “old fashioned bombs” now that he is now using their new “miracle” version, this report notes, is to give some of the worst of them to his Sunni Muslim ally Saudi Arabia that has begun using them against the Shiite Muslim civilian population of Yemen—which, most unfortunately, United Nation Secretary General Ban Ki-moon this past Friday (8 January) called a “grave war crime”. 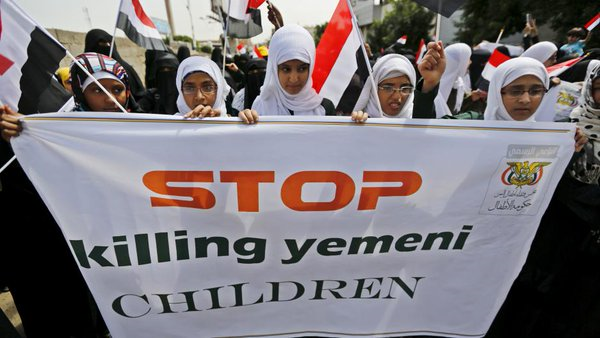 Equally as spectacular as President Obama’s new “miracle bomb” is, this report continues, his power to continue using it has now become virtually unlimited as the top Senator in , Mitch McConnell, yesterday stated that the US Congress would not authorize any war against Islamic State terrorists thus leaving President Obama to bomb whomever and wherever he wants to. 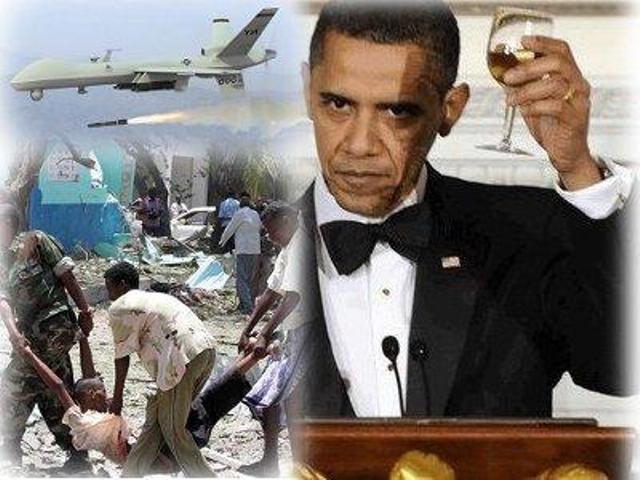 Because the Federation is still using “old fashioned bombs” to strike these terrorists though, this report states, the Western nations behind President Obama’s “miracle bomb” have, of course, begun attacking Russia for causing the starvation of children (it’s ALWAYS the children) in Syria for using them—which would be sad if it was true, but, and as explained today by the AntiWar.com website in their article titled Fake Images of Crisis in Syria’s Madaya Making the Rounds, was proved to be a deliberate manufactured lie:

“A flurry of new stories surrounding mass starvation in the besieged Syrian town of , once a popular resort destination, have included some shocking images of starving children, and reports of people surviving on grass and tree leaves.

Even the editors here at Antiwar.com were briefly taken in, posting a story from the normally dependable al-Jazeera which used photographic “evidence” which turned out to be recycled photos from previous incidents.

Al-Jazeera’s top image of a starving child in that story, for instance, is the same child from a YouTube video in Derna, Syria, way back in May, months before the Madaya siege even began.

His isn’t the only image falsely attributed to the current crisis, with el-Akhbar identifying many of the other most high-profile pictures as having previous origins, one as far back as a 2009 picture of a refugee arriving in Europe, and a photo of a starving infant “in Madaya” dating from early 2014, and the infant shown is trapped in the ISIS-occupied Palestinian refugee camp or Yarmouk.

The shocking nature of the images makes for great press, and many are trying to parlay that into a chance to condemn the Syrian government, their Russian allies, and Hezbollah. While there are crises all over and well-documented suffering that has produced millions of refugees, one would think there would not be a need to manufacture phony stories surrounding recycled pictures. For those looking to hype the crisis-du-jour, however, it seems that asking for real photos of the real situation is just too inconvenient, and it’s easier to just re-brand the first starving child you see.” 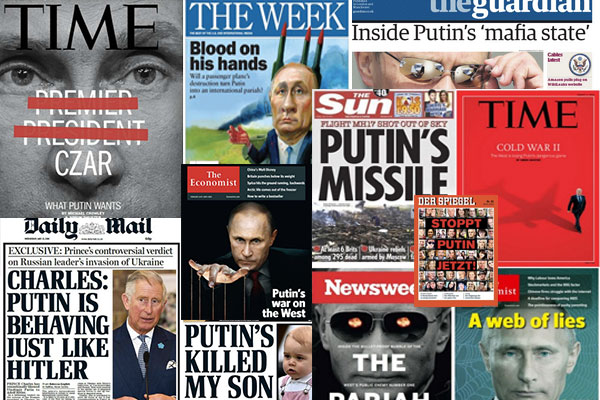 MoFA analysts contributing to this report note that this isn’t the first time either that the Western media has concocted lies about Russia—such as this past December when German state broadcaster ZDF hired unemployed actors to portray Russian soldiers in Ukraine:

“A German journalist called Dietmar came to see me as well as a film crew from Germany and said ‘let’s film a documentary about you’ saying that you went from Kaliningrad to Donetsk to fight for the separatists,” Lobyskin admitted. 'Dietmar' is ZDF political observer Dietmar Schumann, the Rossiya 1 report states.

“[Dietmar] said to me that they needed me to say that I was wounded, despite the fact that I have never be wounded. Firstly they took me to Moscow and then two hours later I was in Rostov."

Lobyskin was met at the airport by the German channel’s Russian speaking producer Valery Bobkov, who offered Yury 50,000 rubles (some $700 at current rate) to take part in the documentary. He was taken to the Donbass region where the conflict was taking place and instructed what to say.

“[Bobkov] trained me for three or four days. He told me exactly what to say and encouraged me to write things down.”

In order for President Obama to keep his “miracle bomb” secret from the American people too, this report points out, his mainstream media “presstitutes” have even begun showing film of Aerospace Forces airstrikes against Islamic State terrorists while stating, falsely, that US planes were the ones doing this:

“PBS NewsHour, a daily US television news program shown on the US Public Broadcasting Service (PBS), used footage of Russian airstrikes against ISIL targets, claiming that they were US airstrikes, an Information Clearing House article revealed.

“For the first time the US is attacking oil delivery trucks," the voice-over said between 2:30 — 2:35, while showing a clip of exactly the same video published by the Russian Defense Ministry the day before.” 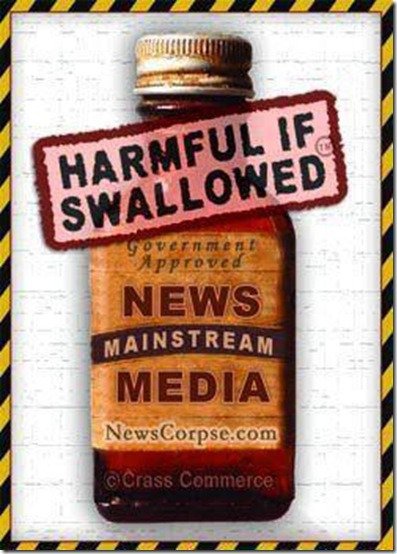 As to which nations will benefit from having President Obama’s new “miracle bomb” dropped on them in 2016, this report concludes, isn’t at this time known—but will, most certainly, create extreme joy in the Western world as no more innocent civilians will ever have to die from them again, or if they are it can just all be blamed on Russia. 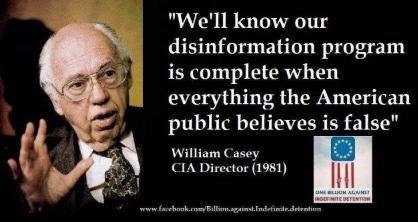 January 11, 2016 © EU and US all rights reserved.  Permission to use this report in its entirety is granted under the condition it is linked back to its original source at WhatDoesItMean.Com. Freebase content licensed under CC-BY and GFDL.