“If all that Americans want is security, they can go to prison. They'll have enough to eat, a bed and a roof over their heads. But if an American wants to preserve his dignity and his equality as a human being, he must not bow his neck to any dictatorial government.”

Barely 5 years removed from the horrors of the greatest war (World War II) our planet had ever experienced, on 8 December 1949, the last true General-Statesman of the United States, Dwight D. Eisenhower, spoke before a gathering of his citizens in , and said these words: “If all that Americans want is security, they can go to prison. They'll have enough to eat, a bed and a roof over their heads. But if an American wants to preserve his dignity and his equality as a human being, he must not bow his neck to any dictatorial government.”

Three years later, in 1952, Eisenhower became President of the United States and led his nation to what has become known as one of the greatest, and peaceful, economic expansions in world history—which not only benefited his own nation, but raised from the ruins a war devastated Europe and Asia.

The forces Eisenhower battled against to achieve this “modern miracle” in international and domestic affairs, though, he failed to completely defeat, thus leading to his warning to the American people on his last day in office, 1961, in what is now famously known as the “Military-Industrial Complex Speech”:

“Until the latest of our world conflicts, the had no armaments industry. American makers of plowshares could, with time and as required, make swords as well. But now we can no longer risk emergency improvisation of national defense; we have been compelled to create a permanent armaments industry of vast proportions.

Added to this, three and a half million men and women are directly engaged in the defense establishment. We annually spend on military security more than the net income of all corporations.

This conjunction of an immense military establishment and a large arms industry is new in the American experience. The total influence -- economic, political, even spiritual -- is felt in every city, every State house, every office of the Federal government. We recognize the imperative need for this development.

Yet we must not fail to comprehend its grave implications. Our toil, resources and livelihood are all involved; so is the very structure of our society.

In the councils of government, we must guard against the acquisition of unwarranted influence, whether sought or unsought, by the military-industrial complex. The potential for the disastrous rise of misplaced power exists and will persist.

We must never let the weight of this combination endanger our liberties or democratic processes. We should take nothing for granted. Only an alert and knowledgeable citizenry can compel the proper meshing of the huge industrial and military machinery of defense with our peaceful methods and goals, so that security and liberty may prosper together.”

Though many of you may, no doubt, be familiar with this warning given by Eisenhower, his most critical warning about the future was revealed later in this speech:

“Today, the solitary inventor, tinkering in his shop, has been overshadowed by task forces of scientists in laboratories and testing fields. In the same fashion, the free university, historically the fountainhead of free ideas and scientific discovery, has experienced a revolution in the conduct of research.

Partly because of the huge costs involved, a government contract becomes virtually a substitute for intellectual curiosity. For every old blackboard there are now hundreds of new electronic computers.

The prospect of domination of the nation's scholars by Federal employment, project allocations, and the power of money is ever present...and is gravely to be regarded.”

Why Eisenhower gave this “grave” warning to the American people was based upon the knowledge he gained in the aftermath of World War II that showed to him the dangers caused to the whole world by the combination of Nazi Germany’s melding of “government-science-education-corporations” into a seamless single entity—and which without the computing power provided to this regime by IBM would not have been possible.

And so powerful had computers become in Eisenhower’s time during his presidency, that by the mid-1960’s, IBM’s 1400 series computers (which would fill a modern day living room) comprised over half the computers used in the entire world…but which today the average cell phone has over 1,000 times more computing power the 1400 series ever did.

Also to note, a contemporary of Eisenhower noting these dangers too was the English journalist/novelist George Orwell—who, because of his wife’s, Eileen, service during World War II in the British governments Censorship Department of the Ministry of Information, became so alarmed at what the future held for humanity, in 1949, he wrote what is, perhaps, the greatest dystopian novel ever written, 1984.

In Orwell’s extrapolation of current events into the future he surmised in his book, 1984, what the future of governments would become:

“Now I will tell you the answer to my question. It is this. The Party seeks power entirely for its own sake. We are not interested in the good of others; we are interested solely in power, pure power.

What pure power means you will understand presently.  We are different from the oligarchies of the past in that we know what we are doing. All the others, even those who resembled ourselves, were cowards and hypocrites.

The German Nazis and the Russian Communists came very close to us in their methods, but they never had the courage to recognize their own motives. They pretended, perhaps they even believed, that they had seized power unwillingly and for a limited time, and that just around the corner there lay a paradise where human beings would be free and equal.

We are not like that. We know that no one ever seizes power with the intention of relinquishing it. Power is not a means; it is an end. One does not establish a dictatorship in order to safeguard a revolution; one makes the revolution in order to establish the dictatorship.

And as to what life would like for the peoples living in world like this Orwell simple stated: “If you want a picture of the future, imagine a boot stamping on a human face—for ever.”

As to full horrors both Eisenhower and Orwell warned about, all of us today can see for ourselves as it unfolds around us—and nowhere on Earth has this become more scary than in China, where the melding of “government-science-education-corporations” into a seamless single entity has become so complete, that in just 5 short years, 2020, here is what their nation will become:

Quickly following China into this dystopian world is the United States—where just this past week, the US Congress slipped into a massive spending bill a new law called the Cybersecurity Information Sharing Act, or CISA, that for the first time in that nation’s history allows federal agencies – including the NSA – to share cybersecurity, and really any information, with private corporations—and which once this massive database is complete, the total enslavement of America will be complete.

And to Orwell’s warning of how this will be accomplished (“He who controls the past controls the future. He who controls the present controls the past.”) the New York Times (America’s paper of record) put on full display this week when they erased from history this phrase devastating Obama admission from one of their main articles: “In his meeting with the columnists, Mr. Obama indicated that he did not see enough cable television to fully appreciate the anxiety after the attacks in Paris and San Bernardino, and made clear that he plans to step up his public arguments. Republicans were telling Americans that he is not doing anything when he is doing a lot, he said.” 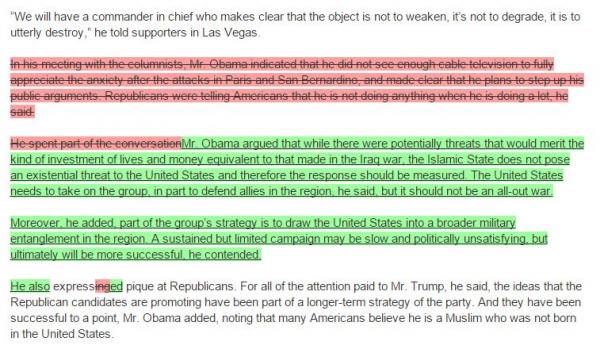 At the exact same time that the New York Times was self-censoring itself to protect its elite leader, it also failed, as well as the rest of the “mainstream” American media, to keep their readers from knowing of some of the most critical world developments now occurring—that include:

Obama ordering all US warplanes out of Syrian skies

The Pentagon ordering the immediate removal from Turkey of the F-15 fighter jets that the had just stationed there and which posed a threat to .

US Secretary of State John Kerry announcing that the US would no longer be seeking regime change in Syria—which just 4 weeks ago President Obama vowed he would never allow happen.

US Vice President Joseph Biden ordering Turkey to immediately remove its invading troops from Iraq—which just 6 days ago the State Department refused to even acknowledge happened.

President Obama ordering Turkey to remove its troops from Iraq too.

For the first time in the United Nations 70-year history, a summit of global finance ministers led by Russia and the US met in the Security Council and passed a resolution to attack the finances, and financial backers of the Islamic State.

Turkey blasting the US, Russia, and everyone else in the world, vowing they won’t abide by the UN resolution against the Islamic State nor remove its invading troops from Iraq.

Unlike the New York Times, and the rest of the “mainstream” US-EU media, we have told you the truth about these things, and too many other true facts to count too—after all, we really believe you have the right to know what is happening, especially before the “real war” starts and the global economy (as planned) collapses.

The word context is described as: the circumstances that form the setting for an event, statement, or idea, and in terms of which it can be fully understood and assessed—and which without, as the “mainstream” media well knows, causes people to float upon an incessant sea of facts without ever knowing what the destination is.

We, on the other hand, not only know what the destination is, we feel it is our obligation to let you know too.

(Please note that those who respond to this appeal, in any amount, will receive, at no charge, Sorcha Faal’s  December, 2015/January, 2016 lecture series to the Sisters of the Order titled “Total War: the Collapse of the United States and the Rise of Chaos: Part 47”.  This is another one of the Sorcha Faal’s most important lectures dealing with the coming timelines of war, famine, catastrophic Earth changes and disease as predicted by ancient prophecies.)