In what can only be described as one of the most frightening and chilling Ministry of Defense (MoD) reports we’ve ever been permitted (in part) to review, Russian military-intelligence analysts are warning today that Turkish President Recep Tayyip Erdogan is traveling to Saudi Arabia to declare himself before that regime as the “leader” of the entire Islamic world and has, also, stated his intention of igniting World War III between NATO and Russia so that these “apostate powers” will destroy themselves thus enabling Muslims, under his “leadership”, to establish a global caliphate. 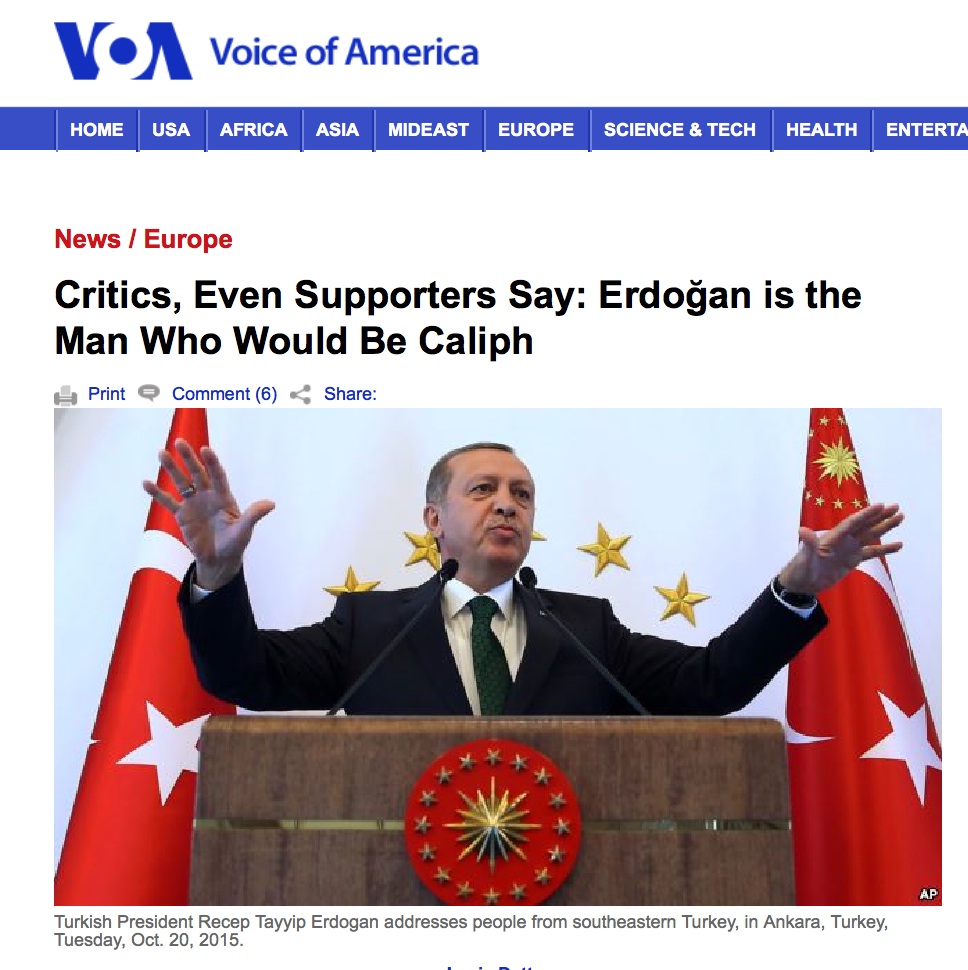 According to this report, President Erdogan is asserting his right to “leadership” over the entire Islamic world based upon a fatwa (Islamic legal/religious ruling) issued this past week by his main “spiritual/religious/legal” teacher Hayrettin Karaman—who, in essence, announces in his Presidential System fatwa that Erdogan’s plan to impose on Turkey an entirely new constitution is justified as it will give to Erdogan the supreme power he needs to bypass democratic laws, become an emir and establish his caliphate.

With many Muslims in the world already calling Erdogan a “god”, this report continues, it is, also, critical to remember that his “main teacher” Hayrettin Karaman, who issued this fatwa, had previously, in 2009, been caught on a secret recording issuing another fatwa directly to Erdogan authorizing Turkey’s National Intelligence Organization (MIT) to assassinate Turkish politician Muhsin Yazicioglu—and which in giving his reason to Erdogan as to why he was allowing this murder simply stated  “slaughter is obligatory”. 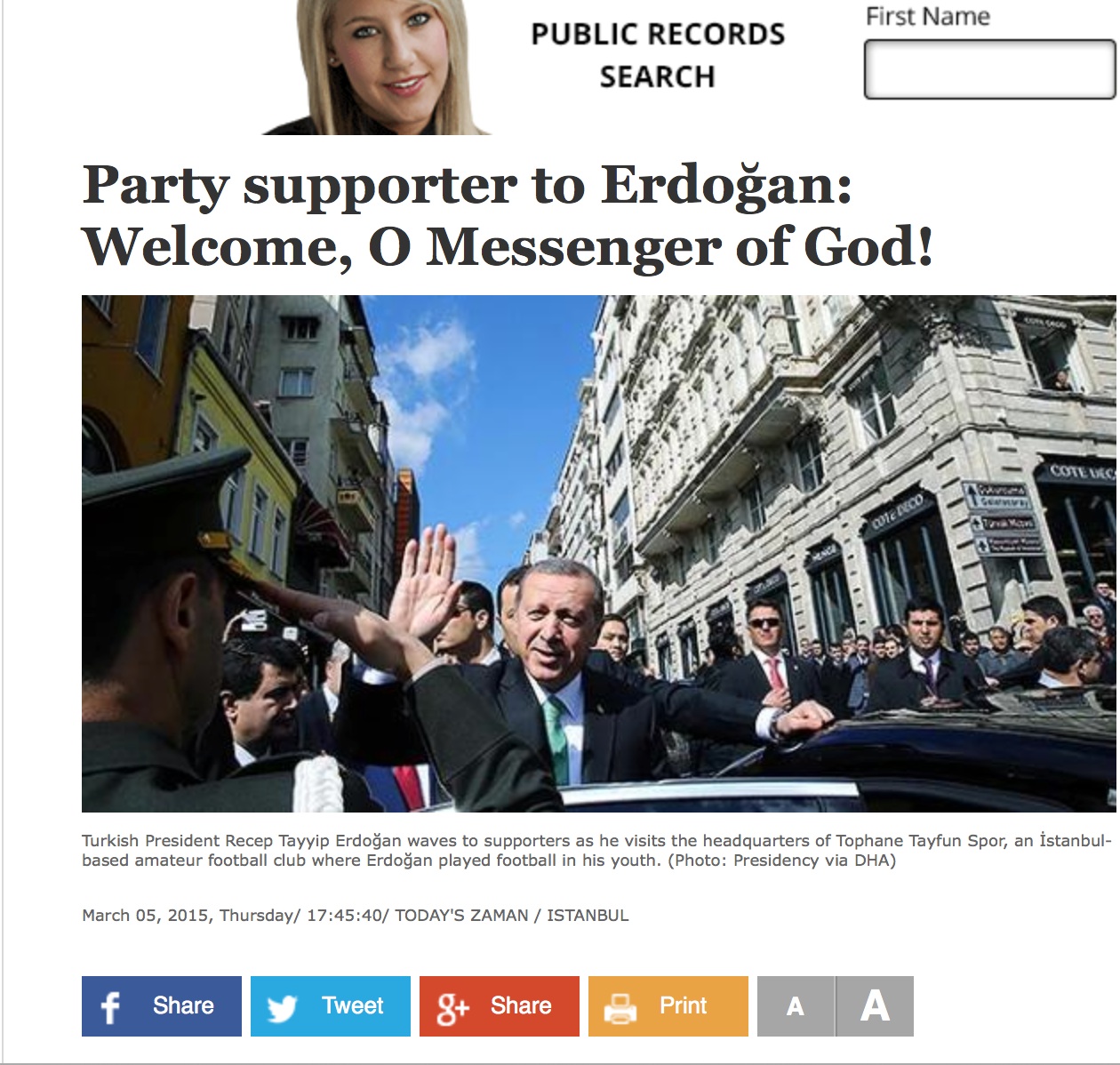 Interesting to note too, this report says, is that the West is now becoming gravely worried about Erdogan too, and as evidenced by the Wall Street Journal yesterday warning that Turkey has gone from being viewed by Western government officials, media and academics as an influential, moderating force for regional stability and economic growth, to a tacit supporter, if not outright sponsor, of international terrorism and is now viewed as a dangerous ally that risks plunging NATO into an unwanted conflict with Russia.

Speaking last year of the porous Turkey-Syria border too, this report further notes, US Vice President Joseph Biden let slip, in a moment of rare candor, that the biggest problem America was facing in confronting Islamic State terrorists was its own NATO ally Turkey—a true admission he was forced by President Obama to apologize for. 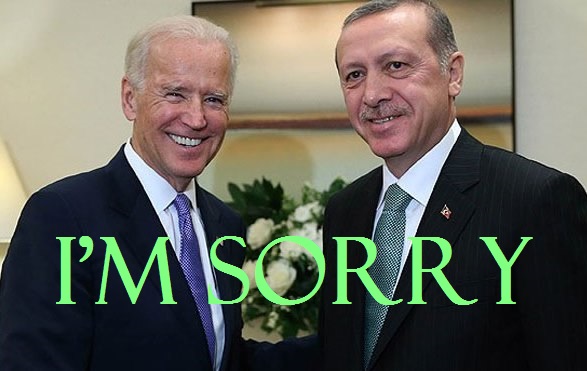 And even though the Obama regime keeps turning its face to hide from itself the crimes of Erdogan, this report warns, it may no longer be able to do so after US military supported Syrian Democratic Forces (a rebel alliance that includes the powerful YPG Kurdish militia comprising women troops and Arab rebel groups) this past weekend wrested control of the strategic Tishreen Dam from Islamic State terrorists on the Euphrates River—an action of victory against these terrorists that, nevertheless, prompted Turkish Prime Minister Ahmet Davutoglu a few hours ago to issue a warning to the Obama regime stating that “Turkey is closely following the situation in northern Syria's Tishrin area, and will not let any hostile groups cross west of Euphrates.”

has long opposed advances by the American backed Syrian Kurdish forces, this report explains, for fear this will lead to the creation of a Kurdish state on its border which in turn might encourage its own Kurdish minority, and which Erdogan views as the main threat to Turkey, not the Islamic State. 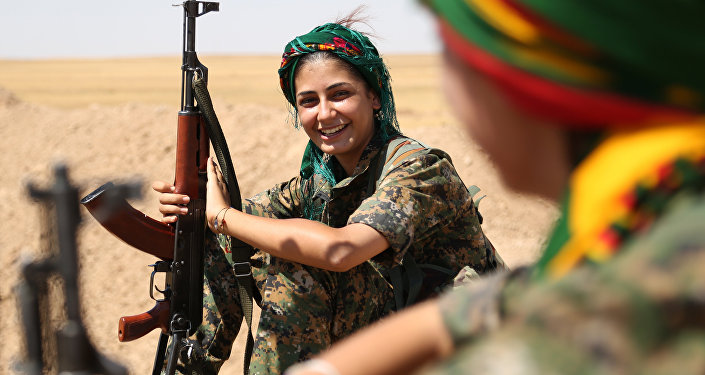 Erdogan’s hatred of too, this report continues, is due to their leader Assad being a “symbolic target” because he is secular, Alawite and tolerant of Christians and other groups — and is in the way of Erdogan's imperial vision ( was a part of the ).

Erdogan's imperial vision however, this report notes, has clashed with (Orthodox Christian) Russia's conservative reflexes—which President Putin understands the implications of the disruption of the regional balance entailed in Erdogan's megalomaniac vision.

To what the Obama regime truly understands, though, this report questions, is “beyond understanding” in any rational terms as at the same Turkish airfield that US Air Force planes take off daily into Syria to help the Kurds fight Islamic State terrorists, Turkish Air Force planes take off to bomb the same Kurds the US is helping too—and, absolutely astonishingly, the Obama regimes State Department, just yesterday, proclaimed as one of its “2015 Wins”  was its “bringing peace to Syria”.

And even though Erdogan in his initial attempt to start World War III in “peaceful Syria” when he deliberately ordered his NATO aligned military forces to shoot down a defenseless Russian bomber over that nation, this report concludes, how the “totally insane” Obama regime will react to the next deliberate provocation by Erdogan is anyone’s guess—but which Russia will, undoubtedly, be forced to respond to this time with massive military force. 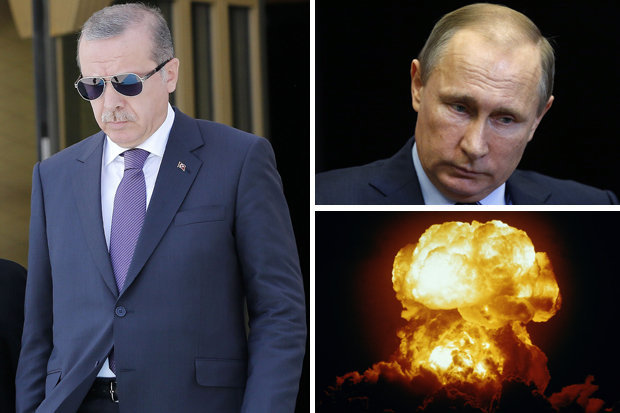 December 29, 2015 © EU and US all rights reserved.  Permission to use this report in its entirety is granted under the condition it is linked back to its original source at WhatDoesItMean.Com. Freebase content licensed under CC-BY and GFDL.