In the aftermath of yet another horrific mass shooting in , today it sees the familiar dividing line emerging between socialist calls for gun confiscation and conservative calls for a serious examination to be made of why young teenage males have become so mentally ill they feel nothing when taking the lives of innocents.

I find it more than interesting that the day prior to this latest mass shooting, the Wall Street Journal published its gobsmacking article “The Progressive Pronoun Police Come For Middle Schoolers”, wherein it revealed: “A Wisconsin school district opened a Title IX sexual-harassment investigation against 8th graders for calling a student ‘her’ instead of ‘them’...This can’t be real...Alas, it is”.

Among the students of history knowing exactly what is happening in America is Russian President Vladimir Putin, who factually observed: “Parent number one' and 'parent number two': 'birth parent' instead of 'mother', banning the use of the phrase 'breast milk' and replacing it with 'human milk' so that people who are insecure about their gender will not be upset...This is nothing new...In the 1920s the Soviet so-called kulturträgers also invented the so-called ‘newspeak’, proposing that in this way they could create a new consciousness and change society's values”.

The Soviet kulturträgers that devised new socialist tactics to transmit morally corrupt cultural ideals were studied in detail by American theorist Edward Bernays, a pioneer in the field of public relations and propaganda called “the father of public relations”, and was named one of the 100 most influential Americans of the 20th Century.

Why you should know this history is because of what happened in America last century, which was when President Woodrow Wilson vowed to keep his country out of World War I and told his citizens, who overwhelmingly didn’t want to get involved in a European conflict: “The United States must be neutral in fact as well as in name during these days that are to try men’s souls…We must be impartial in thought as well as in action, must put a curb upon our sentiments as well as upon every transaction that might be construed as a preference of one party to the struggle before another”.

In spite of President Wilson’s vow, however, Bernays was one of the men responsible for “selling” World War 1 to the American public by branding it as a war that was necessary to “make the world safe for democracy”—a fact of hidden history documented in the recently published article “The Psychology Of Manipulation: 6 Lessons From The Master Of Propaganda”, wherein it further notes: “According to Bernays, those doing the governing constitute an invisible ruling class that understand the mental processes and social patterns of the masses”.

For those of us knowing how completely the American people are controlled and manipulated by the invisible forces they have no knowledge of, we began to notice a troubling change during the first President Barack Obama administration, where the socialist propaganda tactics devised by Bernays were joined with a massive campaign of outright lying—not just any lies, but lies so outlandish and provably wrong one can’t imagine anyone believing them.

One of the latest examples of outright lying causing vicious socialist and leftist media attacks against the so-called “Don’t Say Gay” bill passed by Florida, that doesn’t even mention the word gay, and simply mandated that teachers not discuss private body parts with little children—and another outright lie example was against a new voter law passed by Georgia, that President Biden called “Jim Crow 2.0” because he said it would suppress Black votes, but whose truth about has just been reported: “Record turnout in the Georgia primary destroys left's lies about 'voter suppression'...Georgia voters shattered records in the state's Tuesday primary and left's claims about voter suppression were debunked”.

As to what caused this massive campaign of outright lying was the November-2009 publication of the psychological working paper “Bayesian Persuasion”, whose abstract states: “When is it possible for one person to persuade another to change her action?...We take a mechanism design approach to this question…Taking preferences and initial beliefs as given, we introduce the notion of a persuasion mechanism: a game between Sender and Receiver defined by an information structure and a message technology…We derive necessary and sufficient conditions for the existence of a persuasion mechanism that strictly benefits Sender…We characterize the optimal mechanism…Finally, we analyze several examples that illustrate the applicability of our results”.

What this “game between Sender and Receiver” psychological document proves is that the “Sender” of information has more power than the “Receiver” even when outright lies are told—a fact known to the leftist New York Times, who, in their just published article “How To Get People To Do What You Want Them To Do”, notes that truth doesn’t matter anymore, and states: “The goal for the sender is to share the information that will most effectively persuade the receiver to act in a certain way”.

Why you really need to know about this is because of scientific papers like “Bayesian Persuasion for Algorithmic Recourse”, wherein it states: “When subjected to automated decision-making, decision subjects may strategically modify their observable features in ways they believe will maximize their chances of receiving a favorable decision…In many practical situations, the underlying assessment rule is deliberately kept secret to avoid gaming and maintain competitive advantage…The resulting opacity forces the decision subjects to rely on incomplete information when making strategic feature modifications…We capture such settings as a game of Bayesian persuasion, in which the decision maker offers a form of recourse to the decision subject by providing them with an action recommendation (or signal) to incentivize them to modify their features in desirable ways”—which means that a world is being created wherein decision makers no longer rely on facts and truth, that brings to mind the old GIGO adage “Garbage In-Garbage Out”. 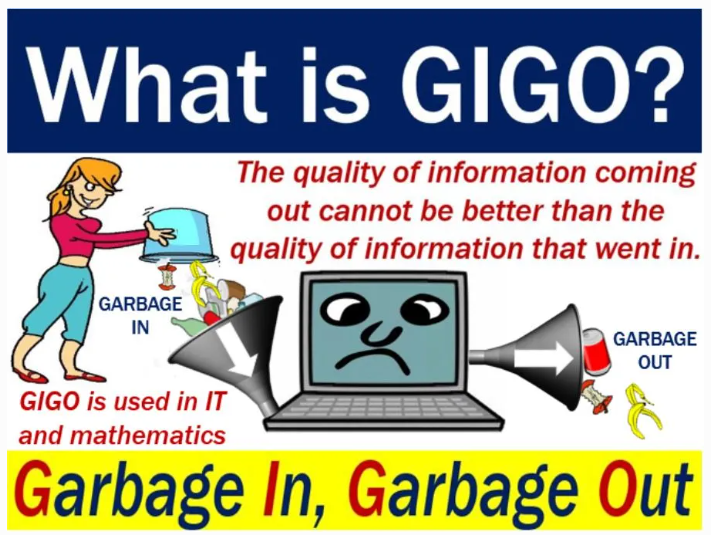 The end result of the GIGO world you’re living in, where the lying “Sender” has more power than the socialist indoctrinated “Receiver”, is what you see in America today, where every issue becomes an intractable crisis not needing to be solved, but manipulated for economic and political gain.

The sworn enemies of the GIGO world and its invisible manipulators are truth and facts, which is why they are waging an all-out war against those like the Dear Sisters telling you true things.

You live in this GIGO world and are suffering its catastrophic effects every day, but before things get worse, you should really start supporting those fighting behind and on the front lines of this war on your behalf.

For the past 20-years, the Dear Sisters have explained that their mission of truth is to keep this war from ending up on your very doorstep—but how much closer does it need to come before you awaken and realize it’s headed straight for you?

Those of you who read Sister Ciara’s special report “A Strange Day Is Coming To America” know how close this war really is—and if you’re tired of being lied to and manipulated, then please help the Dear Sisters continue their mission by going below and giving what you can today.