A Strange Day Is Coming To

“Globalization is nothing more than a globally deployed model of Western European, or, rather, Anglo-Saxon ethnocentrism, which is the purest manifestation of racist ideology.”

Aleksandr Dugin (born 7 January 1962) Russian political philosopher, analyst, and strategist considered by some in the West to be “Putin's brain”, or “Putin's philosopher”.

During the World Economic Forum annual meeting in Davos-Switzerland yesterday, where Western political and business elites gather to plot and discuss their globalization goals, American financial giant MasterCard CEO Michael Miebach had people openly gasping when he answered “no” when asked if SWIFT, the current interbank messaging system that allows for cross-border payments, will exist in five years time—is a SWIFT global banking system comprised of more than 11,000 financial institutions across more than 200 countries and territories, but when ceasing to exist, the West will lose all control over the rest of the world.

Also speaking at the World Economic Forum was Western globalist architect George Soros, who, according to the United States Congressional Record dated 28 November 2006, described his economic ideology as: “I am basically there to make money…I cannot and do not look at the social consequences of what I do”—when asked about the part he played in confiscating the property of Jewish peoples for the Nazi Germans in World War II he replied: “There was no sense that I shouldn't be there, because that was, well, actually, in a funny way, it's just like in markets...That if I weren't there, of course, I wasn't doing it, but somebody else would be taking it away”—and yesterday in Davos, he warned: “Russia invaded Ukraine…This has shaken Europe to its core...The Russian invasion may turn out to be the beginning of World War III, and our civilization may not survive it”.

Most critically important for you to know about the warning Soros issued was his statement of fact fully known to other Western elites, like MasterCard CEO Michael Miebach, and saw him revealing: “The invasion of Ukraine didn’t come out of the blue…The world has been increasingly engaged in a struggle between two systems of governance that are diametrically opposed to each other: open society and closed society...Repressive regimes are now in the ascendant and open societies are under siege...Today China and Russia present the greatest threat to open society...The best and perhaps only way to preserve our civilisation is to defeat Putin as soon as possible…That’s the bottom line”. 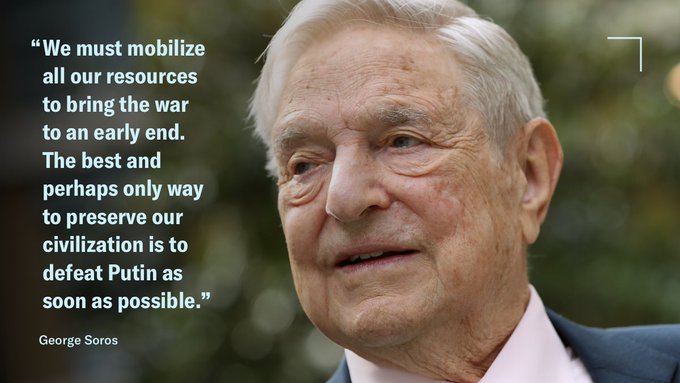 Very soon, and much sooner than you might think, a strange day is coming to America when its citizens awaken to the truth known by Western globalist elites, specifically that the war in Ukraine was foretold about in the Russian government guiding document “The Great War of the Continents” written by Alexander Dugin—most rightly described as “Putin’s brain” and the Washington Post described as “The far-right mystical writer who helped shape Putin’s view of Russia...Alexander Dugin sees the Ukraine war as part of a wider, spiritual battle between traditional order and progressive chaos”—wherein he shreds the conspiracy concept of a “Judeo-Masonic” global ruling elite while laying bare the “struggle between two systems of governance that are diametrically opposed to each other” warned about by Soros yesterday.

This massive document guiding the Russian government and its peoples is much too long to fully present here, but most important for you to know about right now is how they see the world and what they are preparing to fight to the death for, and as it so states:

The confrontation between the Order of Atlantis and the Order of Eurasia, stretching across centuries and millennia, has been veiled in the most different forms and is in some sense the main conspirological content of history, the history of great planetary passions, the history of peoples and religions, races, and traditions, spirit and flesh, war and peace.

Atlanticism embodies the primacy of individualism, “economic liberalism” and “democracy of the Protestant type,” and opposes Eurasianism which presupposes authoritarianism, hierarchy, and the posing of community-based, nation-state principles against small human, individualist, hedonistic, and economic interests.

The Eurasian orientation in character is primarily pronounced in Russia and Germany, the two most powerful continental powers whose geopolitical, economic, and, most importantly, deep ideological interests are fully opposed to the interests of England and the USA, that is, the Atlanticists.

The German word Endkampf (“final battle,” “battle of the end”) wonderfully expresses the essence of the contemporary planetary situation.

Eschatological motives, motives of the End Times, penetrate not only religious and mystical movements but also immediate politics, economics, and everyday life.

But we must not fall into archaism by protecting some obsolete cultural, social or political forms. We should not be conservatives by inertia.

The Order of Eurasia is the complete Conservative Revolution, the Great Revival of geopolitical consciousness, the path of the Vertical, and not the path of slithering oscillations to the left or right or attempts to stagger backwards.

We must throw the servants of the Ocean into the ocean.  We must send agents of the “Island” back to their “”.

We should rip those who have betrayed “ours”, betrayed our ideals and our interests, out of the political, cultural, and national flesh of the Continent.

Yes, our enemies have their own truth.  Yes, we should respect their deep metaphysical choice and we should look closely into their Secret, the secret of the “Wells of the West”.

But in doing so we should not lose our resoluteness, our rage, our cold and passionate Cruelty.

We will be forgiving only when our Continent will be free, when the last Atlanticist will be thrown into the Salt Walter, into this symbolic element belonging to the Egyptian god with the face of the Crocodile.

Judging by certain signs, “the Time is at hand”.

The Endkampf, the Final , should burst here and now.

The decisive Hour of is already near…

The final point of the GREAT WAR OF CONTINENTS is already nearing. 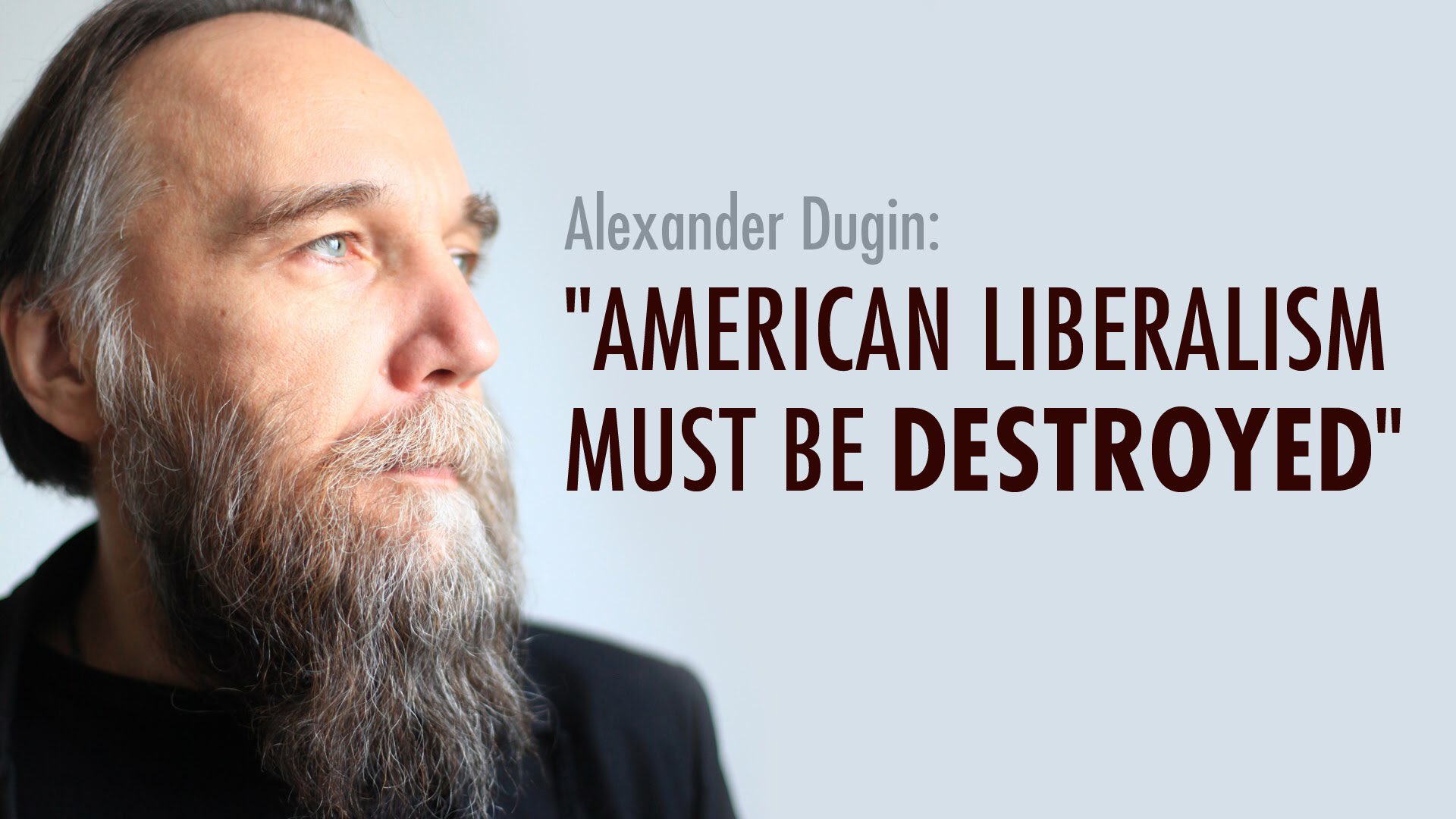 Among those knowing the truth that the “confrontation between the Order of Atlantis and the Order of Eurasia stretched across centuries and millennia” were the Founding Fathers of America, who created a nation and government to keep itself out of the inevitable “final battle” between these two opposing civilizations—by 1836, however, it saw Vice President John Calhoun warning: “A power has risen up in the government greater than the people themselves, consisting of many and various powerful interests, combined in one mass”—in 1908 it saw President Theodore Roosevelt warning: “Behind the ostensible government sits enthroned an invisible government owing no allegiance and acknowledging no responsibility to the people”—in 1913 it saw President Woodrow Wilson warning: “Since I entered politics, I have chiefly had men’s views confided to me privately…Some of the biggest men in the United States, in the field of commerce and manufacture, are afraid of something…They know that there is a power somewhere so organized, so subtle, so watchful, so interlocked, so complete, so pervasive, that they had better not speak above their breath when they speak in condemnation of it”—in 1933 it saw President Franklin Roosevelt warning: “Today the path to total dictatorship in the U.S. can be laid by strictly legal means… We have a well-organized political-action group in this country, determined to destroy our Constitution and establish a one-party state… It operates secretly, silently, continuously to transform our Government… This ruthless power-seeking elite is a disease of our century… This group is answerable neither to the President, the Congress, nor the courts…It is practically irremovable”—and in 1956 it saw FBI Director J. Edgar Hoover fearfully writing: “The individual is handicapped by coming face-to-face with a conspiracy so monstrous he cannot believe it exists…The American mind simply has not come to a realization of the evil which has been introduced into our midst…It rejects even the assumption that human creatures could espouse a philosophy which must ultimately destroy all that is good and decent”. 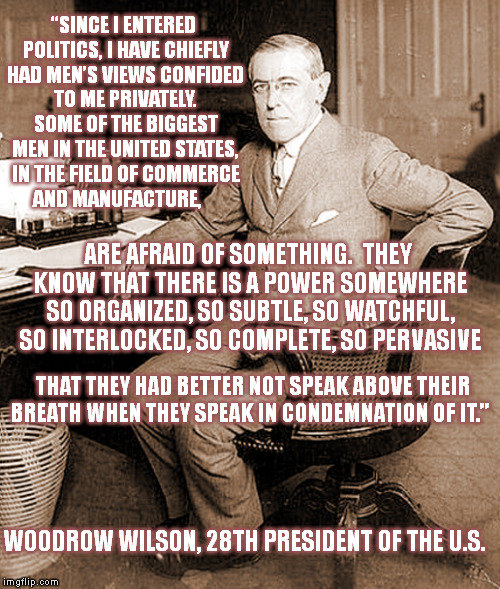 When FBI Director Hoover wrote the warning words “The American mind simply has not come to a realization of the evil which has been introduced into our midst”, he did so knowing that these people were being indoctrinated by a leftist-socialist media establishment controlled by the “power somewhere so organized, so subtle, so watchful, so interlocked, so complete, so pervasive, that they had better not speak above their breath when they speak in condemnation of it” warned about by President Wilson—whose legacy today is best exampled best exampled by this media establishment ignoring the bombshell news just revealed about how Hillary Clinton masterminded the Russiagate hoax against President Donald Trump and the “Typhoid Mary of Disinformation” leftist MSNBC news host Nicole Wallace. 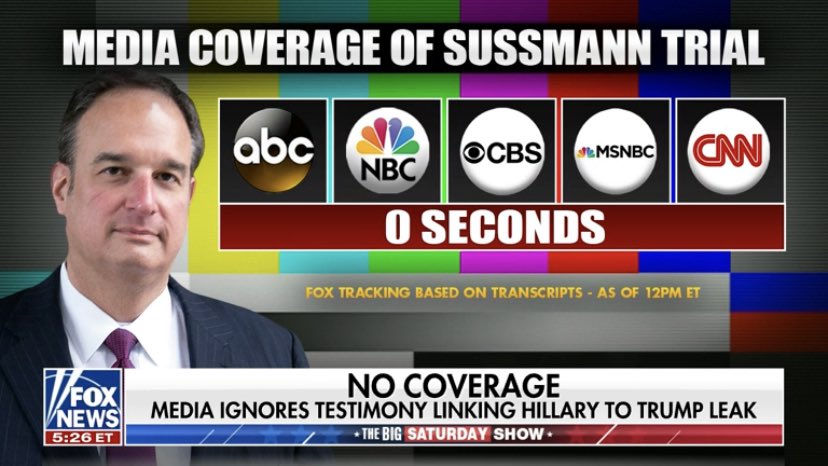 Unlike when FBI Director Hoover wrote his warning words over 65-years ago, however, my Dear Sisters, and many like them, have awakened Americans to “the evil which has been introduced into our midst”, which is why these “hidden powers” have waged an unceasing war to cancel, demonetize and ban everyone daring to tell the truth.

YOU are our only defense against these “hidden powers” seeking to extinguish the truth, and if you fail to support us, or others like us, it is siding with “evil”—a fact you don’t want to hear, but is the honest truth—if you believe you’re better served by listening to those like the “Typhoid Mary of Disinformation” and the mainstream leftist media that refuse to cover true things you’ve chosen your side—but if you know the truth about the “evil in our midst”, please help us stop it by going below and giving what you can today before it’s too late.

(Please note that those who respond to this appeal, in any amount, will receive, at no charge, Sorcha Faal’s May, 2022/June, 2022 lecture series to the Sisters of the Order titled “Total War: the Collapse of the United States and the Rise of Chaos: Part 122”.  This is another one of the Sorcha Faal’s most important lectures dealing with the coming timelines of war, famine, catastrophic Earth changes and disease as predicted by ancient prophecies.)