Last Friday, 23 November, a report titled the “Fourth National Climate Assessment” was released in the United States—that was put together with the help of 1,000 people, including 300 leading scientists, roughly half from outside the US government—and whose main conclusion was that “thousands more could die, food will be scarcer, and the US economy could lose hundreds of billions of dollars -- or, in the worst-case scenario, more than 10% of its GDP -- by the end of the century”.

Apparently, one of the only American leaders left having a sane mind is President Donald Trump, who in commenting on this climate change report simply said “I don’t believe it”—but who new polling shows isn’t being supported in his views as 64% of the people in his own Republican Party say they believe that Earth's climate is changing, up from 49% in 2015, and who join 92% of Democrats and 78% of independents who have bought tickets on this “Train Ride To Insanity”, too.

It’s important for you all to remember that this climate change/global warming hysteria began 48 year ago in the United States on 22 April 1970—the first “Earth Day”—and whose dire predictions are worth all our remembering, such as:

The day after the first Earth Day, the New York Times editorial page warned, “Man must stop pollution and conserve his resources, not merely to enhance existence but to save the race from intolerable deterioration and possible extinction.”

Harvard biologist George Wald estimated that “civilization will end by 1985 or 2000 unless immediate action is taken against problems facing mankind.”

“Population will inevitably and completely outstrip whatever small increases in food supplies we make,” Paul Ehrlich confidently declared in the April 1970 issue of Mademoiselle.  “The death rate will increase until at least 100-200 million people per year will be starving to death by 1980.”

“Most of the people who are going to die in the greatest cataclysm in the history of man have already been born,” wrote Paul Ehrlich in a essay titled “Eco-Catastrophe!” warned: “By 1975, food shortages will have escalated the present level of world hunger and starvation into famines of unbelievable proportions.”

“It is already too late to avoid mass starvation,” declared Denis Hayes, the chief organizer for Earth Day, in the Spring 1970 issue of The Living Wilderness.

In January 1970, Life reported, “Scientists have solid experimental and theoretical evidence to support…the following predictions: By 1980, urban dwellers will have to wear gas masks to survive air pollution…by 1985 air pollution will have reduced the amount of sunlight reaching earth by one half.”

Paul Ehrlich chimed in, predicting in 1970 that “air pollution…is certainly going to take hundreds of thousands of lives in the next few years alone.” Ehrlich sketched a scenario in which 200,000 Americans would die in 1973 during “smog disasters” in and .

Ecologist Kenneth Watt declared, “By the year 2000, we will be using up crude oil at such a rate…that there won’t be any more crude oil.

Harrison Brown, a scientist at the National Academy of Sciences, published a chart in Scientific American that looked at metal reserves and estimated that humanity would totally run out of copper shortly after 2000.  Lead, zinc, tin, gold, and silver would be gone before 1990.

Senator Gaylord Nelson wrote in Look that, Dr. S. Dillon Ripley, secretary of the Smithsonian Institute, believes that by 1995, somewhere between 75 and 80 percent of all the species of living animals will be extinct. 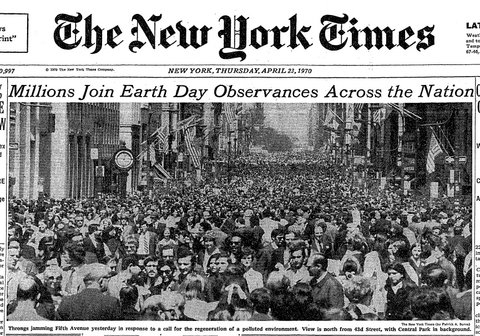 Now folks I gotta be honest with you here, and in case you failed to notice, NOT A SINGLE ONE of these apocalyptic predictions came true—in fact, history has proven that they are some of greatest lies ever told to the American people by their leading mainstream news organizations, political leaders and “expert” scientists!

In a rational and sane world the people that whipped up this type of hysteria would be banished from normal society forever—but we all know this didn’t happen with, instead, these lunatics being celebrated as modern day heroes and visionaries—such as former US Vice President Al Gore being awarded an Oscar for his 2006 global warming/climate change horror movie “An Inconvenient Truth”—wherein Gore warned/declared that unless we took “drastic measures” to reduce greenhouse gasses, the world would reach a “point of no return” by 2016.

Following Gore’s lead in 2008, the popular mainstream media television programme Good Morning America warned their viewers that because of global warming/climate change, in 2015 the price of a gallon of gas would be $9 a gallon and milk would be $13 a gallon, too. 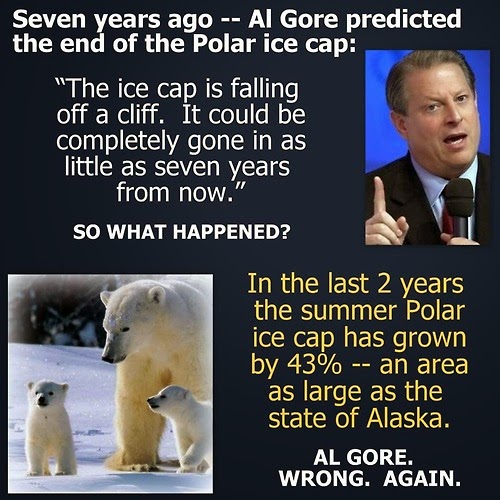 To keep being honest with you here, I do have to give a “sort of” shout out to the Good Morning America televisions 2008 prediction of fuel prices hitting $9 a gallon—but not in 2015 as they predicted, nor in America—but in France, in 2018—where today the French people are tearing their nation apart because of outrageously high fuel prices being imposed on them against their will by a climate alarmist government in a world that’s overflowing with cheap fuel.

To any of you wondering why these thoroughly discredited climate change/global warming lunatics are being revered and followed, you must first understand that what they espouse isn’t a science, but a “religion”—which is a modern Western concept whose parallel concepts are not found in many current and past cultures—as there is no equivalent term for religion in many languages, and scholars have found it difficult to develop a consistent definition, with some giving up on the possibility of a definition, while others argue that regardless of its definition, it is not appropriate to apply it to non-Western cultures.

Most important for you to know about “religion” is that in many Western societies, mainly America, is it being wrongly likened to “belief”—an acceptance that a statement is true or that something exists—best exampled by your knowing that there is no such thing as a Christian “religion”, there is only Christian “belief”—with the beliefs of Christianity that have been brought down through the ages being: “The Bible is the only inspired, infallible, and authoritative written Word of God, penned by man with the leading of the Holy Spirit”—and—“There is one God, eternally existent in three persons: God the Father, God the Son, and God the Holy Spirit.” 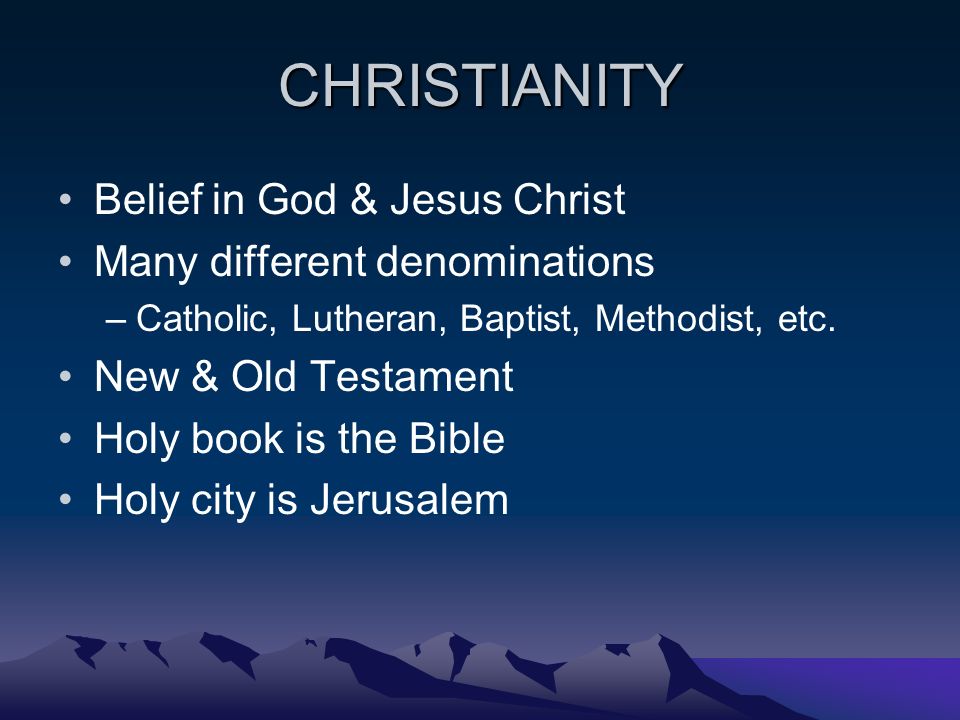 Next for you to understand is that while a “belief” is an individual act, “religion” is a “system”—a set of connected things or parts forming a complex whole—that is created using “propaganda”--information, especially of a biased or misleading nature, used to promote or publicize a particular political cause or point of view—and induces in its adherents “cognitive dissonance”—the state of having inconsistent thoughts, beliefs, or attitudes, especially as relating to behavioral decisions and attitude change.

Therefore, “religion” has no other function or purpose than to turn human beings into raving lunatics who, in turn, are able to be manipulated and controlled by their slave masters—and whose only antidote for is “belief”.

By living a life of “belief”, the Sisters of Sorcha Faal were able to truthfully report to you last July-2017 that despite the lies being spread by the climate change/global warming “religion”, global sea levels were falling—with their, also, being able to report to you this past week that the ocean circulation in North Atlantic is at its weakest for 1,500 years - and at levels that previously triggered a mini Ice Age.

With “religion” having spread beyond climate change/global warming alarmism into every facet of life, too, the Sisters using “belief” were able to warn you on 18 December 2017 that the cryptocurrency Bitcoin was a scam as its price was soaring over $20,000 towards what “experts” were predicting would reach $400,000—and for those who listened and heeded this warning, saved their fortunes from the Bitcoin crash that now sees its value being less than $4,000 today.

For those of you who have long followed the Sisters, their “belief” way of trying to help those in need have further allowed them to warn of many other things, too—such as:

2.)    An October 25, 2008, Sorcha Faal report titled Iranian Leader In Secret Meet With Obama At U.S. Military Stronghold In Hawaii lays the basis for the rapprochement between the United States and Iran that occurred 7 years later in 2015 with the signing of the Iran nuclear deal framework.

3.)    A February 24, 2014, Sorcha Faal report titled Putin Orders Troops To Crimea Passes, Warns NATO Of War said that Russia was preparing for “all out war”—and was confirmed as being true in March 2015 when Russian President Vladimir Putin admitted that he had been ready to put his country’s nuclear forces on alert over Crimea.

4.)    An August 1, 2014, Sorcha Faal report titled India Shocks World, Joins Russia Against Obama Regime said that the destruction of Muammar Gaddafi was due to his plan to start having Libyan oil paid for in gold—and was confirmed as being true by Vice News in January 2016 from a April 2, 2011 email sent from Sidney Blumenthal  to then Secretary of State Hillary Clinton revealing that the invasion of Libya was launched to prevent Muammar Gaddafi from establishing a pan-African currency based on Libya’s gold Dinar for the use selling oil.

5.)    A November 7, 2015, Sorcha Faal report titled Russian Emissary Death In U.S. Spurs Flight To Moscow Of Plane Shootdown Terrorists highlighted the believed to be at the time heart attack death of Russian media tycoon, and President Vladimir Putin aide, Mikhail Lesin in Washington D.C.—but whose death was revealed four months later, on March 10, 2016, to have been caused by “blunt force injuries to his head”. 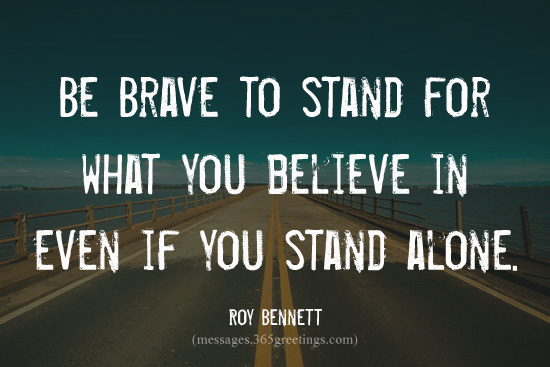 Even on 22 October 2016, two weeks before the presidential election, Sister Ciara wrote to you and said Donald Trump would win, with her further stating: “And before anyone objects to my stating that Donald Trump is on the cusp of achieving a landslide victory, let me assure you this is based on fact, not supposition.”

So here’s what continually perplexes me folks—why do the people the Sisters keep helping with their “belief’ fail to support them—with their instead still relying on a “religion” whose enormous lies are only matched by how often they’re ignored?

And with Sister Ciara’s letter to you yesterday--Graveyard Of Christianity Rises In America As Satan’s Harvest Nears—proving how late the hour really is, do any of you think like me that if those who “believe” don’t start standing up and supporting those of helping them all could be lost?

For those of you thinking like me, and by all means, can you take a minute or two and go below to give what you can to the Sisters today?  After all, what they’ve done is tell you the truth their “belief” tells them to—and for doing that are attacked without mercy and lead lives of poverty, while these “religious” liars continue to be rewarded with riches, power and fame.