Though not surprising in the least, I find it extremely interesting that Sister Ciara’s 22 October 2016 letter “Donald Trump Landslide Victory Races World War III To Finish Line”, that told you “Donald Trump is on the cusp of achieving a landslide victory, let me assure you this is based on fact, not supposition”, has now been joined exactly four years to the date later by her 22 October 2020 letter “Winter Has Arrived As Trump And America Reach Their Great Gate In History”, wherein she informs you again: “this powder keg will explode on 3 November—because that is the day President Donald Trump will be re-elected”.

And what makes these two Sister Ciara letters predicting a Trump election victory so interesting, is that even though they’re separated by four years, they were both written on the day that Trump achieved what is called the “Holy Grail” of reelection numbers—that yesterday, on 22 October, saw President Trump reaching a 52% approval rating in the Rasmussen poll—that follows the 9 October Zogby Analytics poll showing Trump’s approval at 51%--and as this Gallup polling organization has noted in the past, “all incumbents with an approval rating of 50% or higher have won reelection, and presidents with approval ratings much lower than 50% have lost”—which is why getting over 50% right before the election is considered like reaching the “holy grail”—such as President Obama having a 50% approval rating on 22 October 2012, and his winning reelection two weeks later.

You should know that no other pollster tracked by RealClearPolitics came as close to the final results as Rasmussen did in the 2016 election—and while the Sisters have given you dozens of reports over the years describing how nearly all of the polls you see are no better than propaganda garbage, yesterday Sister Ciara warned you that none of those who spout these lying polls at you are idiots, rather they’re pushing an agenda.

And if you want to know what this agenda is, just go to the mysterious website called “Donald Trump Watch” just set up in Communist China—that’s being used by ANTIFA, Black Lives Matter and other such radical socialist terrorists to find the home addresses of everyone that supports President Trump—and while you contemplate that horror, keep in mind that these are the same radical socialist revolutionary forces preparing to unleash what they call a “By Any Means Necessary” war on America beginning on 3 November when Biden doesn’t win—and whose stated war plan is:

We could be in the streets throughout the fall and into the winter– maybe as lots of rolling waves of action or possibly as a few major tsunamis!

In other parts of the country, as vote counts conclude, our focus will turn from protecting the vote counts to themselves being ungovernable.

As it becomes clear that Trump’s coup is failing, institutions and the elites will start to abandon him – or we will approach them as part of the problem.

Either Amazon will shut down AWS for the Trump loyalists in the government or we’ll shut down their fulfillment centers.

Either governors will tell their national guards to stand down or we’ll shut down their state capitals as well.

Over time, Trump will grow increasingly isolated and his empire will crumble down around him.

Then — and this is the important part — Biden will move into the White House and be sworn in as the 46th President of the . 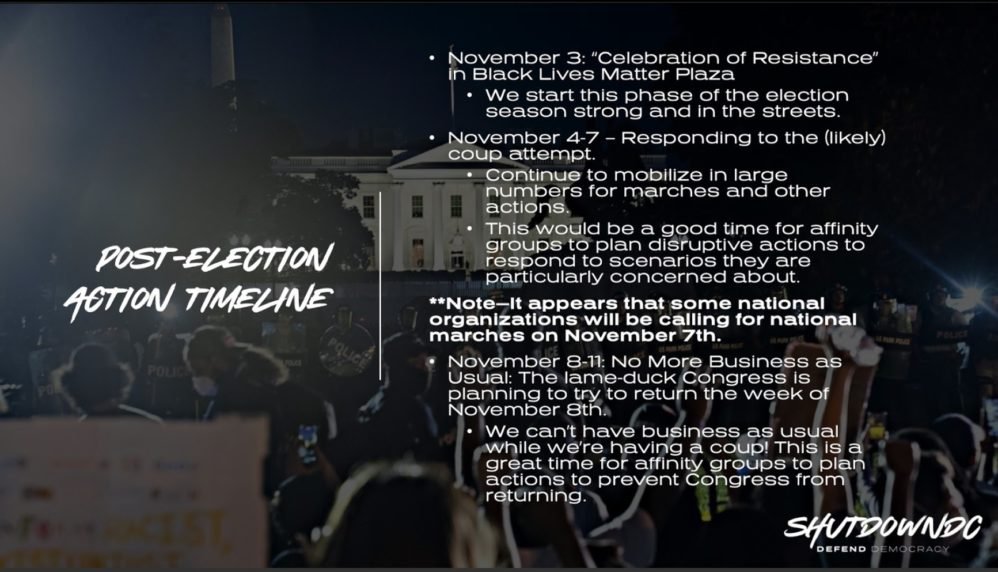 As all of you should know by now, this radical socialist revolutionary “By Any Means Necessary” war against President Trump and the American people is being aided by leftist social media giants and the mainstream propaganda media—leftist support of these socialist revolutionaries that this past week saw Facebook and Twitter censoring all stories about Hunter Biden’s laptop—that was followed by Facebook banning the news satire website Babylon Bee because they ran a story with the headline, “Senator Hirono Demands ACB Be Weighed Against A Duck To See If She Is A Witch”—after which Facebook suspended the account of a black man named Jamie Allman because he posted a video of black Trump supporters shouting “We Love Trump” in Washington D.C.—and then saw Twitter flagging the account of the Detroit News because this newspaper endorsed Republican John James’s US Senate campaign over incumbent Democrat Gary Peters.

Now while this is going on, you should know that leftist NBC News has put a woman named Brandy Zadrozny in charge of their operation to discover and destroy anyone found supporting President Trump—that shouldn’t in any way shock or surprise you, because this is the same corrupt and lying mainstream media establishment that yesterday entirely ignored the bombshell press conference given by former US Navy officer Tony Bobulinski where he detailed the crimes committed by Joe and Hunter Biden—who were all joined in this suppression of the truth by the American taxpayer funded NPR news service announcing yesterday it would not cover the bombshell Hunter Biden story first reported by the New York Post, claiming that the story “doesn’t amount to much” and might be connected to Russian interference—and whose reason for banning, censoring and suppressing all truth, is because the leftist mainstream media has branded as propaganda everything not adhering to radical socialist ideology—and whose master plan to kill off all free speech and thought in America was yesterday laid out in full by leftist media giant Bloomberg News in their chilling article “Biden’s First War Would Have to Be Against Propaganda”—that in full Orwellian Doublethink says: “The U.S. won’t return to anything like political health so long as tens of millions live in a dystopian triangle bounded by MAGA, Facebook and Fox...Breaking the hold of this collective delusion is a national imperative”—and these leftist threw Facebook into this mix because it still allows its users to speak freely among their friends and families.

Standing between you and these mobs of radical socialist revolutionaries preparing to destroy America, along with their leftist social media giant and mainstream propaganda media allies, is President Donald Trump and the overwhelming majority of the over 854,000 people holding top-secret clearances in the United States Intelligence Community—all of whom start their days reading the most accurate and truthful intelligence reports about what is really happening, as opposed to the fairy tales lies published in the leftist mainstream media—intelligence reports specifically written following guidelines established by the Directorate of Intelligence Style Manual & Writers Guide For Intelligence Publications, as well as guidelines established in the Institute for Intelligence Studies instructional The Analyst’s Style Manual—though one of my personal favorites for intelligence report writing is Richard T. Puderbaugh, who’s been designated Chief Word Watcher, Western Hemisphere Division at the CIA.

The reason I’m telling you this is twofold—the first being that when you read a Sorcha Faal report you understand why they’re not written in style you’re familiar with, and you should know every one of them is ultimately examined by retired US military intelligence experts for accuracy and honesty (Seriously, these are hard minded professionals!)—and secondly to help you understand that the government of the isn’t a bunch of bureaucrats and politicians, It Is You.

I can’t stress enough to you the importance of you remembering this fact—because when you do, you’ll understand why those working hardest to protect you and your nation have taken a solemn oath until death to protect an old piece of parchment called the Constitution of the United States of America—and in protecting, keep at the forefront of their mind the words of Founding Father Thomas Jefferson, “The price of freedom is eternal vigilance”.

For those of you knowing what I’m talking about, I say to you “Malo periculosam, libertatem quam quietam servitutem”—and for those of you who do not, and hopefully are still awakening, I’ll leave you today with the words and plea given to you four years ago, on 22 October 2016, from Sister Ciara in the ending of her letter to you that are as critical for you to know now as they were then: