“One of the best kept secrets of science is that physicists have lost their grip on reality.”

The quote from American physicist Nick Herbert I’ve cited to begin this letter is contained within the statement “Almost one hundred years ago, the project to reduce the world to mathematical physics failed suddenly and completely” given by legendary mathematician-physicist-philosopher genius Wolfgang Smith, who demonstrates in the powerful documentary “The End Of Quantum Reality” on shockingly obvious grounds the dead end at which physics has arrived, and how we can “return, at last, to the real world”.

The non-real world that caused physicists to lose their grip on reality was created by Renaissance-era mathematician and astronomer Nicolaus Copernicus (1473-1543), who formulated a model of the universe that placed the Sun rather than Earth at the center of the universe—and whose 1543 published book De Revolutionibus Orbium Coelestium remains the seminal work on the heliocentric theory.

Everything went well for the heliocentric theory until 1871—which was when English mathematician and astronomer George Biddell Airy devised his famous water experiment that spectacularly failed to prove Copernicus’s theory, and is known as “Airy’s Failure”—a failure followed by American physicist Albert A. Michelson (who calculated the speed of light) and American scientist Edward W. Morley (famous for his extremely precise and accurate measurement of the atomic weight of oxygen) conducting their Michelson–Morley Experiment in 1887 to prove the heliocentric theory, that also ended in failure—a failure famed German theoretical physicist Albert Einstein  wrote about saying: “If the Michelson–Morley experiment had not brought us into serious embarrassment, no one would have regarded the relativity theory as a halfway redemption”—with Einstein’s specifically referencing his own General Theory of Relativity—that itself has spectacularly failed, because Einstein’s theory can’t answer “The Hard Problem of Consciousness”—and to put the proverbial final nail into the coffin of nearly 500-years all of these most revered and protected at all costs scientific dogmas, this was accomplished by the Sloan Digital Sky Survey and the Planck satellite data confirming that the Copernican model of the universe may be faulty and the Earth really is the center of the universe. 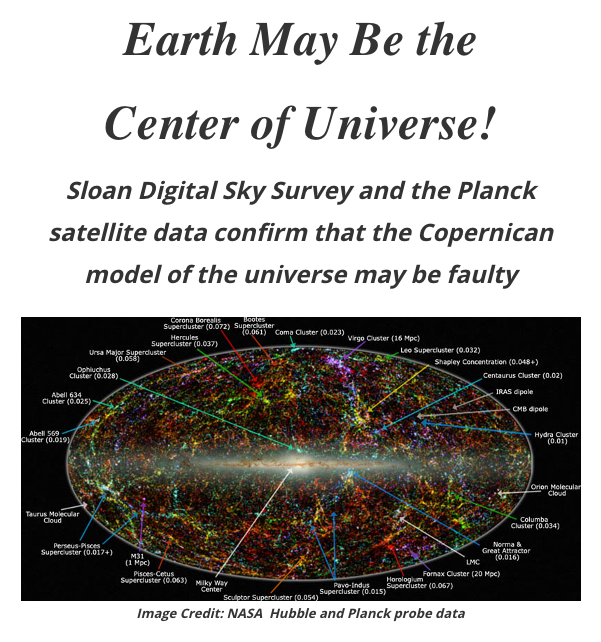 With physicists the world over having lost their grip on reality while watching everything they’ve believed to be true crumble into dust, now Professor Donald Hoffman from the University of California-Irvine has come along to publish his mathematical equations proving that the theory of evolution isn’t true either—which leads one to wonder what the scientific community is going to do next as they try to come to grips with his existential crisis—and who are rapidly finding themselves being supplanted by thought leaders in the Traditionalist School, as well as by some of the top scientific minds now flocking to such organizations like the Philos-Sophia Foundation.

What is actually arising from among the ruins of the shattered forever scientific foundations our world no longer stands on, is a return to and re-examination of what the ancients wrote about and said—with the intent being to rebuild from scratch what was once known, and see how and/or if it can apply to our world today.

The most important example of this that will aid you in better understanding both President Donald Trump and this tumultuous year of 2020, is the re-examination of the writings and sayings of Aristotle—the Greek philosopher and polymath whose works form the basis for Western Civilization, who lived over 2,300-years-ago—and today sees intense focus being centered on two of his sayings—“We are what we repeatedly do. Excellence, then, is not an act, but a habit” and “He who is unable to live in society, or who has no need because he is sufficient for himself, must be either a beast or a god”.

At the forefront of this re-examination of these Aristotle sayings to discover their applications and importance to our world today, are leading scientists such a British biologist Rupert Sheldrake, Ph.D.—who in his research paper “Most Of The So-Called Laws of Nature Are More Like Habits” states: “The habits of nature depend on non-local similarity reinforcement…Through a kind of resonance, the patterns of activity in self-organizing systems are influenced by similar patterns in the past, giving each species and each kind of self-organizing system a collective memory”.

The significance of what Dr. Sheldrake has been discovering is that human beings exist in a “self-organizing system” just like animals do—where within “habits” are acquired, and by repeated actions sees this system always growing towards excellence—which in the animal world can be seen evidenced in flocks of birds and schools of fish performing amazing feats while operating in unison—and in human beings can be seen in any birds eye view of people navigating traffic on busy city streets, either by car or in walking—and sees Professor Emeritus Dr. Marc Bekoff further observing that “any animal that travels or hunts in a group has to have a way of moving where they're not colliding all the time”, and who says that “human social groups are also coordinated by these fields”.

For you to fully grasp the significance of all this, consider first the very special Monarch Butterflies—who in their “self-organization system” pass navigation “habits” through their children, grand children, great grand children and great, great, grand children—they are born 9,000-feet above sea-level 100-miles from Mexico City—then they fly north to the United States and die—then their children travel further north and they die—their grand children then travel even further North East of the Rocky Mountains and die—then the fourth generation flies back to Mexico and the cycle starts over again.

With scientists having long known that there is no genetic explanation for what these Monarch Butterflies are doing, their attention to what exactly “self-organizing systems” are and the “habits” within them are learned has greatly expanded—which has led to one of the most amazing and remarkable discoveries ever made, known as the new therapeutic method called Family Constellations—that holistically views a human family, to include all of its past and future members, as a “self-organizing system” whose “bad habits” can be changed, and “new habits” learned—even to the extent that past family members having “bad habits” that died even generations ago, is seeing them being changed into “new habits” able to be passed on to future generations.

Now I’ve guided you down this path of scientific truths and discoveries so I can give you a warning---as at the same time you’re surrounded by your loved ones, the greatest Family Constellation that you’re a part of is your nation—a “self-organizing system” whose centuries old “habits” are now under an unrelenting attack by evil forces, who know more about these things than you are capable of learning in the time you need to protect yourself.

Which is why our Dear Lord created for all of humanity the most powerful “self-organizing system” of all time known as the “Body Of Christ”—whose “habits” will make you undefeatable and triumphant against all evil—and to start learning these “habits”, is as simple as your saying: “Dear God, I know I’m a sinner, and I ask for your forgiveness. I believe Jesus Christ is Your Son. I believe that He died for my sin and that you raised Him to life. I want to trust Him as my Savior and follow Him as Lord, from this day forward. Guide my life and help me to do your will. I pray this in the name of Jesus. Amen”.

For those of you today who’ve now found protection in the “Body Of Christ”, for those of you who’ve been so protected, and even for those of you who in the future might remember these things in an hour of peril—today I leave you all with these words from the Book of Proverbs, Chapter 11, Verses 24 and 25 that say: “One gives freely, yet grows all the richer; another withholds what he should give, and only suffers want. Whoever brings blessing will be enriched, and one who waters will himself be watered.”—words as a reminder that when you answer our desperate plea and aid us, right now, in our mission of truth, by going below and giving what you can, it is really our Dear Lord you’re blessing with your gift, and who is waiting to make you richer for doing so!

(Please note that those who respond to this appeal, in any amount, will receive, at no charge, Sorcha Faal’s September, 2020/October, 2020 lecture series to the Sisters of the Order titled “Total War: the Collapse of the United States and the Rise of Chaos: Part 102”.  This is another one of the Sorcha Faal’s most important lectures dealing with the coming timelines of war, famine, catastrophic Earth changes and disease as predicted by ancient prophecies.)