And as always, sorry it’s taken me so long to write you—it’s just been an extremely busy month as you know.

Anyway, I’ve been watching these past couple of days the “media” response to the latest JFK Assassination Records “release”—which I don’t even know why it’s being talked about like it is as it contained only 52 new documents that had previously been completely withheld, and that were in 2,839 previously redacted documents that account for less than 10% of what remains in the National Archive files no one’s allowed to see.

Now if my working with the Sisters for these past over 30 years has taught me anything, it’s how to know pap when you see it—and this JFK assassination file “release” is PAP writ large! (Note: For you non-Brits, “pap” is short for “pablum” which is “bland or insipid intellectual fare, entertainment, etc.”)

The most outlandish example of this JFK assassination records pap is the gazillion stories (such as this one) ricocheting around the internet about a CIA memo document detailing how the small British newspaper Cambridge News received a phone call 25 minutes prior to the 22 November 1963 public execution of President John F. Kennedy pre-warning them that “something big” was about to happen. 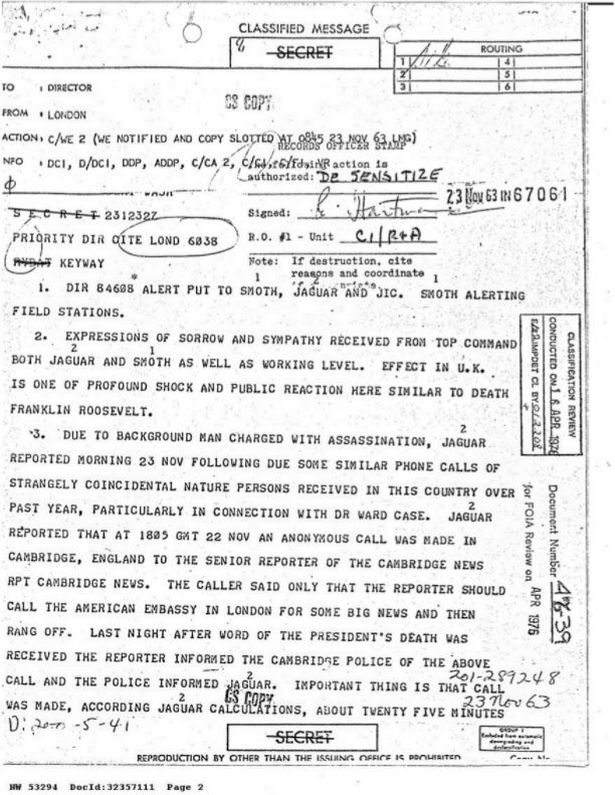 CIA communication from Station on 23 November 1963

What began concerning me about this CIA memo was its being described in USA Today as being written by “CIA’s James Angleton”, while at the exact same time, Newsweek Magazine described it as being written by “FBI Deputy Director James Angleton”—with the vast majority of Western media outlets taking Newsweek’s “cue” to lie about who Angleton really was.

For anyone wondering why the CIA would make its propaganda mainstream media organs disown Angleton, you shouldn’t be surprised—because James Angleton, who was the Chief of CIA counterintelligence when President Kennedy was executed, and who famously described his world as a “wilderness of mirrors”, was known by both the FBI and CIA “to have been nothing other than a paranoid conspiracy theorist who paralyzed CIA intelligence operations against the Soviet Union and never caught a spy”.

It’s important for you note Angleton’s saying in his memo about the mysterious phone calls flooding Britain during the year prior to President Kennedy’s execution their being “particularly in connection with the Dr. Ward case”—and is critical for your understanding that even though Angleton never “caught a spy”, he was America’s best at murdering them!

And that was exactly why Angleton was in London during 1963—and who, just 3 months prior to President Kennedy being executed, masterminded the 3 August murder of Stephen Ward so that MI5’s and MI6’s “sticky fingers” wouldn’t be seen on it—but with all of them having “decided that Ward had to die” due to what he knew about the political-sexual-spy scandal known as the “Profumo Affair”—and whose sordid “honey trap” links traveled directly to President Kennedy!

It’s not an exaggeration to say that the murders of Stephen Ward and President Kennedy were able to keep the lid on how vast the KGB’s “honey trap” network operating in London and Washington D.C. really was, and who was being blackmailed into committing treason—and that, literally, barrels of ink have been spent over these past 54 years speculating about—and is why absolutely everyone dealing in these “deep intelligence” issues didn’t even care when this Cambridge News memo was released—in July, NOT two days ago!

The reason none of us “deep intelligence” types didn’t care about this Cambridge News “warning” memo from the CIA was because we had already been told about it, and read it, 22 years ago, in 1995!

As to how we “deep intelligence” types were able to gain access to this CIA memo 22 years ago is thanks to our mysterious “friend” we all call the “Lobster”—and that refers to “Lobster Magazine” who, since 1983, has published its twice-yearly “must read” parapolitics (the impact of the intelligence and security services on history and politics) intelligence journal—and whose ISSUE 30, published in December 1995, contained the report titled “JFK, the FBI and the Cambridge Phone Call”.

Listen to me very carefully now—the same intelligence “forces” that manipulate you through the “mainstream” media, also use the press to communicate with each other by transmitting “instructions” and “threats”—with this supposed “new” Cambridge News memo being, most assuredly, a “threat” message.

But, is this “threat” being issued against President Trump by the CIA—“Look what we did before, you want to be next?”—or—is it being issued by Trump against the CIA—“I know what you did, I know your tricks, I’m waiting for you.”—a plausible case of which can be made for either—but ONLY at this point.

Ordinary “normal” people don’t even have a clue about any of these things—and neither should they, as this “world” has its own language and set of rules—and anyone entering into it without knowing anything, or having decades of intelligence experience like the Sisters do, would be like you traveling to a country you don’t know the language of and trying to exist.

That, in case you didn’t know, describes the “relationship” you have with the Sisters—who are your “interpreters” in this strange and mysterious (and REALLY scary) intelligence “world”—and who keep you apprised as to what’s going on so you can protect yourself.

Needless to say too—while most of you are viewing this “war” from the safety of your homes, the Sisters are operating on the front lines, and behind the enemy lines, of this conflict risking their lives on your behalf every day—and just like you, are real live human beings needing to eat food and drink water to survive, and have loved ones who care deeply about them and want them to come home safe.

So, can you PLEASE aid them like every “Home Front” family has done in all wars past to support those fighting for them and airdrop the Sisters a care package?

Just a mere US $20.00 from all of you would aid them greatly—and you know it’s the right thing to do—and it’s as simple as clicking on the link below!