US Plasma Beam Opens “Hyper-Dimension” Over

The High Command of the Aerospace Forces (HCAF) is reporting today that its Space Forces (SF) have detected a “hyper-dimensional” [of or pertaining to a system having more dimensions than naturally observed in our universe] “opening event” occurring over after the firing of a US Navy Trident II missile.

According to this report, Space Forces experts who are charged with the monitoring of potential threats to the Federation in space and from space, and the prevention of attacks as needed, first notified the High Command on Friday (6 November) that a large US Navy flotilla operating off the Southern and Central coasts of California had closed the airspace over their operations area and notified their nations civilian authorities.

Even more concerning to these Space Forces experts, this report continues, was that at the same time this vast US Navy flotilla was preparing to fire a Trident II missile, Federation satellites operating over North American detected an enormous energy surge (plasma discharge) emanating from the SLAC National Accelerator Laboratory located in Menlo Park, California.

At approximately 0200 GMT (6 p.m. local California time 7 November) this early morning, this report says, a “peak energy” event was detected at the SLAC National Accelerator Laboratory while at the same time a Trident II (D5) missile was fired from the USS Kentucky, an Ohio Class submarine, in the Pacific Test Range off the coast of Southern California.

Upon the “meeting/joining” of the Trident II missile and the “plasma discharge” fired from the SLAC National Accelerator Laboratory, this report explains, a “hyper-dimensional” “opening event” occurred in the skies over California and was witnessed by thousands of people who described what they saw as a UFO or meteor—but is more accurately described (as numerous videos show) as a “blue colored hyper-dimensional tear” following the instrument laden warhead used for measuring this event. 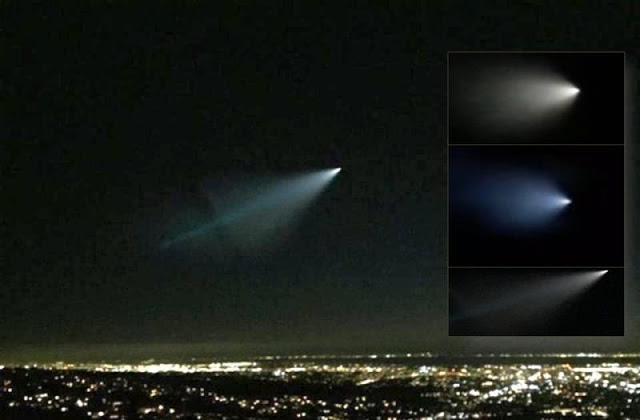 Critical to note, this report further states, is that this is was just the latest Western to attempt at a “hyper-dimensional” opening to our Earth, with the last one being tried on 8 December 2009 over the skies of Norway—where the US, operating in conjunction with the massive CERN accelerator in Switzerland, likewise, caused a “blue colored hyper-dimensional tear” to appear in the skies. 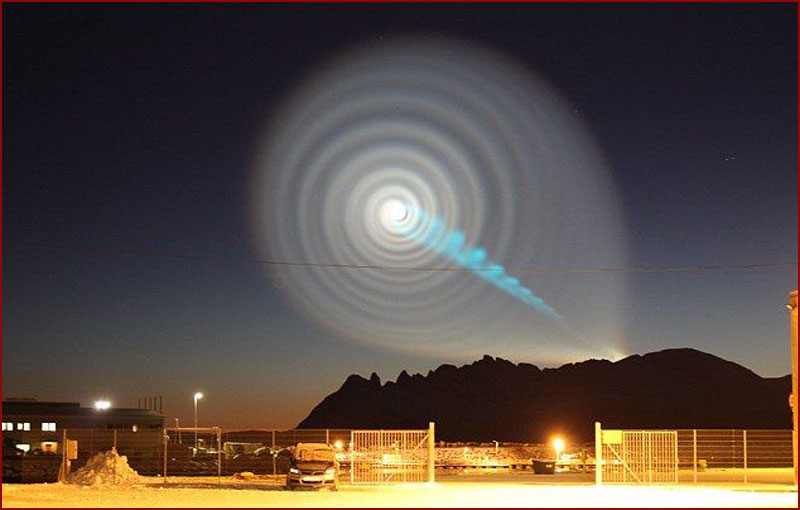 In our 10 December 2010 report (Attack On Gods ‘Heaven’ Lights Up Norwegian Sky) we described that previous event as follows:

“On Tuesday evening, 8 December, CERN's Large Hadron Collider (LHC), located in Switzerland, “smashed together subatomic particles at the highest energies ever reached by a human-made accelerator” which were then ‘quantumly’ transferred to the massive Partial Reflection Medium-Frequency (MF) Atmospheric Radar Facility located in Ramfjordmoen, Norway, operated by European Incoherent Scatter Facility (EISCAT) radar and ionospheric heating scientists who, in turn, work under the supervision of the American High Frequency Active Auroral Research Program (HAARP) that many call one the largest ‘weapons of mass destruction’ ever constructed.

Now upon this ‘quantumly’ transferred high-energy beam being received in Ramfjordmoen, it was then ‘pulsed’ vertically into the upper atmosphere above Norway at 2.43 MHz by their MF Radar antennas which resulted in a ‘spiral’ light display [photo top left] described by Britain’s Daily Mail News Service as:

“A blue light seemed to soar up from behind a mountain in the north of the country. It stopped mid-air, then began to move in circles. Within seconds a giant spiral had covered the entire sky. Then a green-blue beam of light shot out from its centre - lasting for ten to 12 minutes before disappearing completely. Onlookers describing it as 'like a big fireball that went around, with a great light around it' and 'a shooting star that spun around and around'.

To the purpose of today’s “military-accelerator” “hyper-dimensional” test over California, like Norway in 2009, this report concludes, the West has made no secret of its goals either—and as best explained by CERN’s Director for Research and Scientific, Sergio Bertolucci, who in November, 2009 stated: “Out of this door might come something, or we might send something through it.”

As to whom, or what, the West wants to come through these “hyper-dimensional” rifts they’re creating this report doesn’t say—but it does cause one to pause when the main Western source behind these “hyper-dimensional” events in Norway and California is CERN—especially when this organization has embedded in its logo the “Mark of the Beast number 666” and has erected in front of its main administration building a statue dedicated to the Hindu god Shiva—Shiva the destroyer of worlds.

November 8, 2015 © EU and US all rights reserved.  Permission to use this report in its entirety is granted under the condition it is linked back to its original source at WhatDoesItMean.Com. Freebase content licensed under CC-BY and GFDL.