“There will be signs in the sun and moon and stars…and on the earth dismay among nations...”

For those of ebionitic thought among our Order following kabalistic disciplines, these past three days have now been placed into their proper order with the predicted 14-year signs having been shown, interpreted and the path to follow now certain.

As this discipline explains, being a multiple of 7, 14 partakes of its importance and, being double that number, implies a double measure of spiritual perfection (i.e. knowledge).

The number 2 with which it is combined (2x7) also brings its own significance into its meaning, as it does in Matthew 1, where the genealogy of Jesus is divided up and given in sets of 14 (2x7) generations, meaning that 2 signs of significance would be made manifest…one for each 7 year period.

One must understand, of course, that according to this discipline, an event, especially those of world importance, can never be fully understood until its 14-year signs are manifested…which in this particular case was the 11 September 2001 (9/11) attacks upon the United States, and whose 14-year anniversary was yesterday.

And as predicted by these Sisters of ebionitic thought, the 14-year signs of 9/11 did, indeed, occur…the first being the double rainbow sign over the destroyed site of the World Trade Center complex in New York City on 10 September, and the other being the destruction wrought upon Mecca (Islam’s holiest site) when a lighting strike toppled a crane being operated by the bin Laden family (whose son Osama was accused of this attack) and killed at least 107 on 11 September. 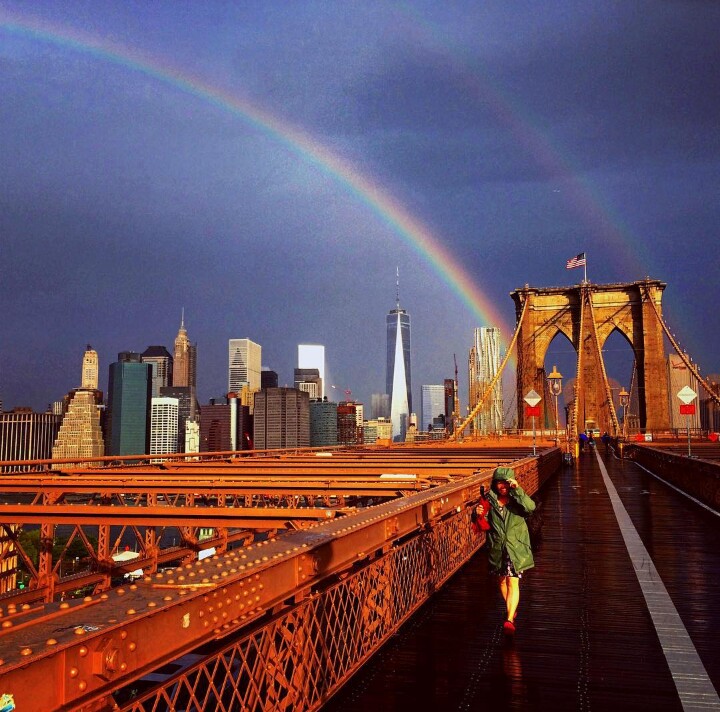 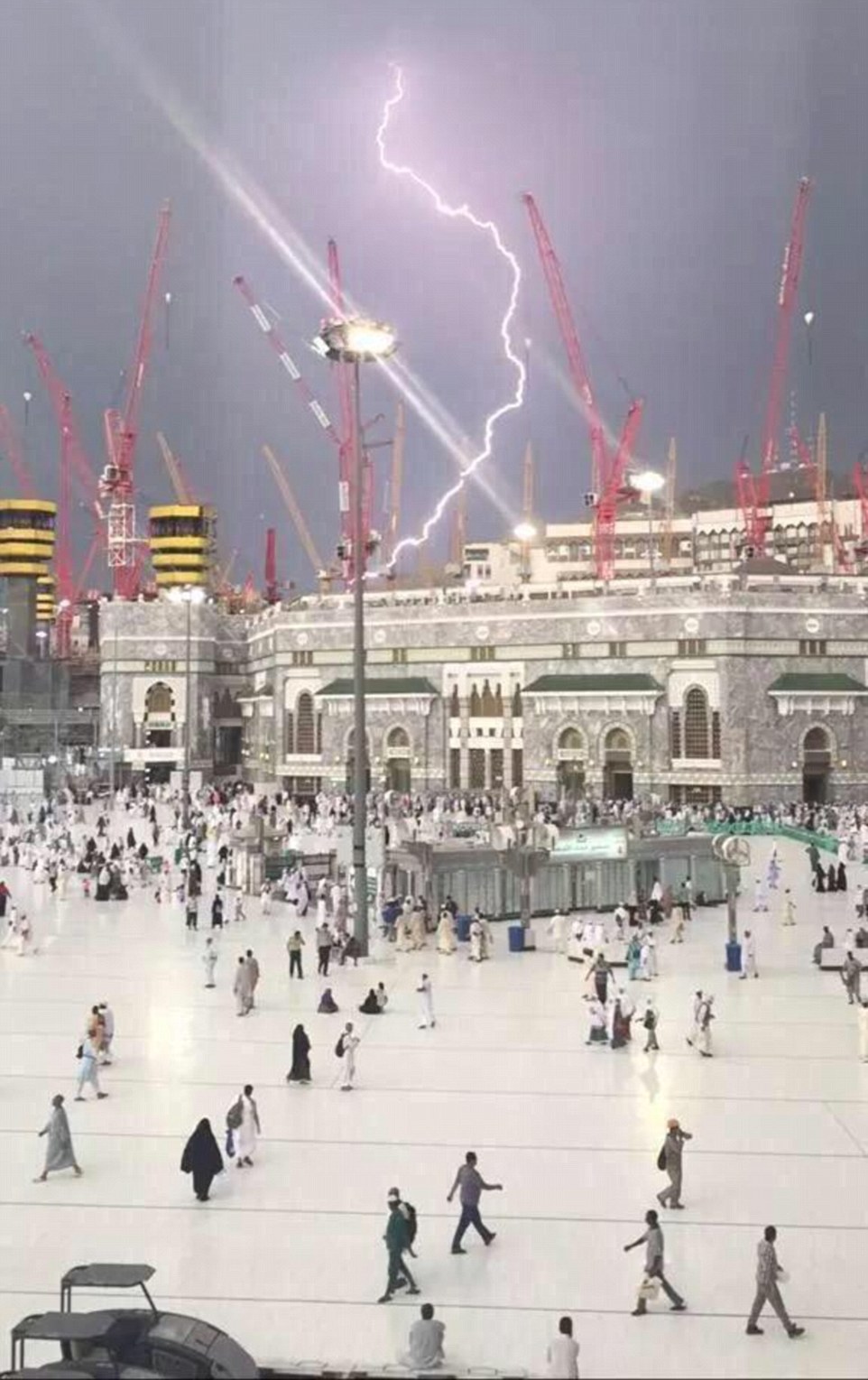 In their most simplistic interpretation of these 2 signs, these Sisters note that the double rainbow over the destroyed World Trade Center site one day prior to the 14th anniversary of 9/11 can reaffirm to the peoples of this great city of God’s mercy should they turn to Him again…for He has been reminded of their tragedy and sorrow and what they were once like before this destruction was wrought upon them... “And the bow shall be in the cloud; and I will look upon it, that I may remember the everlasting covenant between God and every living creature of all flesh that is upon the earth.” Genesis 9:16

But, to those who caused the great 9/11 destruction and terror, however, the 2nd sign of lighting is a warning of a great destruction to come from God. “His lightning lights up the world; the earth sees and trembles.” Psalm 97:4

Now to fully understand both the “signs of events”, and their interpretations, one needs to know who these particular Sisters of ebionitic thought are…and which I’ll freely admit to you now is nearly beyond normal understanding; if not belief….but is, nevertheless, true.

Jesus was not the founder of Christianity as we know it today. Most of the New Testament doesn't even concern the historical Jesus while the main influence is the Apostle Paul and a Greek convert named John.

This is so because after the death/resurrection of Jesus, the Apostle Paul (who had never met or known Jesus) created Christianity in the image he believed it should be.

Against the Apostle Paul where two of Jesus’s disciples (who knew Jesus), the Apostle Thomas (referred to as Didymus [meaning twin in both the Aramaic and Greek] in the Gospel of St. John) and Apostle Bartholomew, along with Jesus’s brother James and Jesus’s mother Mary.

Where Paul began modern Christianity in the Roman Empire, Apostle Thomas, Apostle Bartholomew, and Jesus’s family, including his mother Mary, left and traveled to where they were protected by the Chola dynasty and in historical terms are referred to as Ebionites.

Ebionites, or Ebionaioi (Greek: Ἐβιωναῖοι; derived from the Hebrew אביונים ebyonim, ebionim, meaning “the poor” or “poor ones”), is a patristic term referring to this Jewish-Christian movement supported by Apostle Thomas and Bartholomew, and Jesus’s family, that existed during the early centuries of the Christian Era and who regarded Jesus as the Messiah while rejecting his divinity.

Due to early Christian writings, the Catholic Church has had no choice but to reluctantly acknowledge Apostle Bartholomew’s travel to and preaching the Gospel in India, and Apostle Thomas’s presence their too… but when Pope Benedict XVI made a statement on 27 September 2006 during a public audience, that Apostle Thomas only reached as far as North-West India (today’s Pakistan), the Vatican was quick to correct it to include Southern India where the Chola dynasty had been located.

From the Apostle Bartholomew traveled to Allanum, a town of the great [modern day southern ] where he was killed.  The Apostle Thomas never left and is entombed in the  city of Chennai.

Before traveling to Chennai, however, the Apostle Thomas buried Jesus’s mother Mary in North-West India (today’s ) in what is now known as the city of Murree (meaning Mary).

Tomb of the Virgin Mary in Murree

Please keep in mind at this point that what I’ve just given to you is but a mere speck of knowledge pertaining to these Sisters of ebionitic thought, and to even begin to attempt to describe their use and mastery of Kabbalah discipline I dare not even try.

Suffice it to say, and as best stated by Professor John Barrow, Director of the Astronomy Centre at Sussex University, “Mathematics underpins the world around us”, but even more, these Sisters are grounded in the “Mathematics of God” that underpins eternity!

And most amazing, included in these Sisters vast knowledge of the “Mathematics of God” is the ancient mathematical knowledge of language too…which, not surprisingly, MIT scientists this spring touched upon with their announcing the discovery of a “language universal” that ties all of the world’s languages together.

To the practical use in today’s world of these Sister’s knowledge you, the reader, have been the main benefiters of these many years as you’ve been able to know the truth of things before they are made manifest to others.

Such as on 28 June 2007 when we released the report titled US Banking Collapse ‘Imminent’ Warns French Banking Giant…that was followed a year later, in 2008, with the “three weeks that changed the world” collapse of the American banking system that was so catastrophic, U.S. Representative Brad Sherman of California said to Congress,  that individual members of the House were threatened with martial law within a week if they did not pass the bailout bill:

“The only way they can pass this bill is by creating and sustaining a panic atmosphere. ... Many of us were told in private conversations that if we voted against this bill on Monday that the sky would fall, the market would drop two or three thousand points the first day and a couple of thousand on the second day, and a few members were even told that there would be martial law in America if we voted no.”

And on 24 February 2014 when we released the report titled Putin Orders Troops To Crimea Passes, Warns NATO Of War that warned you that our world was on the cusp of nuclear war…that was confirmed in April, 2015, when President Putin of Russia publically admitted that Russia was ready to use nuclear weapons if the West attempted to militarily intervene in Ukraine.

But sadly today, and at a time in our history when truth is needed more than ever, our ability to utilize these Sisters unique abilities is threatened nearly beyond hope.

Not because of attacks against us by those who will do anything to keep the truth from you…but from YOU!

Like the preverbal sheep being led to the slaughter, too many of you don’t bother to see or hear anything…even when it’s right in front of YOU!

And where in times past we could simply attempt to reason with you before all was lost, today we have to shout at YOU!  After all, most of you are still asleep.

So my most heartfelt plea to all of you reading this today is to awaken to the grave danger you are in, and once awake start helping those of us trying to help YOU!

We are not financed by the corporate oligarchs who continually lie to you and deceive you…we are, instead, financed by YOU!

Please help us continue in this mission as the time is much shorter than you can ever imagine…and without your support you’ll be at their total mercy.

(Please note that those who respond to this appeal, in any amount, will receive, at no charge, Sorcha Faal’s  August, 2015/September, 2015 lecture series to the Sisters of the Order titled “Total War: the Collapse of the United States and the Rise of Chaos: Part 44”.  This is another one of the Sorcha Faal’s most important lectures dealing with the coming timelines of war, famine, catastrophic Earth changes and disease as predicted by ancient prophecies.)