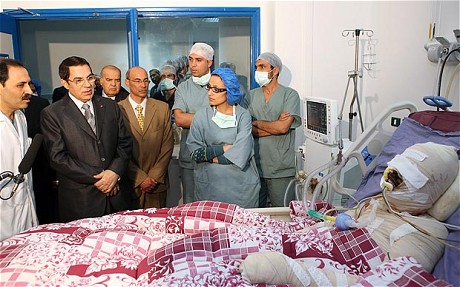 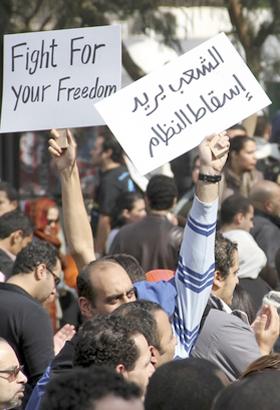 “If you want a vision of the future, imagine a boot stamping on a human face - forever.”

Special Report By: Sorcha Faal, and as reported to her Western Subscribers

New reports coming out of the World Economic Forum in Davos, Switzerland, where many of the top leaders of banking, finance, industry and politics gather every year, are showing great concern over the unprecedented events now threatening to plunge the entire Middle East, if not the entire planet, into total chaos and anarchy.

The spark that ignited the firestorm currently sweeping the planet was struck, literally, by a 26-year-old Tunisian with a computer science degree named Mohamed Bouazizi [photo top middle] on December 17th, who unable to feed his family, and not allowed by his government to even get a permit to sell vegetables, had his face slapped by the police for even daring to ask why he couldn’t be free.

Not content to let his life be written off by his government as worthless, Bouazizi publicly doused himself with gasoline, lit a match, and burnt not only his own body, but the entire consciousness of a world, and its people, being destroyed by the corrupt elites who rule over them.

In less than a month, on January 14th, the fire started by this 26-year-old Tunisian had burnt to the ground the entire government of his country which was forced to resign and its president-for-life, Zine El Abidine Ben Ali, who was forced to flee the country.

The people’s coup in , called the Jasmine Revolution, sent shockwaves throughout the Arab world, but with many experts stating that it wouldn’t spread.  They couldn’t have been more mistaken as the firestorm started by Bouazizi is now burning in Albania, Algeria, Egypt, Hungary, Jordan, Morocco, Saudi Arabia and Yemen.

Striking the greatest fear in all of the world’s present leaders is that this revolution will continue to spread and engulf the entire planet in what has been described as a Fourth Turning Event, and is explained as follows:

“A turning is an era with a characteristic social mood, a new twist on how people feel about themselves and their nation.  It results from the aging of the generational constellation.  A society enters a turning once every twenty years or so, when all living generations begin to enter their next phases of life.  Like archetypes and constellations, turnings come four to a saeculum, and always in the same order:

The Fourth Turning is a Crisis —a decisive era of secular upheaval, when the values regime propels the replacement of the old civic order with a new one.  Old Artists disappear, Prophets enter elderhood, Nomads enter midlife, Heroes enter young adulthood—and a new generation of child Artists is born.

Like the four seasons of nature, the four turnings of history are equally necessary and important.  Awakenings and Crises are the saecular solstices, summer and winter, each a solution to a challenge posed by the other.  Highs and Unravelings are the saecular equinoxes, spring and autumn, each coursing a path directionally opposed to the other.  When a society moves into an Awakening or Crisis, the new mood announces itself as a sudden turn in social direction.  An Awakening begins when events trigger a revolution in the culture, a Crisis when events trigger an upheaval in public life.”

More ominously, one of America’s top writers, Justin Raimondo, is now warning this revolution will soon hit the United States too, and as we can read from his report “The Revolutionary Wave: Tunisia, Egypt, Yemen – is the West next?” wherein he said:

“The revolutionary wave now sweeping the world will not exempt America, in spite of the myth of "American exceptionalism." We cannot and will not be excepted from the iron laws of economics, which mandate that you can’t consume more than you produce – no matter how many Federal Reserve notes (otherwise known as "money") you print.”

This Fourth Turning Event has, also, triggered a move, called “unprecedented and frightening” , with Egypt shutting down the Internet to keep its people from being able to communicate with other, a move that is being planned by the United States too as new legislation currently working its way through the US Congress calls for giving President Obama what is described as an “Internet Kill Switch”.

[Note: Many of you have noticed that our ability to post news stories this past week has been severely curtailed, we apologize for this. The reason this has happened is due to Sister Banafrit allowing many Egyptians to use our dial-up modems in Cairo to access our servers in Paris and London, which with nearly all cell phone service severely curtailed, and the Internet being taken down, has put an incredible burden on our technical infrastructure.]

Not being understood by many Westerners, especially those living in the United States, are that the flames of this revolution will continue spreading as tens of millions of people more will be plunged into poverty as those that rule over them continue gorging themselves at the public trough to enrich themselves and not those they are supposed to serve.

The United States deserves special mention as new reports show that in 2009 over 2.8 million Americans were thrown out of their homes, in 2010 another 2.9 million followed them onto the streets, and 2011 is warned will be even worse as another 3 million are estimated to be thrown out into the streets too.

To how soon this revolution currently sweeping the world will reach your door it is not in our knowing, other than to state that it will be sooner than later.  And to how well you can be protected, especially while you’re being fed a steady diet of propaganda by your so called leaders, depends entirely on you supporting us, and those like us, who, even at this very moment, like Sister in Banafrit in , continue to risk their lives to keep you informed.

If you want lies and distortions than by all means continue supporting your mainstream propaganda media, but if you want the truth than start supporting those like us whose sole motivation is to keep you informed, educated, and most importantly, safe.

That is why many of you are not surprised by this revolution sweeping our planet because you have followed the Sorcha Faal’s lectures on exactly what is happening now and understand not only the reason’s for it, but have begun protecting yourselves and your families.

To those of you who do not know what is happening,  it would be our honor to present to you the Sorcha Faal’s entire lecture series regarding the Fourth Turning Event for your kind donation of any amount you are able to afford to help us in our efforts.

And in closing, it is vital that you remember the most important element in all Fourth Turning Events…expect the unexpected!

If every one of you reading this gave just $20.00 our budget for the entire year would be met!  So, before you click away, ask yourself this simple question….if your knowing the truth about what is happening now, and what will be happening isn’t worth 5 cents what is?

(Please note that those who respond to this appeal, in any amount, will receive, at no charge, Sorcha Faal’s December, 2010/January, 2011 lecture series to the Sisters of the Order titled “Total War: the Collapse of the United States and the Rise of Chaos: Part 19”.  This is another one of the Sorcha Faal’s most important lectures dealing with the coming timelines of war, famine, catastrophic Earth changes and disease as predicted by ancient prophecies.)