Next Chapter Of American Civil War— Of ?

In the aftermath of World War I—that lasted from 28 July 1914 to 11 November 1918, and left over 68-million dead—it saw the ending of the Russian Empire (1721-1917) German Empire (1871-1918), the Ottoman Empire (1299-1922), the British Empire (1707-1914) and the Habsburg Empire (1282-1918)—the last of which is worth your attention, because when the Habsburg Empire imploded, a group of “intellectuals” calling themselves the Illyrian Movement got the winning Western powers of this war to sign the Corfu Declaration in 1917—an agreement which carved out of the disintegrated Habsburg Empire its Balkan regions in the southeast of Europe to create a new nation called Yugoslavia—a name created by the combining he Slavic words “jug” (meaning south) and “slaveni” ( meaning Slavs)—saw this nation existing from 1918 to 1941 because it was annexed by Nazi Germany during World War II—then after the war, saw it being reestablished in 1945, then ceasing to exist altogether in 2003.

Important to know about Yugoslavia was that it was the one of the most ethnically and religiously diverse nations in Europe—was remarkable because its peoples had warred against each other for centuries—but under the stern leadership of Josip Broz Tito, who ruled as Prime Minister from 1944 to 1963, and President from 1953 until his death in 1980, this nation remained prosperous and peaceful—during his leadership saw Tito keeping Yugoslavia out of both the Soviet Union led Warsaw Pact and the United States led NATO—and whose crowning modern day national glory came when they were awarded the 1984 Winter Olympics.

The death knell for was sounded on 25 December 1991 when the Soviet flag flew over the Kremlin in for the last time signalling the end of Soviet Union, which made a new piece the needed to capture in “The New Great Game” on its march to capture the wealth of .

Most unfortunately for Yugoslavia was that it became a game piece at the same moment the vile socialist regime of President Bill Clinton took power in early 1992—after which the Clinton Regime flooded Yugoslavia with money and propaganda in order to reignite racial and religious hatreds, which predictably resulted in multiple wars—in 1995 saw the Clinton Regime forcing the Yugoslavian government to sign the one-sided Dayton Agreement laughably called a peace agreement—a “peace” agreement the Clinton Regime tore up when it began bombing Yugoslavia on 24 March 1999.

While watching the Clinton Regime preparing to begin its bombing of Yugoslavia, on 9 March 1999 the Kremlin elevated Federal Security Service Director Vladimir Putin to the powerful position of Secretary of the Security Council—three days after the Clinton Regime began bombing, on 27 March 1999, it saw Putin authorizing Yugoslavia to use secret Russian air defense systems to down one of America’s believed to be invisible stealth F-117A fighter bombers—on 12 June 1999 it saw Putin ordering Russian military forces to capture Pristina Airport in Yugoslavia before NATO did—on 9 August 1999 it saw Putin appointed as acting Prime Minister of the Government of the Russian Federation—and on 31 December 1999, it saw Putin assuming the Presidency of the Russian Federation, an office he still holds.

Among the many reasons this brief history of Yugoslavia is important for every American to know about is that Biden’s socialist forces in the leftist media are warning this week that “the United States is in the midst of a nonmilitary civil war”—a warning that followed by mere days Biden himself stating: “We’re facing the most significant test of our democracy since the civil war”—warnings of civil war coming at the same time a newly released poll found that two-thirds (66%) of Republicans living in southern states, including Texas and Florida, would approve of seceding from the United States to join a union of southern states, and among southern Democrats, 20% are in favor of breaking away and forming a new country—all of which has now been joined by the chilling image just published in the leftist Washington Post showing the ethnically partitioned map of Bosnia-Herzegovina, and neighboring Serbia and Croatia with the name “Yugoslavia” superimposed over the silhouette of the lower 48 States of America. 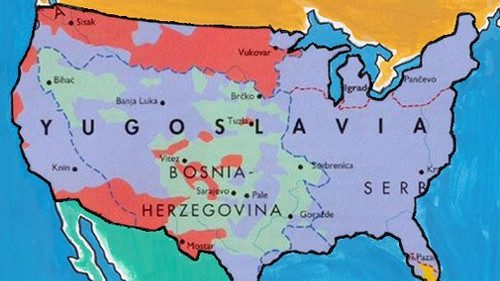 The demonic vileness of the leftist Washington Post publishing such a map depicting the United States as some kind of new Yugoslavia about to tear itself apart with ethnic and religious warfare causing the deaths of millions, matches them this past year publishing a genocidal article with a picture depicting Republican lawmakers as diseased rats needing extermination like the Nazis depicted Jews—and keep in mind, this publication is a “newspaper of record”, which means its editorial and news-gathering functions are considered authoritative and representative of the United States government.

As to the likelihood of the American people tearing themselves apart in racial and religious warfare to become another Yugoslavia, the leftist New York Times (another newspaper of record), in their just published article “How Racist Is America”, factually points out that the American “Melting Pot” is still today successfully blending all of its citizens into a single people as its done for over two-centuries—the greatest beneficiaries of whom are Hispanics, whose integration into American society is now surpassing in education and wealth creation that seen by other ethnicities, like the Irish, Polish and Italian peoples of a century ago—sees it correctly noting that there still exists an education and wealth gap between Blacks and other Americans—but fails to note that this gap between Blacks and everyone else in America has as its sole cause the deliberate destruction of the Black family caused by socialist Democrat Party policies. 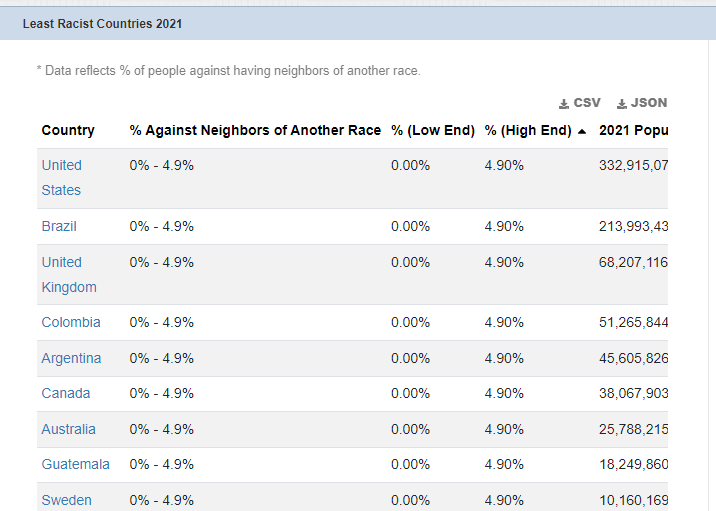 Two of the most critical facts being kept from the American people by Biden’s socialist Democrats and their leftist media propaganda sycophants is that the United States is the least racist nation in the entire world, and that only 9% of Blacks have received a Covid vaccine—but according to Biden, his socialist Democrats, and the leftist media, white Republican Party supporters of President Donald Trump have turned America into a racist hellhole and are evil killers because they refuse to be vaccinated against Covid—and today sees the leftist media demanding that all Trump supporters undergo deprogramming.

I’ve got to tell you right now folks, never have I seen anything like this happening other than in Yugoslavia when the socialist Clinton Regime sunk its rabid teeth into it—and if the American people don’t start waking up to what’s going on, the same thing is going to happen to them!

Unlike the unsuspecting people of Yugoslavia twenty-nine years ago, though, this time around there are those like the Dear Sisters that have been prepared and waiting for when these godless socialist monsters to try it again—and we’re striking back hard with everything we have  to keep true facts and information flowing to you!

However, and this you should all burn into your brains, YOU are actual combatants in this war—and our role, as I explained last month, is to be your intelligence corps providing you constantly with the true information and facts needed to defend yourself and your nation, and enlist other allies to our cause.

That’s why I’m echoing Sister Ciara’s plea to you yesterday to come to our immediate aid—aid that’s desperately needed as the tide of this war turns in our favor—but without which could very well see you losing the powerful weapons you have—called the TRUTH.

And for those of you who turn a deaf ear to this plea in our desperate hour of need, and it leads to our defeat, I’d like for you to remember that our enemies are powerful, ruthless, godless, and are already openly planning on putting you in torture camps for deprogramming—after which always follows extermination.