It seems like ages ago, but it was only last month, on 24 March, in fact, when I last wrote to you in my letter titled “Seriously, Why Can’t The American People See The Hellstorm Heading Right For Them?”—wherein I exposed for you the seeming “conflict” of power in the United States for the masquerade it really is—with my particularly warning you about the biggest build-up of American military resources since World War II.

On 13 April, just three weeks after asking in my letter to you why the American people couldn’t see the “Hellstorm” heading right for them, and right on cue, the United States, Britain and France illegally fired over 100 missiles into Syria—and whose reasons for doing so were exposed as not only being lies, but some of the most outrageous lies ever told. 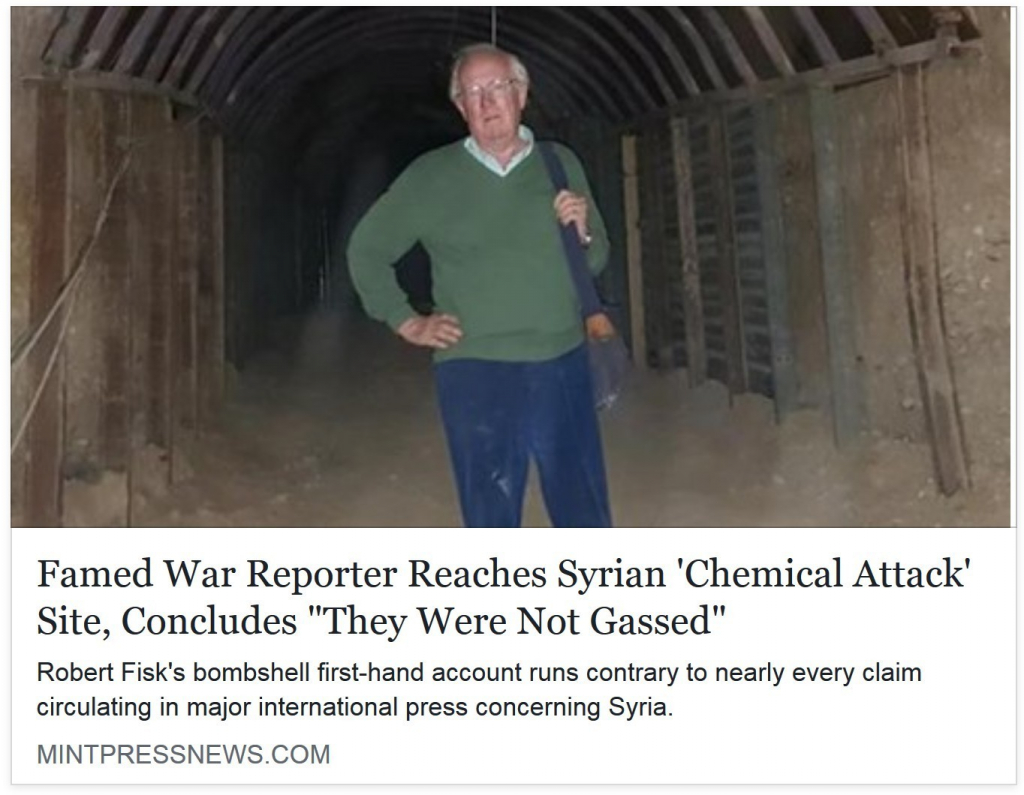 Well, and just like I did last month, I’m writing, once again, to give you a heads-up of what’s barreling down the road so, at least, you’ll know about what’s really happening, this time with my focusing on Republican Party US Congressman Mo Brooks—who, while facing a battle with “high risk” prostrate cancer, just gave a “come to Jesus moment” truthful answer as to why as many as 25 top Republican Party leaders in the US Congress, including Speaker of the House Paul Ryan, have suddenly resigned—and as Congressman Brooks himself stated, “they are retiring en masse because of assassination fears”. 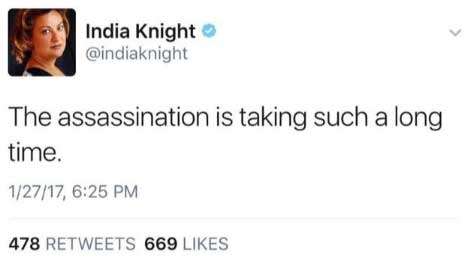 What the mainstream propaganda media won’t tell you about these Republicans fears of being assassinated is that it’s more than likely to happen—as everyone associated with President Donald Trump, including those who voted for him, are all now “targets of death” from one of America’s most powerful and subversive terrorist organizations known as “The Resistance”—one of whose main leaders is the former Obama-Clinton regime CIA Director John Brennan.

Being unprecedented in all of American history, you should know, former CIA Director Brennan, in speaking for “The Resistance”, maintains a continuous stream of vile invectives against President Trump on his Twitter account—that includes him proclaiming “when the full extent of venality, moral turpitude and political corruption becomes known, you will take your rightful place as a disgraced demagogue in the dustbin of history”, his declaring that “Trump's government is collapsing, let's emerge from this nightmare stronger”, and, just yesterday, after a US Congress cleared Trump of the absurd charge he colluded with the Russians, actually threatened the President of the United States by his stating: “A highly partisan, incomplete, and deeply flawed report by a broken House Committee means nothing. The Special Counsel’s work is being carried out by professional investigators—not political staffers. SC’s findings will be comprehensive & authoritative. Stay tuned, Mr. Trump....”. 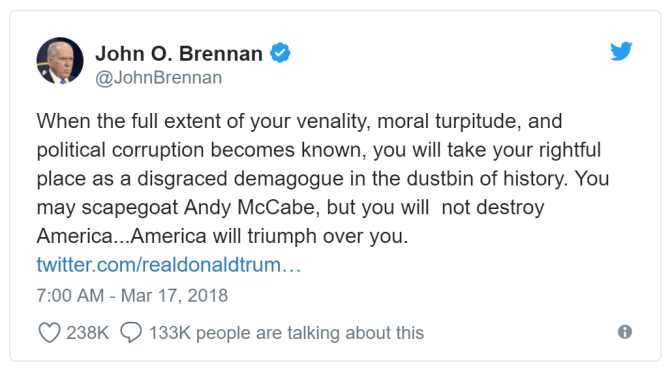 The “America” that former CIA Director Brennan proclaims to “The Resistance” will “triumph” over President Trump, you should, also, know, is not the one you’re familiar with—but, rather, is one that comes from the fevered radical communist mind of a man named Saul Alinsky, and two of its most ardent communist terrorist followers, William “Bill” Ayers and Bernardine Dohrn.

Thanks to Hillary Clinton, a great admirer of Alinsky’s blend of ruthless and stealthy activist communist tactics, and who wrote her 92-page college senior thesis on Alinsky’s theories—and Barack Obama, who taught workshops on the Alinsky communist method to destroy a government from within, and who received a political blessing in the living room of Bill Ayers and Bernardine Dohrn just prior to his being elected president—the entire government of the United States has been able to be infiltrated for the past nearly 50 years by radical communist “The Resistance” followers—but whose worst nightmare came true when President Trump took power, instead of them.

With these radical communist followers of Obama and Clinton having infiltrated into every corner of the US government, they have, also, taken over near complete control of America’s mainstream media and entertainment establishment too—and whose 90% negative coverage of President Trump explanation has been ripped right from the pages of Saul Alinsky’s communist instruction manual on how to overthrow the government titled “Rules For Radicals”—that instructs its communist followers in the media and entertainment industries to “pick the target, freeze it, personalize it, and polarize it”, and then destroy their target’s reputation as “ridicule is man's most potent weapon”—and whose evil vileness explains why Alinsky dedicated it to Lucifer. 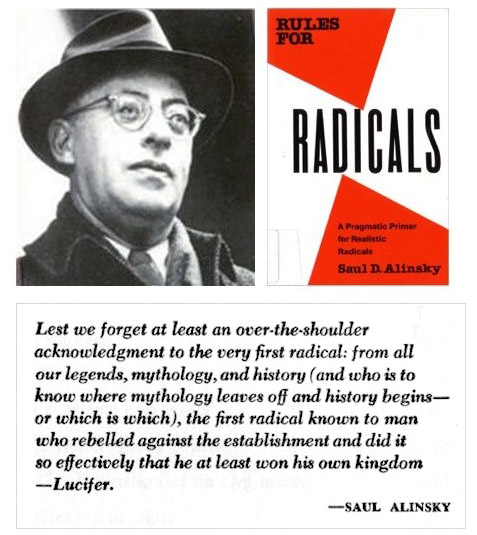 Even worse, I’ve got to tell you, for those thinking that the politically correct memes currently crushing American society, like “white privilege”, “struggles against sexism”, “multiculturalism”, etc., are somehow “new”—you couldn’t be more mistaken—as all of these memes being used to divide the people in the US today were concocted out of thin air by Bill Ayers and Bernardine Dohrn—and that they wrote about in their 1974 published communist manifesto titled “Prairie Fire: The Politics Of Revolutionary Anti-Imperialism”—and wherein they EXACTLY outlined their master plan to destroy the United States by dividing its peoples, that will then allow them to initiate what they call “mass militant action” towards their ultimate goal of:

Our intention is to disrupt the empire ... to incapacitate it, to put pressure on the cracks, to make it hard to carry out its bloody functioning against the people of the world, to join the world struggle, to attack from the inside.

Our intention is to engage the enemy . . . to wear away at him, to harass him, to isolate him, to expose every weakness, to pounce, to reveal his vulnerability.

It will not be immediate, for the enemy is entrenched and intractable.  It will require lengthy, deliberate political and armed struggle to build the organized power of the people and to wear away at the power of the enemy.

Many people have given their lives in this struggle and many more will have to. 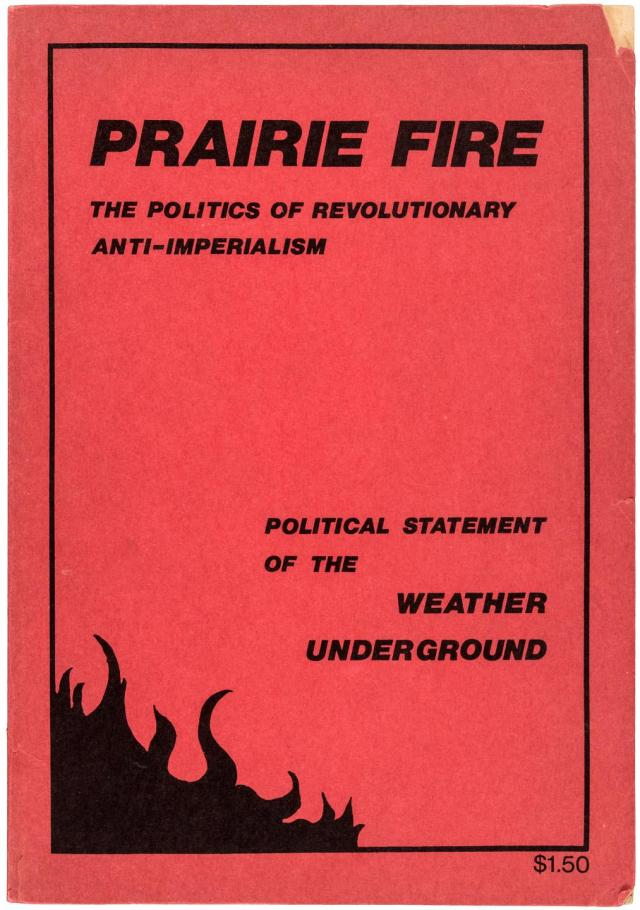 Now I’ve got to warn you folks, when these Obama-Clinton communist radical terrorists fighting against President Trump talk about the “many more” that will have to “give their lives”, they aren’t talking about themselves—THEY’RE TALKING ABOUT YOU!

This is known for a FACT because, in the early 1970’s, an FBI informant named Larry Grathwohl infiltrated Billy Ayers and Bernardine Dohrn’s communist terror organization and documented what their final plan for America was—and let’s let his own chilling words speak for themselves:

I asked, “Well what is going to happen to those people we can't reeducate, that are diehard capitalists?”  And the reply was that they'd have to be eliminated.

And when I pursued this further, they estimated they would have to eliminate 25 million people in these reeducation centers.

I want you to imagine sitting in a room with 25 people, most of which have graduate degrees, from Columbia and other well-known educational centers, and hear them figuring out the logistics for the elimination of 25 million people and they were dead serious.

If I’ve learned anything in my life, folks, it’s this—ordinary sane and morally upright people, like you, are absolutely incapable of imagining monstrosities such as this, because, frankly, our minds aren’t able to comprehend such horrors.

The masses of Republican Party leaders in the US Congress, however, are able to comprehend what’s going to happen, and is why they are fleeing—as well as the American elite class whose billionaires are buying and building survival bunkers the world over.

You, on the other hand, are being left to fend for yourselves in the chaos to come, with no one even bothering to explain what’s happening—and is why the Sisters of Sorcha Faal have devoted themselves to protecting you with every resource they have available—the most important being their providing one of the few remaining places you can go to learn about what’s happening.

The “early warning information system” the Sisters have created for you, though, can’t survive unless you keep it alive—and as Sister Ciara, in her report yesterday, “Stunning Experiment Proving God-Human Communication Link Blacklisted In West”, asked for your cooperation to do.

What Sister Ciara didn’t tell you was how close the Sisters are to ending their work for you altogether—not because they want to, but because too few of you help them—or anyone else for that matter, and is why the “New Paywall Era” is now overtaking everything—thus creating a world where only the richest of people will be able to get true news and facts.

So, by all means folks, please help the Sisters out today by clicking below and giving what you can to keep their mission alive—don’t you owe that to anyone who tries to help you by spending their money first in the hope that you’ll pay it back in kind?