Gozer the Gozerian Orders : “Choose The Form Of The Destructor!”

Since I last wrote to you, I’ve been observing everything happening in America and trying to think of how best to describe it to someone having no knowledge of President Trump, Hillary Clinton, the “Deep State”, coup plots, FBI texts, you name it—and what I keep coming up with is the hugely popular Ghostbusters movie that came out in 1984—and wherein an obscure deity named Gozer the Gozerian allowed humanity to choose their own demise and ordered them to: “Choose the form of The Destructor!”. 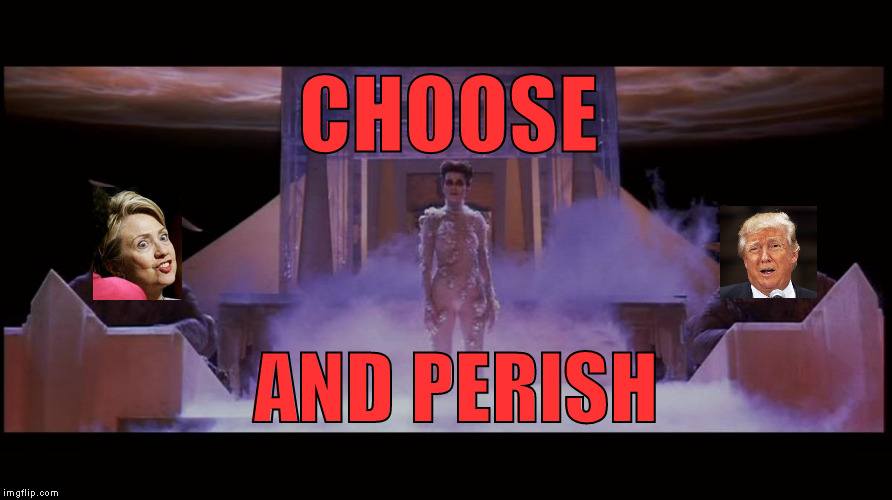 Now in this movie—whose being released in 1984 matches the name George Orwell gave to his dystopian futuristic book we’re actually all living through now—one of the heroes choose as the “destructor” the Stay Puft Marshmallow Man—who came as a giant, but that they were able to destroy—cue happy ending!

Today this “destructor” isn’t a fictional character, but a real life human being—and depending upon which side you’re on its name is either Donald Trump or Hillary Clinton—and every “right” or “left” associated with them.

But here’s the “thing”—and as the Sisters have long taught—individual human beings like Trump and Clinton, no matter how historic they may become, are nothing more, and nothing less, then zeitgeists—which is the defining spirit or mood of a particular period of history as shown by the ideas and beliefs of the time.

So, and in order to understand what is really happening, one must step away from the “personal” and wade into what this particular period in history we’re in is telling us—and in this case is showing that our entire world is undergoing a rare period of epochal change—that is a point in time beginning a new or distinctive period.

The Sorcha Faal, as many of you know, for over a decade has described the period of epochal change we’re in (via her monthly lectures) by using as one of her guides the generational theory book Fourth Turning—which describes the global upheaval experienced by humanity when one distinctive period gets destroyed by another—such as the Agrarian Age (farming) being destroyed by the Industrial Revolution (factories/manufacturing)—and that’s been ongoing for nearly 400 years as there still exists vast swaths of our world still living in Agrarian Age with nearly 2 billion people still existing by subsistence farming alone.

With each of these distinctive periods of history having formed their own distinct forms of government—with the Agrarian Age rule of monarchy (kings/queens/emperors, etc.) being ill suited to the needs of an Industrial Society—each epochal change in history has been accompanied by wars and mass political upheaval—after all, ruling elites don’t give up power without a fight.

But today, and unlike any other epochal change in history, a multitude of “ages” are crashing up against each other—with the Industrial Age still battling it out with the Agrarian Age—while at the same time, the new “ages” of Information Technology, Nanotechnology, Genetic Engineering and Artificial Intelligence have burst upon the scene leaving absolutely no one able to predict what’s going to happen next.

You should know that each of these new “ages” are labeled among the greatest global catastrophic risks whose destructive power could very well end life on Earth—and that, again, absolutely no one knows what to do about.

Let me clarify one thing though, when I say that no one knows what’s going to happen, and that no one knows what to do, I exclude the Sisters and others like them—who, unlike “modern” scientists, use our world’s most ancient religious texts as the path stones to acquire the knowledge needed to understand what’s happening—and in doing so, also, give to others the information they need to comprehend the nearly incomprehensible.

In our world’s most ancient past, a piece of fine-grained dark schist or jasper were used for testing alloys of gold by observing the color of the mark that they made on it—and that were called touchstones—but whose meaning today has evolved into being a standard or criterion by which something is judged or recognized—and which everyone should use to determine the truth.

Using the Sisters writings as a touchstone for truth has, also, aided thousands in being able to protect themselves—with some examples being of peoples in the Middle East heeding the Sisters warning of impending war and leaving—thousands of Westerners protecting their wealth by cashing out of the stock market and buying gold—and, most importantly, forewarning their readers of events soon to occur so that they would not be taken unaware.

In return for the unceasingly valuable work the Sisters do, they have only asked one thing—that YOU support them.

To those of you have, THANK YOU!

But for those of you haven’t, why not?

Is it because you believe the lie that everything on the internet is free?  If that’s so, let me tell you some simple facts—our servers used to give you the information you need cost nearly $47,000 a piece—and the anti-virus threat prevention software that has to used to protect these servers costs another $150,000.

So believe me when I tell you that anyone claiming that running an enterprise size “conspiracy” website like the Sisters is being done just to make money are telling you lies—because the truth of the matter is that NO ONE publishing news on the web makes any money—and is why billionaire oligarchs having been buying up news sites hand over fist.

And that is why when Gozer the Gozerian says “Choose the form of The Destructor!”—my mind goes to the millions of unsuspecting people who are doing exactly that by allowing the entire news media to be bought up and controlled by these monsters whose only goal is to keep their readers as dumb and helpless as possible—with the Sisters, and the few others left like them, being the only ones believing you’re worth being told the truth to.

We would like, of course, for YOU to support us as our needs (as always) are dire—but for those of you wishing to help others, please help out Zerohedge whose goals are “to liberate oppressed knowledge, to provide analysis uninhibited by political constraint and to facilitate information's unending quest for freedom”—or help out Rumormill News who have been “Serving Truth and Freedom Worldwide since 1996”—or help out AntiWar.com “Because your contribution will ensure a voice for peace”—or help All News Pipeline “Help keep independent media alive”.

No matter whom you help out, though, remember this—if you fail to heed the call of those in need who are keeping the truth flowing to you, the world you’ll soon be living in was described by George Orwell, and who warned: “If you want a vision of the future, imagine a boot stamping on a human face—forever.”