“In individuals, insanity is rare; but in groups, parties, nations and epochs, it is the rule.”

When President Vladimir Putin banned Western food imports in 2014 in a tit-for-tat measure over Western sanctions due to the Ukraine crisis, it came at the same time Russians had developed a taste for French and Italian cheeses—which afforded Moscow an opportunity it seized upon to put in place an “import substitution” strategy to support local entrepreneurs trying to set up businesses to replace imported goods.

Two such entrepreneurs were long-married high school sweethearts Elvira and Vyacheslav Kovtun—whose “Peshernyi” hard cheese they entered in this year’s World Cheese Awards in Bergamo-Italy—a competition similar to the Oscars given to films and their stars—where more than 3,800 cheeses from 42 countries are awarded supergold, gold, silver or bronze prizes—and at which saw Elvira and her husband Vyacheslav becoming the first Russians to ever win a gold prize.

After the Kovtun’s won the gold medal for their cheese, news of it was posted on the Twitter account “Good News”—which in the Russian language is “Khoroshiye Novosti” and is an information site devoted solely to posting good news and happy things about Russia—that is until the story was posted on “Good News” about high school sweethearts Elvira and Vyacheslav winning their gold medal—that was followed by Twitter shutting down the “Good News” site down without any explanation. 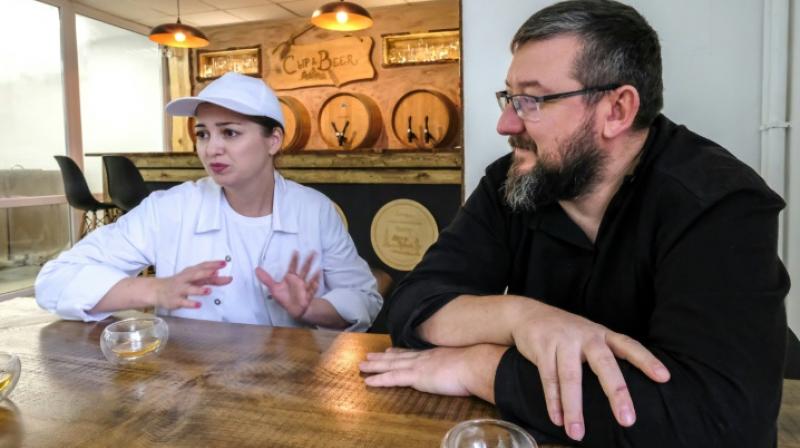 Twitter shuts down Russian “Good News” account after it posts story about Elvira Kovtun and her husband Vyacheslav Kovtun (both above) who become first Russians to ever win gold medal at World Cheese Awards.

What brought Twitter’s unexplained account suspension of “Good News” to my mind was a story I read this morning about how truly blessed the American people are today as they celebrate their Thanksgiving Holiday—all of whom live in a nation whose economic success under President Donald Trump is the envy of the world—and where a record over 55 million of its citizens are able to travel during this national holiday to see their loved ones because of the new found confidence they’ve been given.

Like Twitter, though, the entire American mainstream media has an absolute hatred of “Good News”—because at the exact same time their nation’s citizens are celebrating with confidence this Thanksgiving—they’ve decided to ignore every good economic story in their nation while going into a full blown panic about parade balloons. 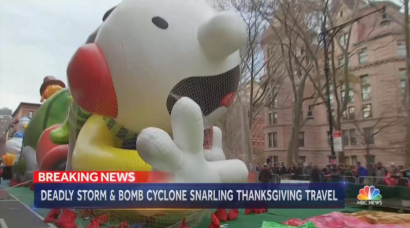 Now there are many definitions for the word insanity—such as the state of being seriously mentally ill, madness, loss of reason, hysteria, unsoundness of mind and craziness—but as it applies to what is now happening in America, I find myself remembering this truism stated by 19th Century philosopher Friedrich Nietzsche—“In individuals, insanity is rare; but in groups, parties, nations and epochs, it is the rule.”

As I’m sure everyone of you will agree, we all have family members, friends and acquaintances we’d describe as nutty, batty or eccentric—as well as our knowing that there are those whom we know that feel the same about us—but to meet a real insane person is a rarity reserved near exclusively to those working in the mental hospitals—as insane people are extremely dangerous and a threat to life to themselves and others.

In an epoch, however—which is the beginning of a distinctive period in the history of someone or something—insanity is not only the norm, it’s the rule—and in this particular one we’re living through we can rightfully call the Donald Trump Epoch, it bears our taking a short journey back in time to see how this epoch began.

A journey to the start of this epoch sees our first and most important stop being in 2016 when Donald Trump was elected to be the President of the United States—an election win by Trump said to have been masterminded by Russia—but in the conclusions reached about the 2016 election by the Proceedings of the National Academy of Sciences of the United States of America (PNAS), they found that of all the social media accounts by Russians that could have possibly been seen by American voters:  “We find no evidence that interacting with these accounts substantially impacted political attitudes and behaviors.”

If it isn’t really true that caused the insanity this epoch was begun with, you may ask, what did?

For that answer we journey back to early 2017 and two people—the first one being FBI Attorney Kevin Clinesmith, who created the FISA warrant to spy on President Trump and then proclaimed “I Have Initiated the Destruction of the Republic!”—and the second being an attorney named Mark Zaid, who 10-days after Trump was sworn into office, posted his prediction declaring “coup has started… first of many steps…rebellion….impeachment will follow ultimately”—an impeachment prediction Zaid made come true as he’s the attorney for CIA whistleblower Eric Ciaramella whose made up lies Trump is now facing impeachment for. 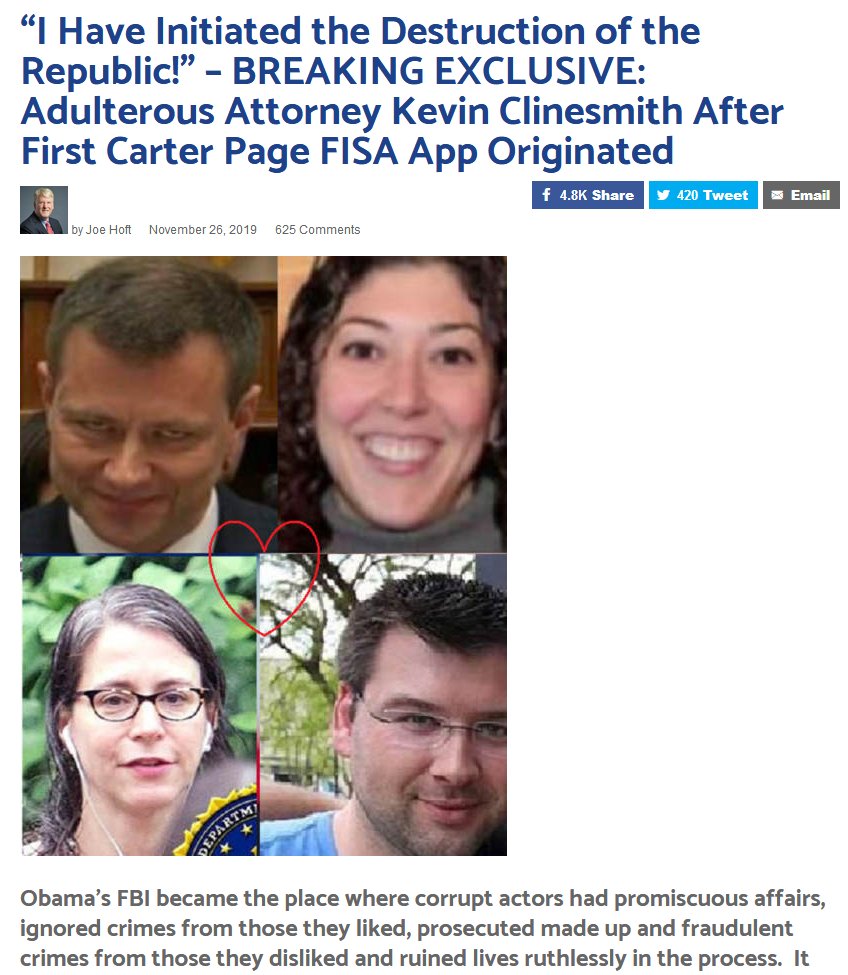 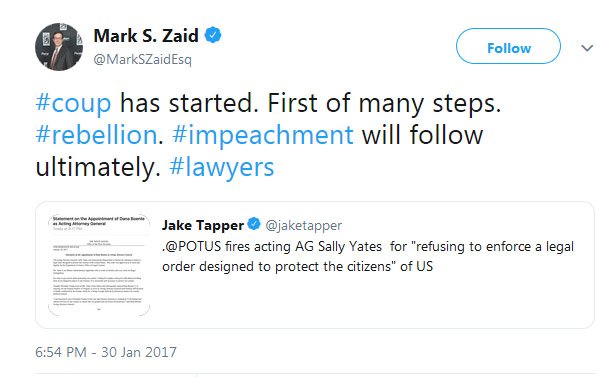 It goes without my having to remind you that FBI Attorney Kevin Clinesmith and attorney Mark Zaid are just two bit players in the attempted overthrow coup of President Donald Trump whose cast of characters and their crimes are extremely well documented for anyone caring to know them—but who both do provide us the knowing of the insane mindset which kicked off this epoch we’re now living in—as no person of sane mind would wish for their own nation to be destroyed, or see its democratically elected leader be overthrown in a coup.

Which brings us on our journey to of all places the State of New Jersey—where thanks to the highest property taxes in America and an unsustainable cost of living, 44% of its residents say they plan to leave there in the “not so distant future”—many of whom we can assume live in the small community of Whippany-New Jersey represented by moderate Democrat lawmaker US Congresswoman Mikie Sherrill—a rather safe assumption based on the fact that when Congresswoman Sherrill held a town hall meeting of its citizens this past week, it blew up in her face when she was confronted by a wave of anger of these citizens outraged by the unjust impeachment coup against Trump—and where one of its citizens “very disturbed” about Congresswoman Sherrill stated: “I thought, by now, after the two weeks of hearings, she would have seen, ‘Oh, my God, there’s nothing there.’” 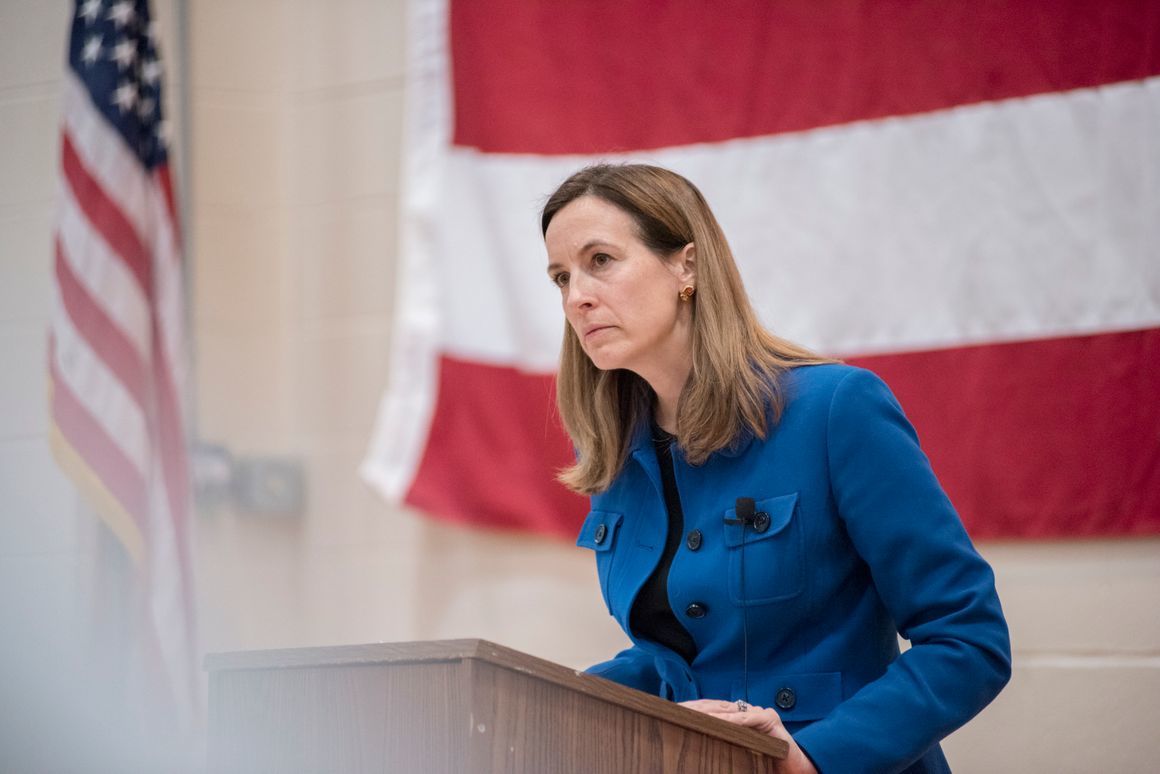 US Congresswoman Mikie Sherrill (above at Whippany-New town hall meeting on 25 November 2019) faces the wrath of her voters angered at how unjustly President Donald Trump is being treated by Democrats.

Congresswoman Sherrill isn’t alone in facing the wrath of her voters enraged over what’s being done to President Trump—and is why top Democrats have conceded that they’re losing this impeachment battle—a losing overthrow coup effort being met by the campaign manager of newly entered Democrat presidential candidate for Mike Bloomberg having just dropped a bombshell on CNN yesterday with his truthfully saying: “Impeachment Proceedings Are Making President’s Re-election More Likely, Not Less”.

Which brings us to the final stop of our journey into learning about this new insane epoch we’re living in—YOUR DOORSTEP!

Where if you imaginatively peer towards right now on this most blessed of Thanksgiving days—you’ll see me and my Dear Sisters huddled with open hands in the hope you find us worthy of dropping a few morsels from your banquet feast table into.

Upon your dropping these few morsels into our hands, our Lord magnifies your kind hearted generosity into a magnificent creation that allows your fellow citizens in Whippany-New Jersey—and indeed throughout your great land—to know true things—the proof and evidence of which can be seen in how we, and others like us, have taken on the entire corrupt American mainstream media and are winning against them—after all, how else can you explain the mainstream media’s total and absolute failure to keep the truth from being known other than with the word miraculous!

Our demonic enemies controlling the insanity of this epoch know this fact too—and is why they harden the hearts of those not wishing to share the bounty of their table with those seeking aid for others—but to defend against, our Lord has given us direction with the words I pray your heart can hear today: “Now he who supplies seed to the sower and bread for food will also supply and increase your store of seed and will enlarge the harvest of your righteousness.”

(Please note that those who respond to this appeal, in any amount, will receive, at no charge, Sorcha Faal’s November, 2019/December, 2019 lecture series to the Sisters of the Order titled “Total War: the Collapse of the United States and the Rise of Chaos: Part 93”.  This is another one of the Sorcha Faal’s most important lectures dealing with the coming timelines of war, famine, catastrophic Earth changes and disease as predicted by ancient prophecies.)