Lucifer Unleashed Against President Trump As Last Stand For Begins

“The essence of the devil is the lie, and he defines himself as: 'I am who am not’—Lucifer has very little trouble with those who do not believe in him; they are already on his side.”

Yesterday, my Dear Sisters included in their report to you truthful information showing that for 35 straight months, even before President Donald Trump took office, his enemies have sought to impeach him and throw him from office—and towards that end have compiled a list of 89 offences they say he can be impeached for—a number so large one could be excused for breaking into laughter about—that is until they read a little known February-1974 document titled Constitutional Grounds for Presidential Impeachment written during the Watergate Scandal that forced the resignation of President Richard Nixon.

The main author of this document was a young staffer on the United States Watergate Committee named Hillary Rodham—today known as Hillary Clinton—who was tasked to write it by her boss John Doar, who was the Special Counsel for the United States House Committee on the Judiciary—and wherein Rodham-Clinton and her team asserted that the US Constitution’s “High Crimes and Misdemeanors” standard for what a President could be impeached for was able to be ignored by the US Congress and replaced with whatever its members decided among themselves was an impeachable offence—its stating that more impeachment offenses leveled against a President were advisable than just a few—and if used, would have denied President Nixon the right to counsel as the committee investigated whether to recommend impeachment. 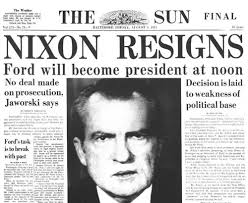 During the 2016 presidential election, Hillary Clinton’s work in overturning the US Constitution’s standard for impeaching a President—to include denying a President the ability to defend themselves--was obfuscated by competing claims over if she had been fired by the Watergate Committee—with Jerry Zeifman, General Counsel to the Watergate Committee during the Watergate hearings, in his book Hillary's Pursuit of Power, and during multiple interviews, accusing her of being a “liar”, “unethical” and “conspiring to violate the Constitution” during the impeachment inquiry into Watergate, and was the reason he fired her—but was a claim countered by the Clinton supporting liberal media who said this wasn’t true.

As in all cases where the truth between competing claims have to be decided, they are put through what is known as a Process of Investigation—which is a progression of activities or steps moving from evidence gathering tasks, to information analysis, to theory development and validation, to forming a reasonable ground to believe—and as it pertains to if, or if not, Hillary Rodham-Clinton was fired for being a “liar”, “unethical” and “conspiring to violate the Constitution”, can only use past and present evidence existing at the time she was fired—thus ruling out anything that happened afterwards, even if it appears to be relevant. 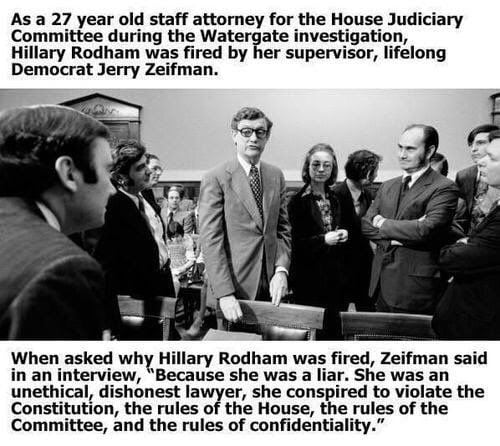 The evidence proving beyond the highest standard of reasonable doubt that Hillary Rodham-Clinton did, in fact, “conspire to violate the Constitution” can be seen in her creation of the “Constitutional Grounds for Presidential Impeachment” document against President Nixon—specially because it violates the Sixth Amendment that guarantees the right of all American citizens to retain or have appointed counsel represent them against any kind of charge and/or offense leveled against them, but that she sought to deny to Nixon—and explains why he resigned when faced with the prospect of not being able to have an attorney defend him.

Furthermore, and using the same highest standard of reasonable doubt, the evidence that Hillary Rodham-Clinton is, indeed, a “liar” and “unethical” can be found in her 2 May 1969 college thesis titled “There is Only the Fight: An Analysis of the Alinsky Model”—wherein she extols the radical ideology of Marxist communist Saul Alinsky—who in his manifesto for the overthrowing of the United States by revolutionary force, tells his resister-revolutionaries that any lie can be told and spread as long it works to achieve their goals—a communist manifesto aptly named “Rules for Radicals”—and which Alinsky dedicated to Lucifer who he said was “the very first radical known to man who rebelled against the establishment and did it so effectively that he at least won his own kingdom”. 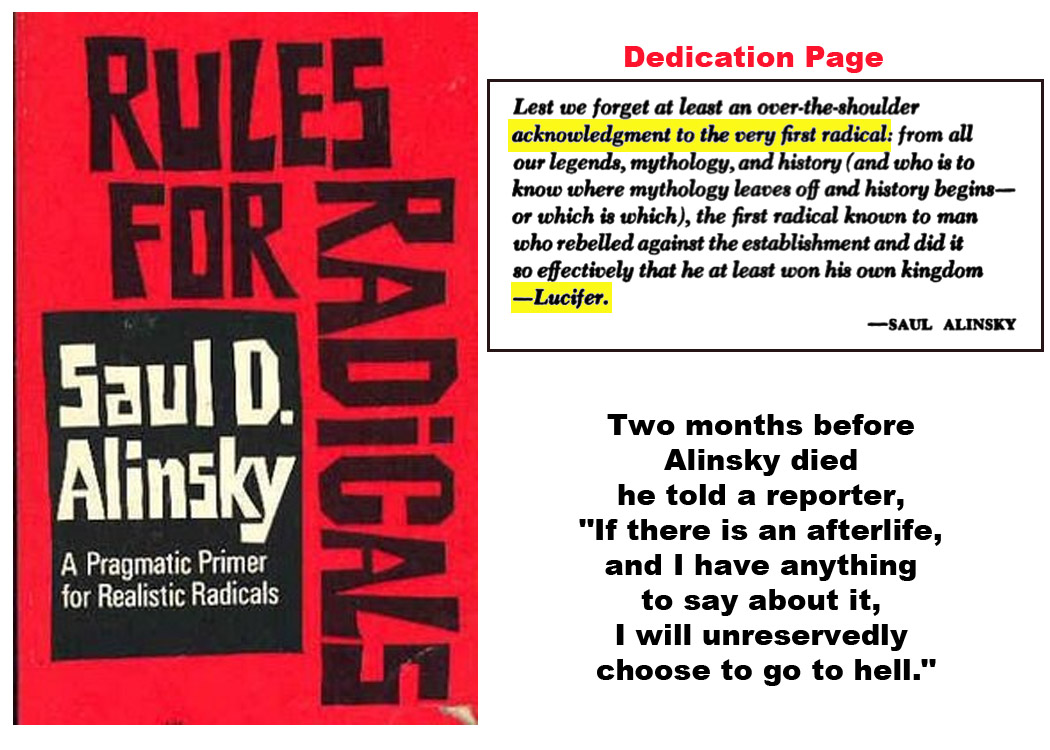 The information analysis of the evidence proving beyond the highest standard of reasonable doubt that Hillary Rodham-Clinton was an “unethical liar conspiring to violate the Constitution”, overwhelmingly leads to the conclusion that she was fired as Watergate General Counsel Jeffrey Zeifman claims she was—which then starts the theory development phase of this Process of Investigation to hypothesize that her actions were based on her intention to overthrow the existing government of the United States for the purpose of making it a socialist-communist state—but in the validation phase of this investigation, must be supported by further evidence proving that she actually intended to do so—and if true, would see Rodham-Clinton, and the forces supporting her, attempting  to force upon America the radical communist revolutionary agenda outlined by her mentor Saul Alinsky—and whose 8-Steps to accomplish are:

1) Healthcare — Control healthcare and you control the people

2) Poverty — Increase the Poverty level as high as possible, poor people are easier to control and will not fight back if you are providing everything for them to live.

3) Debt — Increase the debt to an unsustainable level. That way you are able to increase taxes, and this will produce more poverty.

4) Gun Control — Remove the ability to defend themselves from the Government. That way you are able to create a police state.

5) Welfare — Take control of every aspect of their lives (Food, Housing, and Income).

7) Religion — Remove the belief in the God from the Government and schools.

8) Class Warfare — Divide the people into the wealthy and the poor. This will cause more discontent and it will be easier to take (Tax) the wealthy with the support of the poor. 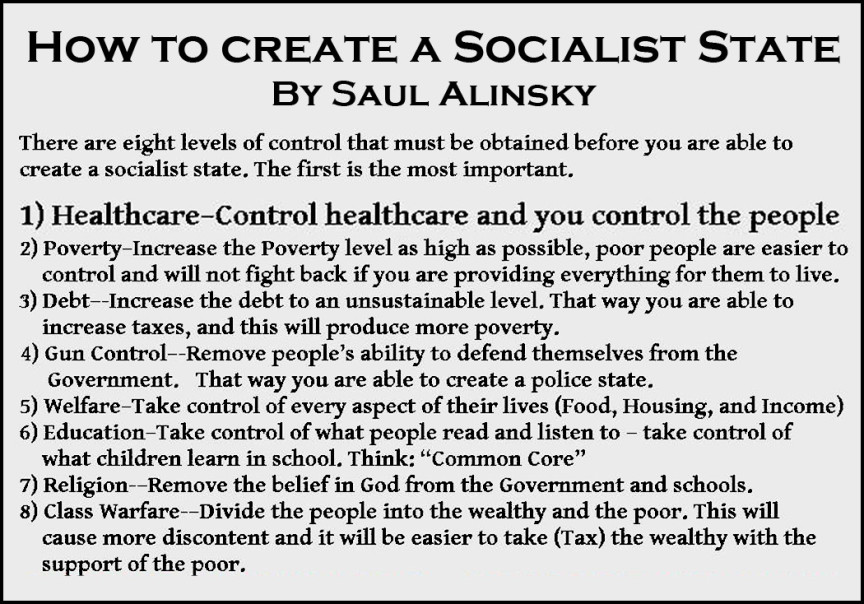 By my following the Process of Investigation to show you the grave and present danger the American people are truly in today, I must sadly tell you its now become much worse than you can even imagine—and is because of man named William Weld who worked with Hillary Rodham-Clinton on the Watergate Committee to bring down President Nixon and help her write her anti-Constitution document—and who is now saying that not only must President Trump be impeached, he should be executed too. 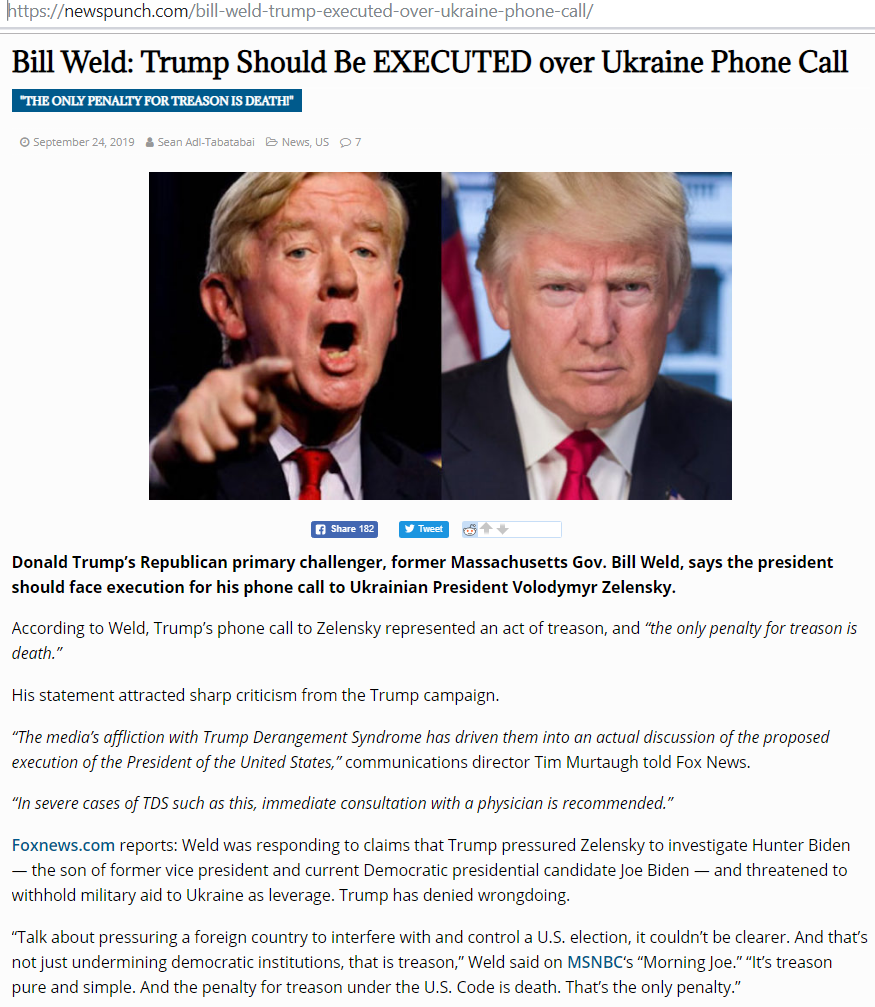 Over the coming days, weeks, months, and even years if need be, my Dear Sisters will keep arming you with the true information and facts you need to battle against the Forces of Lucifer trying to destroy President Trump and the American people—such as Trump now being viciously attacked for asking the President of Ukraine questions about corruption in his country that may have been committed by former Vice President Joe Biden and his drug addicted son Hunter—questions that Trump actually had no choice but to ask, as the Constitution he swore an oath to uphold makes him the top law enforcer in the United States—and if failing to ask, would see him breaking this oath.

These facts and truths, though, can’t keep coming to you unless you first realize the grave danger you’re in—and when realizing—start supporting those few of us left still doing so—otherwise, all you’ll be left with are lies told to you by Lucifer and his followers—all of whose names and mainstream media organizations you already know without me having to tell you.

Our Lord, of course, knows all about what’s going on—and is why He gave you guidance to follow in this matter—“A generous person will prosper; whoever refreshes others will be refreshed.”—and makes my heartfelt prayer for all of you that you’ll follow to see how gloriously true these words really are!

(Please note that those who respond to this appeal, in any amount, will receive, at no charge, Sorcha Faal’s September, 2019/October, 2019 lecture series to the Sisters of the Order titled “Total War: the Collapse of the United States and the Rise of Chaos: Part 91”.  This is another one of the Sorcha Faal’s most important lectures dealing with the coming timelines of war, famine, catastrophic Earth changes and disease as predicted by ancient prophecies.)