“Hypocrisy can afford to be magnificent in its promises, for never intending to go beyond promise, it costs nothing.”

My Dearest Friends—As I write these words to you today, with just 11 weeks to go before one of the most crucial American elections in modern times, you should know that the most powerful leftist-aligned technology companies in the United States are now secretly gathering to prepare their “election strategy” to thwart your will—and the world’s most secretive globalists have gathered at the US Federal Reserves annual Jackson Hole conference in Wyoming—with their “End Game” goal being the creation through this election of a Democratic Party lynch mob that will descend upon President Donald Trump and destroying him forever.

You must understand, though, that their wanting to destroy to President Trump has little to do with him, as YOU are their main target—as the value of Trump to the Trump voter is that he is all that stands between them and handing the keys to Washington back over to the people inside Washington.  That’s it.  He’s your only option. You’ve got to pick the insiders or him.

For years, these globalist elites believed that liberal democracy would gradually spread around the world, but their system has eaten itself and the result is a new global populism—that demands the peaceful co-existence of different politico-theological ways of life—with co-existence, of course, creating the background of a smooth functioning world of global capitalism enriching everyone—and that President Trump is by no means the leader of, as he is but the manifestation of his peoples will to reclaim their right not to be continually lied to and deceived by their rulers.

The election of Donald Trump, therefore, so enraged these globalists that they did away with the near-universal agreement over the right to speak, driven by a false belief that too much free speech helped Trump get elected—and that large numbers of Americans began not just to tolerate, but is now seeing them demand censorship—that’s being exploited by the Democratic Party who have formulated a two-prong attack to: 1.) Take down the elected President of the United States—and—2.) Concurrently destroy a thriving alternative media questioning the official narrative at every turn.

The headwinds, so to speak, being run into by the Democratic Party and its mainstream media establishment allies to effectuate this two-prong attack, however, can be summed up in one word, “hypocrisy”—that’s the practice of claiming to have moral standards or beliefs to which one's own behavior does not conform—and too their great error in using it against President Trump, is that it’s the most hated of all human vices—and the easiest to expose.

Standing alone among the American mainstream media in not using “hypocrisy” as means to destroy President Trump are The Wall Street Journal and Fox News—with The Wall Street Journal being America's largest newspaper by paid circulation with more than 2.2 million subscribers, and Fox News being the most-watched cable news television programme—but whose “voices in the wilderness” have nowhere near the reach as their leftist opponents do.

And that is where we, and other alternative news sites like us, come in—by our saturating the American populace with continuous examples of Democratic Party and mainstream media establishment “hypocrisy”—that in the past week alone has seen the leftist mainstream media running banner headlines claiming that Trump ICE forces had arrested an illegal Mexican alien for simply driving his pregnant wife to the hospital, but who failed to mention that he was wanted for murder in Mexico—their failing to even report that the co-chairman of Democratic Party, Keith Ellison, was credibly accused by his former girlfriend of sadistically beating her—their failing to report that one of the main leaders of the #MeToo movement, Asia Argento, had paid nearly $400,000 to keep hidden her rape of a 17-year-old boy—and their deliberately removing from their headlines the word “undocumented” from articles about the illegal Mexican murder of Mollie Tibbetts in order to keep the truth of it hidden—their keeping totally silent after Lanny Davis, the attorney for Michael Cohn, destroyed the entire Trump-Russia Dossier by his stating Cohn “Never, Never, Never” did anything this fake document said he did—and their keeping completely hidden the fact that the Russian attorney, Natalia Veselnitskaya, who met with Trump campaign officials was working out of a President Obama office in Washington.

You know well, too, that these are but a minor few of the examples of Democratic Party and mainstream media “hypocrisy” that we, and others like us, keep exposing—but instead of us being celebrated for keeping the truth flowing, we all now see ourselves under the most sustained attack against the “real free press” ever seen in American history—that the leftist forces in the United States are even actually celebrating, but you should know pose the greatest danger to your nation it has ever faced—and just to mention one of these grave threats, a hopeful Democratic Party US Congressman named Scott Wallace—a multi-millionaire who plans to impose on America a population control regime that advocates: “Irresponsible people who have more than two children should be taxed to the hilt for the privilege of irresponsible breeding”.

If this type of leftist-socialist dystopia is what you want for America, then you are most certainly in the wrong place—but if, on the other hand, you don’t want to see your nation destroyed by those who believe they are smarter then you, start doing something about it! 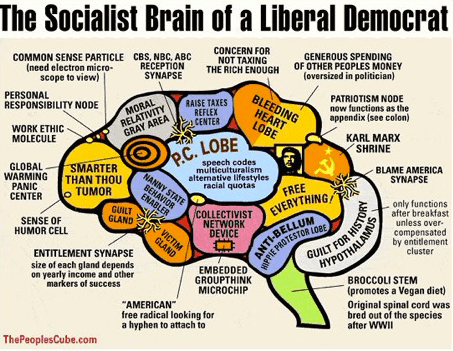 After all, don’t you even know that we’re winning?

For example, after their massive failure to accurately predict the outcome of the 2016 presidential election, CBS News remade their entire internal polling organization—and that even though they won’t tell their own readers and viewers, has them now saying that they can’t see any “Blue Wave” at all coming during the 2018 Midterm Elections that would put the lynch mob Democratic Party back in power—and whose findings are supported by new polling showing that Democratic Party US Senator Bill Nelson is headed for defeat in Florida, as so is too Democratic Party US Senator Tammy Baldwin who is, likewise, heading for defeat in Wisconsin.

Now you don’t have to be an election or political expert to know that these very troubling Democratic Party polls are going to cause the unleashing against President Trump of a virtual tidal wave of attacks that will pale in comparison to all past ones—that have all failed due to their being exposed for the lies that they are—but you do have to WAKE UP and face the reality that our battle against these monstrous forces is your battle too!

And I’ll be honest with you, there has been nothing more disheartening to me over these past few weeks then seeing these leftist-socialists band together to donate $459,000 to Trump-hater and former FBI Countertenor Chief Peter Strzok—along with their donating a further $554,000 to former FBI Assistant Director Andrew McCabe (both of whom were top masterminds in clearing Hillary Clinton and launching the coup against President Trump)—while at the same time, those of us seeking to keep America free are left begging like paupers so we can continue keeping the truth flowing.

So let me respectfully ask all of you now—what kind of country celebrates two fired government officials attempting to overthrow a duly elected president by showering them with over $1 million—while at the same time turning away from those pleading for a bare fraction of that amount in order to survive the greatest onslaught against press freedom ever witnessed in American history?

I posit to you that this is a nation nearing its own moral, social and political destruction—whose carcass will picked over by globalist dogs leaving people like you nothing left to fight for—but that good and honest people, just like you, can stop from happening if you’d just open your minds and hearts to support those of us on the front lines of this war trying to keep you free—and whose “End Game” outcome is just a short 11 Weeks away—that your $20 gift to us, today, will ensure our victory of!

(Please note that those who respond to this appeal, in any amount, will receive, at no charge, Sorcha Faal’s August, 2018/September, 2018 lecture series to the Sisters of the Order titled “Total War: the Collapse of the United States and the Rise of Chaos: Part 79”.  This is another one of the Sorcha Faal’s most important lectures dealing with the coming timelines of war, famine, catastrophic Earth changes and disease as predicted by ancient prophecies.)